“Desiye, we have to do this…for Africa for the world to know of Ethiopia’s contributions to music…we must respect the Bush People…we are the Scientists in Sound…”. This sentence began a five-week uphill journey for the Father of Ethio-Jazz, Dr. Mulatu Astatke and I, though it felt more like a barefoot climb up a steep stony mountain for us both, but that’s another story, maybe even a book or movie LOL. The composer’s love of country and continent, expressed though his music, proved to be a powerful unstoppable force and I am honored he entrusted me to administer and curate his epic vision.
Bob sings, “Hit me with music, when it hits you feel no pain…” and according to the Marley metaphor, we were beautifully brutalized and treasured every bit. I confidently speak for the hundreds in town for the World Press Freedom Day, amongst others gathered at Addis Abeba City Hall Mehzehgahjah bet bearing audio and visual witness. The fusion of frequencies realized through the syncopation of organic polyrhythms with contemporary compositions on indigenous and electrified instruments took us on a journey through time and space to the substratum of instrumentation and the future of jazz, simultaneously. The Self-proclaimed Scientist in Sound, rightly so according to his Harvard and MIT collaborators on his various theories, shared his laboratory for a full 90 minute concert upon the invitation of UNESCO for International Jazz Day.
The show began with a softly lit stage, against a large original backdrop by renown Ethiopian Artist Merid Tafesse, designed by Birhan Tonge, with a platform front and center holding Dr. Mulatu’s vibraphone and his tightly tuned conga drums and a host of percussions flanking the mellow jazz god. The sound of his key instrument filled the house, the acoustics were sweet in the JonHoi built theater, giving off a reverent vibe. A couple tunes in the mood began to crescendo into a fusion of funkiness. No other words can describe the ear experience not to mention the optics of the convergence of history and the future. The light trusses began to swivel spreading bright red and white lights across the stage, accenting the movement of the Dorsey in a choreography with half a dozen chanting elderly women dressed in white Habesha libs; juxtaposed to the men attired in their familiar red, gold and black woven fabric, flying like wings of a large bird across the stage during their high leaps and hunting gestures. And just when you think it can’t get crazier, in a jazz kind o’ way, the virtuoso invites visiting Mozambican saxophonist, Moreira Chonguica to join him on stage for an impromptu solo, where the famous musician blared the smoothest African jazz straits right into the heads and hearts of the audience. WOW! Dr. Mulatu was happy to have his newly met musical son join him and the bush people on stage.
Then as Dr. Mulatu schools if not diplomatically scolds the audience of international cultural representatives on the origins of contemporary instruments, asking rhetorically “what came first?” He continues the musical treat with half a dozen cocoa complexioned young men who glowed beautifully in white cotton robes as they huddled in a circle to the left of the conductor’s vibraphone, with indigenous Gamo horns and a sole k’rar, creating sounds that mimic nature such as powerful winds, lion’s roars and camel exhalations, merging perfectly with rhythmic jazz background in another brilliant composition by the Maestro. Then the stage exploded with another dozen Zumbara including two young sisters holding soprano range vocals and calabash shakers. The genius composer created a propulsive rhythm in a flawless harmonious cacophony of sound with up t0 2.5 meter long traditional horns made from myriad organic materials, taking us into a strange new world. You could see everyone wanted to jump to their feet in celebration of the Scientists in Sounds. As I watched to ensure all was well on stage I asked myself how is this sound so futuristic yet so ancient? Why don’t we all know about this yet we know about Beethoven and Bach? Seriously?! SMH.
In closing all I can say is it was a tremendous display of African jazz genius and we give thanks to all the lovers of music, Mulatu and Mother Africa who came to the rescue including Gesh Zerihoun Tecle, Webe Shebelle Hotel, RIDE and Coke. The Pan African Poster Child in Jazz, Gesh Mulatu, has stood firm and proud as an Ethiopian musician for five decades, continuously inventing and unearthing styles of sounds carried across the water centuries ago, resurrected as jazz in the African Diaspora. He pays homage to Duke Ellington, Charlie Parker, John Coltrane and Miles Davis and countless others with counterparts Tony Allen, Hugh Masakela and Manu Diabango who he recognizes as Brothers in the lab. Dr. Mulatu, we thank you for revealing melodic truths to the world with an unapologetic message asserting pride in origin and identity.

THE ART OF NEW YEAR

The Other Side of Debt Financing 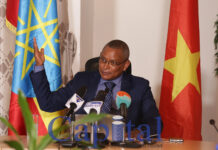 Twenty six thousand condos to be transferred this September

TIME TO TALK TECH AND ART

ANTHEM FOR AND BY BROWN SKIN GIRLS WITH NAPPY HAIR