ADMAS, a 1980’s Ethiopian band consisting of Abegasu Shiota, Henock Temesgen, Tewodros Aklilu and Yosef Tesfaye, recorded “Sons of Ethiopia” in 1984; a long lost album now revived. Washington Post’s Chris Richards, calls the Frederiksberg Records re-release “…rare…precious and inimitable…sounds like nothing else. Admas specialized in paradox, generating exquisite new grooves that felt high-tech and low-budget, worldly and local, futuristic and nostalgic, funky and delicate…an expression of exploration and loss.” Admas was trained in music during the early Derg Era, but following the Red Terror, they fled to Washington DC, creating music to fit those devastating times.
After 35 years in the music industry, working exclusively with artists on the cutting edge of social issues, I can say “Sons of Ethiopia” is a truly delightful discovery. My career in Artists Management began in New York City in 1985 so I am too familiar with the sounds of that period. The last track on the album, “Tez Alegn Yetintu,” is moving with its melodic filled two-minute intro followed by almost six minutes of keys and synthesized sounds including the good ole drum machine keeping copious timing. But if you close your eyes and listen carefully, recalling the rich history of Ethiopian music and maestros like Dr. Mulatu Astatke and crooners like Mahmood Ahmed, you can imagine a stage filled with the Ethiopian band of brothers, donning carefully coiffed afros, dressed in the best Habesha libs, pouring out their hearts – pain and hope, anger and love, despair and defiance – forcing you to sway and groove to their infectious rhythms. Needless to say, this precious find is a great addition to the discography of Ethiopian music, providing both pride and pause, available on youtube.
All things considered, humanity’s pursuit of happiness has been expressed in many forms worldwide. However, I nominate African Americans for the prize of the broadest spectrum of expressions bringing attention to injustice. Artists like Billie Holiday, John Coltrane and painter Romare Bearden were part of the 1920’s cultural explosion historically known as the Harlem Renaissance. While 1968 Olympic “fists up” athletes Tommie Smith and John Carlos, and most recently NFL’s Colin Kapernick, taking a knee during the anthem, have ensured representation in sports spaces. Naturally African American preachers and politicians have also taken the helm with their voices including the right Reverend Martin Luther King Jr. who preached non-violence from the pulpit of Atlanta’s Ebeneezer Baptist Church. Both King and Ebeneezer would come to the forefront this week as Congressman John Lewis, one of the “Big Six” organizers of the DC rally famous for the MLK “I Have a Dream” speech, was laid to rest at Ebeneezer. Eulogized by President Barak Obama with speeches from Presidents Bush and Clinton, it was a fitting farewell for the congressman dubbed the “Conscience of the Congress”.
Lewis endured police beatings and numerous arrests from the age of 20, all part of plans and sacrifices leading to major changes in America’s racist laws and policies including the 1965 Voting Rights Act. He was a husband, father and mentor to many; a legend who also loved Africa. His visit to Ghana during the Year of Return also commemorating four hundred years of slavery in America was exactly one year ago with U.S. House Speaker Nancy Pelosi, by his side, condemning slavery as a “grave evil”. Honorable John Lewis’ last photo opp at age 80, was just a few hours after receiving chemo therapy for pancreatic cancer last month. Arms crossed, standing strong and steady on the newly named Black Lived Matter Plaza, feet from the Whitehouse and its current clueless occupant; a photo does say a thousand words. But in true Congressman Lewis form, who was always surrounded by young people, you can enjoy his presentation, more like a performance, dancing to “Happy” by Pharrel Williams in his office; recorded by his cajoling staff with the US flag, solemnly standing in the background, reminding us that even the most serious spaces dealing with the most confounding issues, find time to be happy for the blessings we do have.
Lewis’ name was added to the Diaspora African Forum (DAF) Sankofa Wall in Accra Ghana, next to his wife’s name, Lillian Miles Lewis, placed there by the Congressman exactly a year ago. Ambassador Erieka Bennett, Head of DAF Mission, reminded the socially spaced attendees of all walks of life, “As we celebrate 2020 Emancipation Day, we also celebrate the life and legacy of a dear Brother, friend and fighter for equal rights who often urged us saying, “Let’s build a new world together…now go get into good trouble…” “.
Dr. Desta Meghoo is a Jamaican born
Creative Consultant, Curator and cultural promoter based in Ethiopia since 2005. She also serves as Liaison to the AU for the Ghana based, Diaspora African Forum. 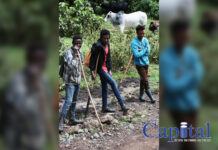 Water, sanitation and hygiene for all schools in Addis