“From royals to the everyday people, the bling-bling culture prevailed due to the abundance of natural minerals and wealth…” Face2Face, Elizabeth Ofosuah Johnson.

According to Google search on the purpose of art, “Art influences society by changing opinions, instilling values and translating experiences across space and time. …(it) is communication; (allowing) people from different cultures and different times to communicate…via images, sounds and stories. Art is often a vehicle for social change.” And as to the question, is art luxury, Google answer, “No. The arts aren’t a luxury. Calling them a luxury merely means you deny the human needs of the poor and those clinging to the lower rungs of the social ladder.” Woah! Then there is the Guardian’s Charolotte Higgins whose treatise on Frieze, London’s major art fair featuring Ethiopian art over the past couple of years by the way, states, “It is a fantasy world, a parallel universe. Inside: the jetset, hedge funders, oligarchs’ offspring, the industrialists-some no doubt crooks, some chancers and some “serious collectors” spending months and years acquiring knowledge as well as art and whom the art world reveres. Outside: normality; mothers wondering how to feed their kids, the bedroom tax, child poverty, youth unemployment and housing prices.” Hmmm, read it all at the Guardian.
Then there is fashion with shamma inspired “luxury clothing” by Lemlem, Ethiopian model Liya Kebede’s brand. According to Vogue Business, “…resortwear line Lemlem employ many African craftspeople, their supply chains are global and reflect the reach of the African diaspora.” Decent read with nice photos including a happy group of Ethiopian women surrounded by beautiful baskets filled with white fluffy cotton and completed shammas, twisting final touches on some would say, traditional wear found from the streets of Addis to the ancient roads of Axum… now in top department stores from New York to Paris. Read it for yourself at voguebusiness.
Also worth mentioning is Addis Abeba’s St. George Art Gallery’s high end custom yet traditional craft of which French fashion designer, Count Hubert James Marcel Taffin de Givenchy, founder of the House of Givenchy said, “Luxury is in each detail.” Finally, let’s not forget about Bling, a Jamaican coined term for flashy jewelry, heavy enough to make a ‘blinging’ noise, made famous by hip-hop massive, Lil Wayne in the late 1990’s. Face2face Elizabeth Ofosuah Johnson writes, “Huge jewellery pieces made of pure gold and other expensive stones were worn or carried in the form of chains, grills and crowns. Due to their social impact, the culture soon spread across the globe especially among Africans all over the world. This culture has been practised by Africans since the beginning of time and was very prevalent in Ancient Africa. From royals to the everyday people, the bling-bling culture prevailed due to the abundance of natural minerals and wealth in the kingdoms. Royals were adorned with heavy ornaments in Ancient Egypt and West Africa…so heavy that servants stood close to kings and their family to help them raise their hands when they needed to speak…the display was part of the culture and custom that royals had to comply. The homes… temples and palaces found in Ancient Egypt, Sudan, Benin and the Ghana Empire, walls were made of gold and painted in glittering gold to signify that their kingdoms were wealthy. Homes of every day were no exception, and wealthy families showed off their wealth with gold or gold-plated utensils as well.” Much like our mothers of Tigray and Harar? Nice read on face2faceafrica.
So what’s my musing really about this week? It’s about the reconciling the knee jerk reaction to a painful past where the communist Derg regime banned the importation of paints and brushes, considering them “luxury items” for the bourgeoisie. It’s about provoking constructive discussion between those resistant if not repelled by the association of Ethiopian fine art and luxury, as if culture and luxury cannot or should not co-exist as it did in Africa for millennia, as mentioned above. It’s about self-determination and not always adopting Western perspectives including the “starving artist” narrative. To sum it up, I for one like the significance of African fine art as luxury, defined by us and for us and for all to see. After all we’ll buy a Benz, a Michael Koors bags, and Gucci earrings as status of success. Why can’t we consider collection of fine art from the best of Ethiopian artists displayed in the plethora of new homes and office buildings for all to see, even our cousins coming in from the country side asking mendinoh as we proudly explain? Combining culture and luxury grows the industry for African art appraisers, insurers, asset managers, institutional collectors and more. Galleries would be given space to grow, giving voice to voiceless, going beyond our usual complaints and cries for change in the fledgling art industry. Most of all, this re-classification would help transform a society through the wealth of art, accessible to all with no shame about making money along the way, as we grow our economy while stretching the limits of our mind. Let’s not wait till its too late and we are told we can’t define or do with our fine art, our precious resource, as we like, much like the conundrum over our water. Imjussayin…

VALUING REMITTANCES AND RESOURCES FOR AFRICA 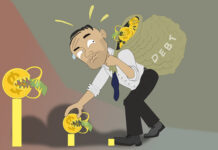 Signs You Don’t Make Enough Money and Overcoming the Problem