The past few weeks I have had to deal with some minor medical challenges. Stubborn as I am, I brushed them aside and delayed seeking medical advice, until symptoms became stronger and could no longer be ignored. I can deal with it, it will go by, it is not that serious, were some of my justifications to delay action. Denial and defence are natural human responses. When somebody brings bad news, a common reaction is: “It can’t be true.” Or, “I don’t believe it.” Likewise, when somebody points out a mistake we have made, we often explain our action away: “It is because I didn’t have enough time.” or “Management did not provide enough resources.” There is always something or somebody else to blame, rather than accepting the feed back and taking responsibility for our own deeds. Did you ever plan to travel, and something began interfering with your plans? If you really wanted to go you probably tried to ignore the interfering factors, like: “Somebody ill? Probably just a common cold.” “A red warning light showing up at the dashboard? Probably nothing serious.” The point is however, that by ignoring feed back or signals, we fail to make corrections, keep on making the same mistakes and allow things to get even worse.
Some time ago, I watched a television programme about an airplane emergency, which was the result of the pilot ignoring warning signals from the aircraft’s computer. He couldn’t believe the warning that was coming through, blamed it on a computer fault, ignored the signal and flew on as if all was normal. He continued to ignore repeat warnings and as a result all fuel was lost through a leakage and in the end, he had to make an emergency landing without any engine power left. Had he taken the early warning signals serious, much trouble later on could have been prevented. In facts pilots are trained to do just that: taking appropriate action upon signals from their instruments. Ignoring signals like described here result into spiralling down into the incident trap. Pilots know that and many other professionals have learnt this as well. One problem ignored at the early stages leads to more serious problems later on, which are becoming more difficult and complex to solve.
Now, what has all this to do with “Doing business in Ethiopia”? I have noticed that people here find it very difficult to accept feed back and this applies to employees as well. Feed-back is interpreted as criticism, while unjustified pride prevents people to look deeper into their own competencies and motives. I have also noticed that early signs, showing that something is wrong, are often ignored indeed. The matter is left till later or overnight, hoping that somehow the problem will have solved itself somehow. Trying to hide the first mistake is another strategy, but soon the accumulating problems cannot be hidden anymore. Not having the first bricks level, will lead to an uneven wall of the building. What to do? Continue and try to fill the gaping spaces at the end? Or look, stop; break it down and start over again, now building a straight and more stable wall? How about failing to insert a recurrent budget line in an accounting system? What to do? Enter the amounts under different headings, confusing the system and hiding information? Or, stop, redesign the system and do it right from start again? The answers seem obvious, but reality shows us that many people opt for the ostrich strategy, hiding their head in the sand, ignoring the obvious facts and going down the incident spiral. Why is this so? As I mentioned earlier, it seems natural to humans to deny bad news but there are some other factors involved here as well. In the first place there is education & training and learning on the job from the way others are doing it. It is important that sufficient attention is paid in any training about what to do when things go wrong and how to prevent things from going wrong in the first place. So, what can we do to improve the work attitude and be more proactive in preventing problems in production? Here are a few suggestions:
Make a conscious decision to want to deliver the best you can; to do things right.
Learn to step back frequently and look at the results so far. Is it straight? Is it in line? Is the shape right? Are the colours rights? Is this according to the specifications?
Ask for and accept feed back.
Make the diagnosis. What is really wrong here? What early warning signals do you get? Interpret them.
Deal with the issue. Make the necessary corrections immediately.
I know managers have a very difficult time trying to develop such an attitude amongst their workers and here follow a few suggestions for them as well:
Take heart and don’t give up; you are not alone.
Be consistent in giving feed back to your employees.
Set the standard; don’t accept what is not right; neither will your clients.
Keep training and coaching your staff. They have to get it right and if they don’t maybe they have to find another workplace.
Remember the principle: When you are confronted with an issue, deal with it there and then. Failing to do so will revisit you in a crisis later on in the production process, losing resources, time and clients. And that is not what you want, is it?
Deal with it – Happy New Year! 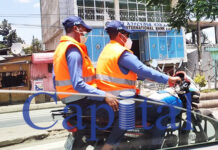