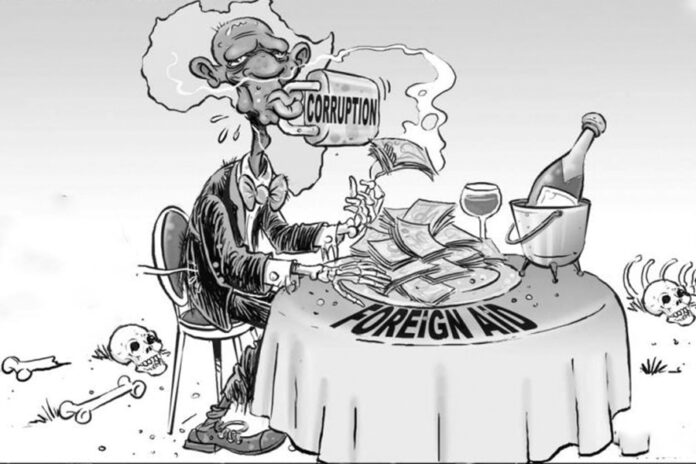 The African population continues to eke out a living on the ground. On the other hand, the states, seemingly oblivious to the sheeples predicament are pursuing policies that are formally and informally prescribed by the global dominant interests via the institutions of economic governance, education, as well as others. Adhering to the diktat of the ‘masters’ has not been very encouraging, media/state rhetoric aside. Polarization which breeds instability is in the ascendance and the so-called gains that were registered in recent years were mostly due to higher commodity prices as well as low interest on loans/debts obtained from China and the West, compliment of massive money printing. Conditions are now reversing and the flow of money from the South is accelerating. As the US dollar becomes dear and interest rates on US dollar denominated loans rise, servicing (let alone paying back) the fast accumulated debts will become difficult. In fact, the situation increasingly looks like the old 1980s third world debt crisis!
In the context of Africa, the whole scenario has created a discernible disconnect between the states and their increasingly restive beasts. What is even disturbing is; the attempt to resolve the various disconnects might entail yet another round of generalized violence. Unlike before, however, (when Africa’s population fought European colonialism in unison) the ascending violence that is being waged against the various prevailing grievances seems to be fragmented, disorganized, even unprincipled. Nonetheless, the violence is real and will continue to destabilize the fragile continent. A number of the major African states are clearly dithering while the sheeples (in these countries) find themselves on the precipice. Unfortunately the top four of the most populous states have one thing in common. They are becoming visibly unstable!
However, to sustain the prevailing relative peace & stability, concerted efforts must be exerted by all and sundry to weed out the sources of systemic instabilities. Injustice (in all its manifestations–nepotism, corruption, mal-governance, mal-investments, etc.), which pervades our collective existence, must be seriously assuaged, if not purged all together from the society at large. Don’t forget, unlike many of the African countries, Ethiopia has undergone a wrenching revolution that did away with most of the built-in imbalances/injustices that used to structurally/institutionally impede the general development of the sheeple. In spite of the current superficial affluence that is affected by the connected oligarchy and its decadent culture, the beast still remains rather decent and God fearing in all its major undertakings/vocations, hence, might one day take matters on its own hands and pounce on the whole charade/nonsense. From now on mere palliatives and cosmetic changes might not do, as resentments have against such dispensations have visibly deepened. Let’s hope our forewarning has not been all to no avail!
The above majors, with due respect to their struggle against colonialism, were not allowed to seriously tackle their own shortcomings in their own ways. As a result of (mostly) outside protracted machinations these countries succumbed to fragility and instability. Developing a decent and resilient society based on democracy and equity will inevitably demands all sorts of sacrifices. Entrenched interests and their institutions that also double up as creators of culture (Hollywood, education, sports, entertainments, etc.), find the above African virtues anathema to their narrow objectives. The current lopsided globalization is not helping the African mass to deal with its various problems creatively. In today’s world, the organic and supportive traditional African values/culture that could have served as basis for collective cooperative existence, have given way to bona fide narcissism that certainly will not deliver us from the prevailing and highly articulated polarizing globalization!
DRC was made to move from committed nationalist leadership (Lumumba, et al) to that of degenerate compradors (Mobutu, et la.) in no time! It seems DRC is too big and too rich to be left alone! The descent in Nigeria was more gradual. Nevertheless, this country of frantic activities and dynamic sheeple spirit ended up being the reincarnation of neoliberalism in its raw animalistic essence. Money is now celebrated (by the large majority) as if it is the only “God’, here and in the hereafter! The famously un-bashful thieving elites of Nigeria are probably the most powerful agents in inculcating the whole dehumanization project that subtly (and not always indirectly) pushed by the global power that be. The assumption of the dominant interests is that; once such craziness is sufficiently instituted in a society, the rest of the restlessness of the sheeple can be handled rather easily. No wonder the opposition in the north is having easy headways. Frankly speaking, the likes of ‘Boko Haram’ don’t have much convincing to do, given the reality of the poor on the ground. Just wave the ‘holy book’ and pronto, there will plenty of young people ready and eager to become martyrs for ‘the cause’, whether the alleged divine cause is imposed or internalized! Given the protracted mess Nigeria finds itself in, the analysis and responses of the elites, not only within the political class, is at best disappointing! War of resistance against accumulated grievances will not go away, just because the status quo desires it. We believe a more reflective and mature approach to the ongoing crisis is preferred to the rushed violent reaction that might not secure the future to the whole collective!
Going forward, we believe, the ideology light insurrection of the recent past should remain pertinently instructive. Whichever way we look at it, Africa will still be in need of principled revolutions that favor the sheeple. Whether such revolution will be bloodier than what obtains today, depends mostly on the maturity and wisdom of the generation that is willing to wage it!