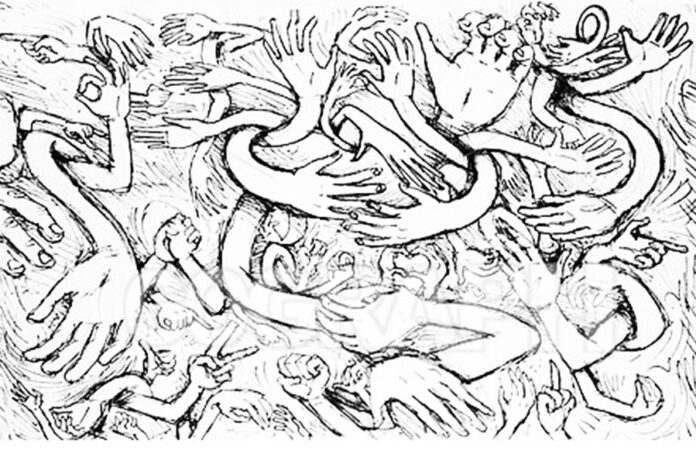 As the modern world system unwinds, chaos is visibly in the ascendance. To those aware of the lopsided (inequity) nature of the world system, (@1500 AD-onward) recent anti-systemic developments cannot be altogether unexpected. Expectedly, those who have been immensely benefitting from the global regime are increasingly concocting schemes to retain their (mostly) undeserved privileges. Continuous wars are amongst the overall contemplated schema. Unlike before however, many of the wars the psychopaths/sociopaths’ want to wage, will not be easily winnable. Observe the situation in MENA (Middle East & North Africa) and Afghanistan. At the same time and characteristically, the gullible sheeple (human mass) is, by and large, at a loss as to the real reasons for the various wars!
The polarizing economic regime of the world system is undergoing acute distress, not only in the core countries of the West, but also in the peripheries and semi-peripheries. For instance, in South Africa, a member of the BRICS (Brazil, Russia, India, China and SA) major rumbling is in the offing. The South African sheeple is demanding an equitable share of the country’s wealth, as in the distribution of land. Despite provisions agreed upon at the time of liberation, (from apartheid) the sheeple is forcing the compromised political leadership of ANC to raise the issue of land afresh. This certainly doesn’t spell peace in ‘Rainbow La La Land’, at least in the coming few years! The Namibian sheeple is also eager to review the issue of land. One should recall the political arrangement on the eve of independence in that neighborhood! Mozambique has now succumbed to another round of debt slavery, so to speak, a mere two decades after it was relieved of its massive debts, odious as they were. The situation is more or less the same in many of the so-called ‘emerging countries’ of Africa. Beware; debt is mostly a weapon of control and not always a tool of economic progress! Here is how one analyst put it: ‘Globalization is all about world control. It is about getting the nations addicted and dependent on fiat currency and then managing them for the benefit of the looters.’
South Americans’ suffering is leaving them without much energy to instigate debates on the fundamental reorganization of theirs’ structurally ‘dependent economies.’ Brazil is witnessing its most severe depression in its modern history! The attempt (by the current politicos in power) to bring back the traditional regime of social polarization and economic stagnation a la old-style compradorial servitude might not work this time around. The whole ‘Africa Rising’ meme also belongs to this stupid charade. Luckily, it is being challenged by the growing militancy of the sheeple, eager to redress parasitic economic and social orders. Anticorruption movements in Nigeria are becoming more virile. In the wider East African region, anti-establishment activities are gaining ground, despite the numbing rhetoric of the status quo at the service of dominant/oppressive capital. Even in the relatively progressive developmentalist state of Ethiopia, its unripe ethnic federalism notwithstanding, the sheeple is flexing its muscle, intent on throwing out degenerate political goons and affiliated oligarchs (foreign & domestic, big & small) who have been taking unfair advantages of its decency for far too long!
Last week the Chinese state/leadership made the decision to look at its complex economy more soberly and realistically. Accumulating debt with the objective of growing the economy non-stop, as if there is no tomorrow, will bring stagflation and more, the day after tomorrow (even if most of the debt is domestic, like Japan.) Prudence and resilience, both in economic development and social progress need an atmosphere of predictability, transparency and most importantly, integrity, in other words-the rule of law! The decision to slow down the current rate of growth in China should be commended, as resources are/were being wasted royally, for the sake of maintaining unrealistic growth rate that might not bring much to human happiness, at leas at this level of economic development. It should also be noted that in the long run, newly minted parasites/cronies exclusively benefitting from state largess would only undermine collective harmonious existence, even in places like China!
Admitted or not, the Western world is also in secular decline, mostly as a result of unsustainable debt, parasitism (cronyism), militarism (overreach), overconsumption, complacency, etc, etc. The dominant global system has no clue about the core essentials that can potentially foster general peace & wellbeing amongst diverse humanity, outside of the absurd, narrow and untenable idea of infinite growth, on a finite planet! Consequently (and amongst other things), the system cannot bring its stupid self to accept the benefits of depopulation. The system is finding it difficult dealing with the welcomed trend in global demography, because it negatively impacts the economies of the core countries as well as the semi-peripheries (China, etc.) So far, the system’s panacea for all and sundry has been the massive creation of debts (to increase unnecessary consumption to compensate for declining income and population), but debts (only pull future consumption forward) take away, not only opportunities, but also rights of the unborn future generations. The humongous debts being created all over the global system will hardly be payable and therein lies the source of major conflicts in the years to come! Two centuries later, the following pertinent observation still applies to each and every country of our planet!
“If the American People ever allow the banks to control the issuance of their currency, first by inflation and then by deflation, the banks and corporations that will grow up around them will deprive the people of all property until their children wake up homeless on the continent their fathers occupied. The issuing power of money should be taken from the bankers and restored to Congress and the people to whom it belongs. I sincerely believe the banking institutions having the issuing power of money are more dangerous to liberty than standing armies.” (On the dominion of banks – letter to James Monroe, January 1, 1815) Thomas Jefferson. Good Day!

Africa Arise NOW is the Time!

BEING AND BECOMING: ART AND HUMANITY