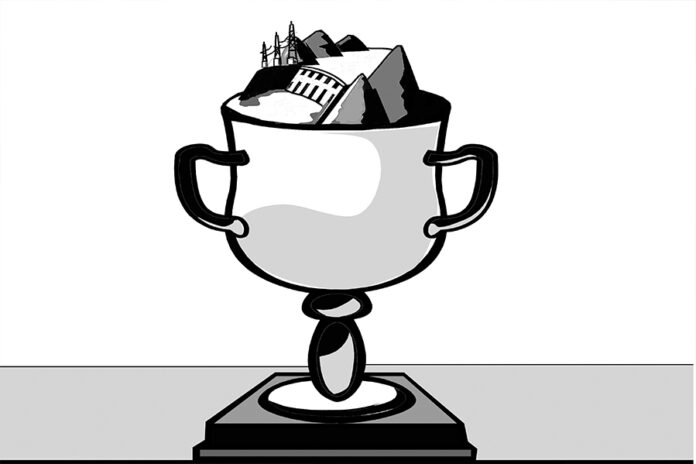 The last widespread financial crisis was a decade ago. To be sure, such cyclical crises are the built-in features of the prevailing world system. Be that as it may, the global status quo never really cared about devising a relatively more stable monetary order to help alleviate such recurrent crisis. Instead, every time there is a crisis, entrenched interests, with the help of their paid politicos, pumped money, (phony money that is) into the system as if there is no tomorrow. But tomorrow has now arrived! The excess liquidity pumped into the system (after the 2008 crisis) is going to bring havoc, perhaps with vengeance! In this regard, the newcomer to the system, China, went overboard in its enthusiasm and allowed the massive creation of credit, with a view to bring about stability and continuous growth to the global system!
The humongous credit China crafted to thwart off full-blown global depression is truly without precedence. The trillions that were thus created by the Chinese state, predictably, resulted in massive mal-investment, both locally and abroad. Domestically, the excess credit manifested itself as unnecessary infrastructure, including ghost cities, brand new idle factories, etc., etc. Internationally, it created plenty of cheap consumables and asset bubbles, real estate, etc. As a result, the world is much more in debt today at @ $250 trillion than in 2008 (@ $170 trillion). In 2018, the world is facing similar predicament, but in a highly viral form! Amongst the consequences of easy or unearned money, one can mention wasteful activities/enterprises that continue to abuse non-renewable natural resources. Socially, easy money promotes visible decadence. The banking system creates phony money and unfairly rewards those in close proximity to the money spigot, while the working stiff is left with only crumbs, dispensed by the moneyed as compensation to exerted labor power! By and large, it is not those who actually work, create, etc., that are rewarded by the current system, but rather, it is those who manipulate the system mostly via finance. In late modernity or crony capitalism, it is ‘financialization’ that runs the world!
In the world of unearned money/excessive credit, zombie companies tend to dominate economic activities (Minsky, et al). Sure enough, today, from listed corporations that live by hype, not earnings, (like Tesla etc.) to so-called national champions that leverage the state, to small-scale operators created and encouraged by the various political orders; all belong to the make believe world of ‘Alice in Wonderland”. It seems the world is now facing a generalized ‘Minsky Moment’. The systemically built parasitic economic order operating globally, doesn’t take the global sheeple (human mass) into serious consideration. Obviously, the sheeple is not allowed to have any real say about the workings of the economic system. Even some of the very destructive operations that have become detrimental to life, are not to be questioned by labor/sheeple; as doing so would negatively impact its precarious position. Blinded by greed, oligarchs and politicos are destroying the existing system from within. The so-called emerging markets are also repeating mistakes that have been widely and thoroughly known to be duds. Politicos in emerging markets allowed their cronies/oligarchs to over indulge in debt, mostly accrued from abroad. Both knew beforehand, when the time comes to honor the various commitments they will all be safely gone!
If truth be told, financial crisis are mere symptoms of underlying economic distortions/imbalances. Fractional Reserve Banking (FRB) is what allows banks to create money out of thin air. Without a doubt, FRB is the greatest non-violent crime of the millennium. When the global economy is based on this massive fraud, outcomes cannot be all the way satisfying, to say the least. It is such nonsense that allows the perpetuation of the stupid idea of infinite growth on a finite planet! The global economic system we are all forced to live under is irrational, pure and simple! Its logic is oriented towards the temporal and unsustainable. It gives priority to the frivolous while undermining the irreplaceable, like natural resources. Ecosystem destruction doesn’t bother the prevailing economic system. It is a very dangerous concoction systemically insulated from serious interrogation, enabled by human vice, namely greed. But there will be a price to pay, a dear one at that!