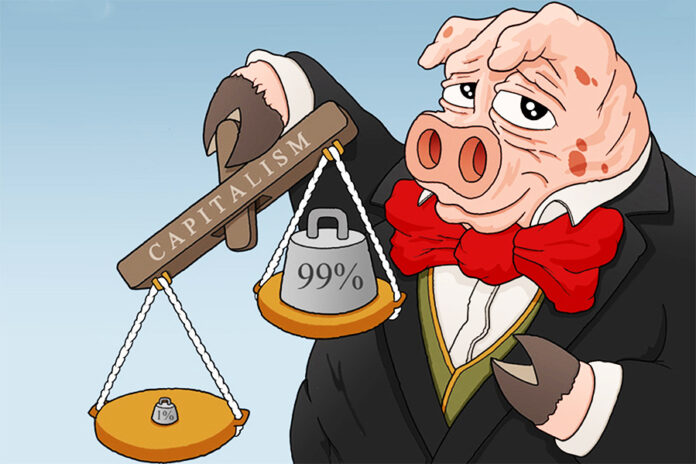 Whether we like it or not, it is crony capitalism that has won the day in our modern world system. If truth be told, there is no place on earth where crony capitalism is not the main operating mode of accumulation. Rhetoric aside, the institutions of economic governance directly and indirectly encourage the entrenchment of crony capitalism across the board. From Ethiopia to Estonia from USA to Uganda, crony capitalism is now the actual face of the dominant global system. But there are plenty of problems associated with crony capitalism. The main problem being; unlike old-fashioned capitalism, crony capitalism alienates more than it empowers. As a result, it instigates insurrections, both creeping and abrupt, all over our planet!
In many countries oligarchs cannot exist without their supporting politicos. This also applies to our continent. The propaganda of the global ruling elites, which insinuates the possibility of creating genuine wealth outside of generalized corruption, is, by and large, a farce. Here is how the game is played. The crooked politicos need faux front companies to steal the country’s resources. Some of these stolen resources are recycled to facilitate elections, including vote riggings. Every time there is an election in an African country, the banks invariably become overstretched, as these institutions will be instructed to extend plenty of credit to the connected oligarchs. The money is then used to buying votes. A couple of millions of birr to a strong candidate can be quite convincing to force withdrawal. Frankly speaking, a billion birr can do electoral miracles! Vote rigging has become common and elections have been rendered mere rituals necessary to usurp power. Like anywhere else, the project of winning election, by hook or a crook, is the driving force of Africa’s psychopathic politicos.
Once the incumbents are reelected, plenty of money will again be directed to the old cronies, via tenders, government procurement, tailor made projects, etc., etc.! Rinse and repeat!
Elections are influenced by the preponderance of the ‘deep state’ in the core countries and the ‘Mafiosi State’ in the peripheries. Winning election outside the desires of the deep state/Mafiosi state is not easy. Nonetheless, upsets can and will happen when things become absurdly offensive. When such a point is reached, the sheeple will cast its massive ‘protest vote’. In the process outsiders can usurp power. Recall that we have defined the deep state as the military-intelligence-industrial-banking-media-complex. Invariably, the deep states of the powerful states would like to see submissive governments in the weak states of the nation-states system. To this end, everything will be done, including election rigging. Showing signs of stubborn independence, on the part of the weak, might well bring havoc to their existence. In the long run, these countries almost always face internal difficulties that can easily unwind coherence and expose them to fragility.
Crony capitalism creates money out of thin air. In crony capitalism the old fairytale of ‘from rags to riches’ through hard work is conclusively proven to be just that; fairytale. Most of the money in global circulation is created by commercial banks. This phony/unearned money is systemically channeled to those loyal to the system, i.e., aspiring oligarchs and their political handlers behind the veil of capitalism. The creation of phony money always creates inflation and inflation disproportionately affects the working poor. The convertibility of countries’ currencies into gold, via the US dollar was abandoned in 1971. Since then countries print their own money as if there is no tomorrow, until they can’t! The case of many, before it demonstrate this brutal reality of printing money with abundance. Those that depend on constant supply of bank money are not affected by inflation. It is only those who are forced to earn their keeps by selling their labor, mental or physical, that suffer the consequences of inflation. This is the main reason why crony capitalism supports vacuous electioneering!
Resistance to crony capitalism, by extension electioneering, is growing by the day. The main stream media, as part and parcel of the deep state, doesn’t want to cover the weekly protests in their country. On the other hand, the Hong Kong demonstrations are always on the news. Any perceptive reader can easily pinpoint which protests are favored by the deep state and which are not.
In places like ours opposition to crony capitalism can take a very undesirable turn! Crony capitalism and useless elections go hand in hand, one cannot exist without the other. The two are always in a symbiotic relation. This relation is one of the main defining characteristics of late modernity.