The current state of thought amongst the powerful in regards to the ‘third world’, particularly Africa, is not what many a gullible sheeple (human mass) in the third world thinks. The commentary next column, written by one Jayant Bhandari, is illustrative of this overriding sentiment behind establishment dogma. Nevertheless, the writer, alias or not, has brought to light the efforts of global dominant interests to reestablish another dismissive narrative to undermine the rest of us! We certainly do not want to critique this or other commentaries; as this is not the forum for doing so. Suffice is to say, this game of ‘blaming the victim’ has been around for decades and its recent revival says a lot about impending scenarios. On our part, the main purpose of printing such simplistic view is to show readers how the global establishment and affiliates are willing to create denigrating narratives, with a view to further their objectives, amongst which, the perpetuation of polarizing globalization is paramount!

It is this column’s established trait to be swift and bold when it comes to criticizing the ever-present generalized degeneracy that overwhelms the ‘third world’. Therefore, it is only fair for us to side with the writer in espousing the values enumerated in the article, without condoning the underlining reasons. ‘…thrift, honesty, hard work, liberty, individuality, dispassionate reason, objective justice, loyalty, honor, stoicism, a desire to rise above oneself…’ are not values to argue against. In fact, we do not know any harmonious human collective in history that didn’t, at least formally, upheld these values. Harmonious societies evolved (throughout the ages), primarily by leveraging these and other principles. Why then are we failing to maintain them in a ‘typical third world’ country within the context of overbearing modernity? Does the overarching world system genuinely want empowered sheeple (human mass) to rise up and demand a higher level of emancipation, not only from needs, but also from the globally sanctioned wanton greed? As polarization is one of the features of the world system, do entrenched interests really want to eradicate the tools that have helped them secure their current status? In this regard, it is wise to note that the human vices of racism, ethnicism, sexism, remain the main pillars of the existing lopsided order. Does the system also want critical sheeple to interrogate the system’s callous attitude towards nature?

At the end of the day, the above values cannot exist or be realized in a vacuum, they need to be practiced in actually existing societies. When even basic conditions are not fulfilled in many third world countries, it might be ‘rich’ to extrapolate values that obtain only in well to do societies. The current western ideology doesn’t promote an enlightening human culture that is not going to be subservient to crass consumerism. To this end, Empire subjugates the third world into the dehumanizing ideology of incessant accumulation. Those who try to resist this abomination are being dealt with, mercilessly. Psychopathic gangsters, fully enslaved by greed of one kind or another, are the muscles employed to set up gangsterism across third world societies. The above listed values can only come about as a result of well functioning human societies, not in mambo jumbo collectives where humanity is only a mere cog in the wheel, as it were, only to serve capital’s insatiable craving for continuous accumulation by destruction. If truth be told, empire needs vagabonds as heads of these third world countries. Where are the democracies and attendant values (as enumerated above), forged by the alleged liberators? Is it in Iraq, Libya, Syria, Venezuela, Ukraine, etc.? We admit; third world degeneration is a fact of life, but it is not only caused by the incapacity of indigenous cultures to deal with dehumanizing modernity, challenging as it is. For a large part, it has to do with the interference of global powers in the affairs of the third world!

At this late stage of consumerism, societal degeneration is a built-in phenomenon; it comes with the territory, so to speak. The intended design of this techno led modernity is to obliterate, not only the values listed above, but also other traditional ones in organic cultures, to say nothing about its destruction of the natural world. After all, without crushing indigenous organic cultures, capital cannot have ‘smooth sailing’. Think Iran, Russia, Burma, Cuba, Yugoslavia, traditional Ethiopia, and contrast these countries, for example, with the emerging vassals of Eastern Europe, those still considered western by the writer, at least up to now! Even in the west, societal malaise is now in the ascendance. Yes, we fully agree on the need to have value-based societies, but when we are systemically indoctrinated to be absolute idiots, what is demanded is the complete overhauling of our enslaved mentality/societies. Dealing with all sorts stooges placed in power by the Deep State is not solely Africa’s or third world problems, it also prevails in the major countries of the rich. Since the 9/11 and 2008 financial crisis, democracy has been thrown out and is replaced by manipulative/callous placement. Italy, France, etc. are cases in point.

At the rate of degeneration the countries of the west are undergoing, it won’t be long before many are also classified as third world. Many of our Africans buffoons that pass as leaders, are, by and large, nothing more than thugs in suits, compliment of the empire. No third world society is left alone to sort out its problems, without the massive negative interference of the west. Third world countries are not allowed to have quality leadership, per force! Every time someone (or some indigenous institution) emerges that promises to be capable of implementing transformational initiatives, he/she will be pushed out, accidented, suicided, homocided, sickened, etc. Africa’s history is full of such tragedies: Lumumba, Sankara, Garang, Nkrumah, Gadhafi and many, many, others, not well known to the sheeple. Don’t be fooled; ‘Blaming the victim’, is one of the old strategies of global entrenched interests. It is used to thwart off challenging narratives emanating from the peripheries. See Kolbert’s article on genetics on page 28.

All in all, the existing order is a very sick global arrangement that should be replaced by a less destructive and humane model of existence. To a large extent, the article next column is a precursor of coming narratives that will be established/employed to dehumanize the third world, with an intention to implement measures that is way beyond the norm. Here is the real truth about the hidden power or deep state that is inhumanely shaping global societies, by no less an authority than the president of the USA himself. “Some of the biggest men in the United States, in the field of commerce and manufacture, are afraid of somebody, are afraid of something. They know that there is a power somewhere so organized, so subtle, so watchful, so interlocked, so complete, so pervasive that they had better not speak above their breath when they speak in condemnation of it.” Woodrow Wilson. Good day! 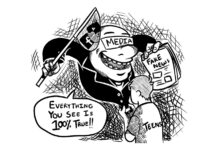 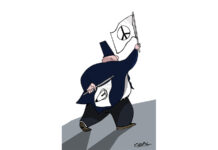 World athletics legend Haile says ‘together we will beat corona’ 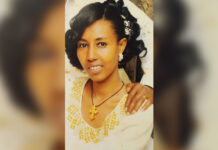