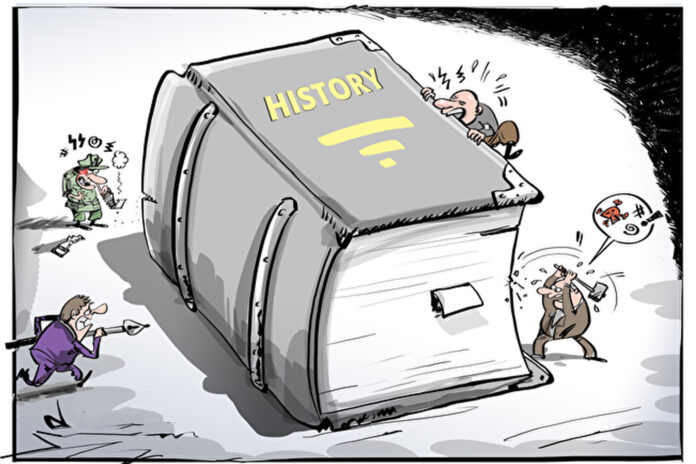 The modern world system is exhibiting symptoms that are heralding its final demise or bifurcation. Like previous exploitative regimes, the current empire, (i.e., the reigning hegemon and its subsidiaries) is engaged in a battle it might not win this time around, unless its members are willing to change their ways, comprehensively! What we learn from history is that all empires ultimately collapse, without exception! Overstretched military, debt infested manipulative economy, which fosters grand political, cultural, etc., corruption; lack of capable leadership in all sphere of existence, bureaucratic failure to decipher the foundational from the ephemeral, etc., etc. are all the usual telltale signs of a collapsing empire. Our concern today is to single out an element that prominently and repeatedly features within empire’s generalized decay. It involves the untenable project of rewriting history, usually with vacuous gusto!
Whether one likes it or not, one has to accept the simple fact that one cannot redo history! What one might attempt is misrepresent the past so that the intended distortion will serve the objective of the day. The steering core of the current empire, consisting of the Anglo countries (USA, UK, Canada, Australia and New Zealand) or the ‘five eyes’ for short, are currently and vigorously attempting to misrepresent facts on so many different levels. To this end, they have set up a well coordinated cyber command manned by numerous human cretins as well as sophisticated algorithms. We will only cite one example. The open source web encyclopedia that goes by the name Wikipedia is now fully penetrated by these fact/truth manipulators or liars! At this point in time, not many entries on Wikipedia can be believed or taken for granted. Wikipedia might still be useful if one is looking for such innocuous things as the capital city of Germany; other than that, everything else must be taken with a grain of salt, to say the least. This once credible website, which was the result of many genuine individuals, is now taken over by the psychopathic deep state!
Another effort to rewrite history involves WWII. To be sure, this attempt at total misrepresentation goes back decades, to the last days of the war. The DS (deep state) has done a tremendous job in falsifying the history of WWII. Leveraging all its components, DS has managed to instill a distorted version of WWII amongst the global sheeple (human mass). In fact, our world has been victimized by the Hollywood-esque bamboozle that continuously tries to depict the Germans and the Russians as the ultimate evils, not only during the war days! Recall our heuristic definition of the deep state as the military-intelligence-industrial-banking-media-complex. In this definition, the media is intended to incorporate all the entertaining media; movies, spectator sports, etc., as they are part and parcel of the DS’s indoctrinating/brainwashing tools! One has to be quite clear about the ultimate objective of the DS. It is to control, with a view to dominate all global life. Such individuals are classified as psychopaths. Scientific data verifies that only about 5% of the world population is bona fide psychopaths. This gives some hope; on the other hand and unfortunately, these psychopaths tend to disproportionately dominate politics, banking/transnational corporations, the intelligence agencies, the military, etc. If global humanity wants a better world, these characters must be barred from all positions that entail collective societal responsibilities, directly/indirectly; otherwise civilized humanity might not survive their inborn wickedness!
Humanity must discard the multifaceted manipulation/distortion of global entrenched interests. In this regard, learning the true story of WWII or even WWI is of paramount importance. In WWII, amongst the Allies, it was the USSR that paid the most sacrifice, both in terms of lost lives as well as resources. The Chinese had also lost millions of people in the Asian war theatre. These are indisputable facts, however much the DS wants to distort history. The prevailing narrative of ‘evil Russia’ or ‘evil China’, as orchestrated by DS, must be tackled with facts and truths! On our part, we hail all those who made the ultimate sacrifice to defeat Nazism!
‘History knows no greater display of courage than that shown by the people of Soviet Russia.’ Henry L. Stimson, US Secretary of Defense.
‘We and our allies owe and acknowledge an everlasting debt of gratitude to the armies and people of the Soviet Union.’ Frank Knox, US Secretary of the Navy.
The gallantry and aggressive fighting spirit of the Russian soldiers command the American army’s admiration. George C. Marshall, Chief of Staff, US Army.
‘I join … in admiration for the Soviet Union’s heroic and historic defense.’ Ernest J. King, Commander in Chief, US Fleet.
‘…the SCALE AND GRANDEUR of the (Russian) effort marks it as the GREATEST MILITARY ACHIEVEMENT IN ALL HISTORY.’ General Douglass MacArthur, US Commander in Chief, Southwest Pacific Area [emphases original].
“The world has never seen greater devotion, determination, and self-sacrifice than have been displayed by the Russian people and their armies…. With a nation which in saving itself is thereby helping to save all the world from the Nazi menace, this country of ours should always be glad to be a good neighbor and a sincere friend in the world of the future.” US President Franklin Delano Roosevelt, July 1943.
Now contrast the above honest portrayal of history with the current simplistic jingoism, as twitted from the Whitehouse on the 75th anniversary of WWII. “On May 8, 1945, America and Great Britain had victory over the Nazis! America’s spirit will always win. In the end, that’s what happens.” President Trump. Good Day!