Neoliberalism as imposed on the peripheries is more than a mere economic scheme facilitating inequitable integration to the world economic order. Neoliberalism is an ideology that fosters, directly/indirectly very destructive and unsustainable projects on a world scale. The continuous destruction of the planetary ecosystem is not a major consideration to this archaic dogma. There are various definitions of neoliberalism. See the articles next column, on page 42. To us, it is a system of global accumulation that desires to create a world of extremely few owners/managers (not more than few thousands) at the top of the pyramid and plenty of serfs or wage slaves down below. To this end, the system employs plenty of tools, including millions of functionaries, learned or otherwise, to support its lopsided globalization!
Here are interesting figures that might startle many a reader. There are about 190 people who manage with significant ownership, a global wealth of over 40 trillion USD. For comparison, the current global GDP is about eighty trillion USD in nominal terms. Corporations that number less than 100 conduct over half of global trade. Less than 1000 corporations account for over sixty percent of global industrial outputs! In the finance sector, the concentration is even more ominous. This extremely lopsided global economic reality is the result of the neoliberalism of the past forty years! The primary mission of neoliberalism is not efficiency as claimed, but the concentration of wealth in the hands of extremely few global operators. These entrenched interests also run, directly or indirectly, the global political show!
Most importantly, in less than half a century, neoliberalism has managed to destroy a good portion of the world’s natural habitats and its non-renewable resources. Neoliberalism’s economic doctrines are based on the flawed assumptions of infinite growth on a finite planet and a phony money system that favors, by and large, only the gullibly loyal and the criminally connected. During the last forty years, the system leveraged the following policy tools (implemented all over) to cement its grip on humanity and the planet; privatization, liberalization, deregulation and austerity. Today we will only look at the privatization scheme, which is one of the corner stones of the system. Privatization is a scheme that is determined to diminish collective ownership to allow private capital to take charge of management as well as ownership of large-scale state operations. The ideology of private capital doesn’t give much consideration to the interests/desires of the large majority of the world’s population or the natural environment!
Privatization, it is said, will always bring efficiency to the economic system. Results are not all that convincing. Kenyan Airways is now pleading for outright nationalization, by none other than the government of Kenya. As a private venture it is having difficulty securing finances to procure new aircrafts. So much for our dream of privatized airlines, privatized power, privatized water, privatized banks, etc. Many countries are reconsidering the whole privatization projects. Tanzania re-nationalized its water supply management in its entirety. A number of states are reconsidering many of the sectors that were once privatized. The privatization in Britain is even more bewildering, to say the least. What drives privatization? The notion of efficiency, it seems, was used mostly as a Trojan horse for mere grabbing by transnational capital. The real driving force was to find profitable investments to park the glut of capital, which is literally rotting in the core countries. Moreover, as the monetary system is based on phony/fictitious money, securing an investment somewhere and soon, before the whole farce comes tumbling down, became imperative to transnational capital. At the end of the day, the scheme of privatization is to anchor the lopsided globalization of late modernity!
Despite the overwhelming support by dominant interests and their lap/barking dogs, the neoliberal policies of the past forty years are under intense interrogation by the majority of global inhabitants. Only yesterday, one of the leaders of the ascending powers in the world system declared: ‘neoliberalism is obsolete’ (Vladimir Putin). The UK Labor party promises to re-nationalize many of the infrastructures that were privatized under previous regimes, including the major banks! These entities became more inefficient and expensive under private corporations. In addition, just like the case of Kenya Airways, many of them ended up requiring the continuous injection of capital from the state, in one form or another, defeating the very logic of privatization. During the financial crisis, almost all the banks in the west had to be bailed out with taxpayers’ money. Today, the banks are back at it again, engaged in their usual criminal manipulation (CDO=collateralized debt obligations, etc.). Here are some wise words from someone who insists on having ‘skin in the game’. Vacuous intellectuals please listen. “Experience is devoid of the cherry-picking that we find in theoretical studies.” Nassim Taleb. Good Day! 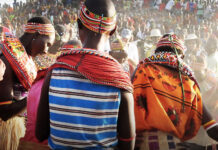 11 interesting things you should know about Africa

Lockdown in Sudan capital after third coronavirus death and 29 Infected

Is there an entrepreneurial “Life Pattern?”