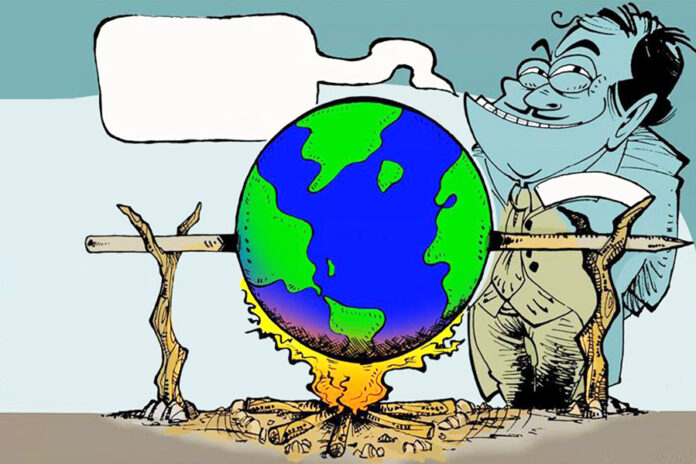 The ideology of the modern world system heavily rests on the tradition of liberal democracy (in the arena of political governance) and aspired ‘laissez faire’ capitalism (in the sphere of the economy.) To be sure, the worldly realization of both, in their pure ideological sense, was never a possibility, given how the human animal behaves in its collectivized settings. In the case of the former, for instance, it was social democracy, which (more or less) prevailed, particularly in the old countries of the West. By the same token, the principle of ‘free market’ economy became anything but! In the 1970s an invigorated admixture of the above two came into prominence and was promptly christened ‘neoliberalism.’ Presently this amalgam is undergoing functional and structural stress of immense proportions.
After the demise of the USSR, neoliberalism took center stage in the political economy of the world system. The vacuum created by the wholesale abandonment of various left tendencies (Marxists, et al), also availed ample space for neoliberalism to dominate a good portion of life all over. Two decades after the alleged triumph of neoliberalism, the tide has changed course and the project of unfettered capitalism is now on the ropes, so to speak! Whichever way one slices it, there are obvious shortcomings associated with the ideology of neoliberalism. We will explore developments that were accentuated by neoliberalism, starting with the core countries of the system. Amongst the main problems neoliberalism wrought to the western sheeple, political governance and polarization feature prominently.
In the Western arena of political governance, democracy seems to have been succeeded, rather effectively, by plutocracy. Democracy, as promoted by the political honchos of the plutocratic/oligarchic system seems to be, neither an ideal towards which human societies must strive, nor even an operational/methodological exigency required to keep the capitalist machine humming. In regard to the latter, we can mention the day-to-day operations of the ‘deep state’ of the core countries. Unlike before, it is now the powerful bureaucratic deep state that calls the shot. For instance, what the military-security-industrial-banking-media complex decides goes and there isn’t much the sheeple, nor its powerless institutions can do about it. Wars, surveillance, open lies via instruments of propaganda, etc., etc. are features that became pronounced after the ascendance of the current neoliberalism in the West!
In the lands of the entrenched plutocrats, the role of the good sheeple is reduced to a mere drone and an obedient one at that! So long as there is the usual bread and circus, the peace will be maintained, of course up to a point. In other words and putting it more bluntly, the sheeple is already on a fast track back to serfdom. In effect, plutocracy is a rule without legitimacy. Here we assume (may be naively) that it is only living humans that can legit representation, not dead ones, like capital. One should be reminded that capital is, after all dead labor! In places like the United States, it is not the sheeple that could elect and bestow authority on politicians, but rather money or the moneyed! For example, recent ruling by the US Supreme Court has emphatically asserted that not only corporations have legal personality, but can also elect their favored politicians, via money! Since politicos swarm where there is money, one cannot find easier bait! This is probably where the phrase ‘money talks bullshit walks’ came from. In short, grand political corruption has become an integral part of political governance.
The second horrific outcome of neoliberalism is its systemic and ongoing polarization, i.e., fostering inequality within a given society, to say nothing about polarization between countries! The visible pauperization of the sheeple in the advanced industrial nations is without precedence in recent history. One has to go back all the way to the beginning of the last century (Gilded age 1890-1920s) and the Depression (1930s) to find something that remotely resembles what obtains in the West today! Very few and highly connected western elites continue to make it big, not because they have come up with stuff/systems to better humanity’s fortune, but rather they have managed to concoct various laws/regulations to help them devise all sorts of schemes to effectively transfer wealth from the sheeple to themselves, compliment of prevailing plutocracy! These characters represent less than the .01% of the general population. The offshoot of all these is; the western sheeple is angry and has started to leverage its democratic prerogative, however curtailed, to address the root causes of the prevailing protracted problems, mostly by electing political parties that are bent on rejecting the basic tenets of neoliberalism.
We believe all these commotions are taking place because of the maladministration of global political economy by the spent ideology of neoliberalism. In summary: lack of deep democracy has created deep states, which are run by psychopathic types. Modern feudalism is the other creation of neoliberalism, where the very few and highly politicized operators amass the lion’s share of the wealth of a country while the sheeple toils for pittance.