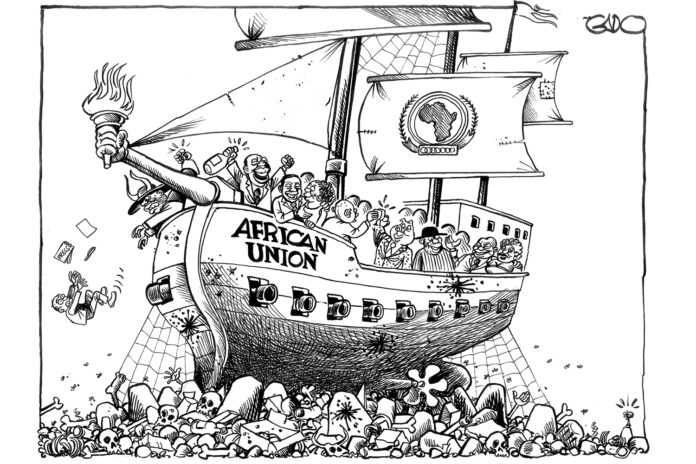 The African Union is a vision, a desire to bring about some kind of unity amongst the various African nation states. The original objective of Pan Africanism, as articulated by the founding fathers of post-colonial Africa, was sufficiently diluted to make room for less resolute trajectories advocated by some member states at the time of OAU’s formation. The OAU, whose sole compromised mission was ‘flag independence’, ended its task about a quarter of a century ago. Its subsequent replacement, the AU, was empowered to envision and seek continental unity. The AU is primarily driven by Africa’s polity leveraging the apparatuses of the nation states to achieve consolidation, much like the now troubled European Union!

To be sure, the AU, just like its counterpart in the North, doesn’t seem to care much about inputs from the African sheeple (human mass). In a world where ‘populism’ is fast accelerating, it would be wise to listen to the agonies of the Africans on the ground and not only be fixated on the long term wishful desires of comfortably sitting elites. Like its brethren in the West, the African sheeple seems ready to organize itself outside the logic of the current totalizing and polarizing globalization. Granted, there is a dire shortage of leadership in Africa when it comes to articulating a more sustainable alterative to the reigning neoliberalism. Reasons abound; lack of meaningful democracy, etc., etc. As the saying goes; ‘revolutions will forge their own leadership’ and Africa will have to wait for their timely arrival. Unfortunately, the majority of African nation states do not seem to fully appreciate the protracted problems associated with the current lopsided globalization and are merely/gullibly following the marching orders of the system’s bosses. On the other hand, the African sheeple doesn’t seem to buy the likes of ‘Africa Rising’ meme of the continent’s neo-liberalizing elites at the service of capital, transnational or otherwise!

For any organization to function properly and achieve its short term as well as long-term objectives, there must be tangible commitment on the part of its members. In this regard, the performance of the AU (as an organization) along with its constitutive members, leave a lot to be desired. When members fail to fulfill critical obligations, like annual contributions/fees, etc. required for operation or when they purposely undermine the capacity of the organization by insisting to assign useless cronies, not only to vacuously created positions, but also in position of leadership; the institution’s performance cannot be expected to inspire confidence. Out of expedience foreign governments have been willing to support some of the critical functions of the organization, like ‘peace & security’, etc., but this cannot be taken as a model for sustainable financing. Member countries must be serious about their obligations to the institutions; otherwise the whole thing will be just a farce leading to functional irrelevance and inevitable institutional collapse. So far the AU has been a mere talk shop without delivering much substance to the continent’s overall well being!

To reignite the AU, a draft reform proposal is expected to be tabled to this week’s Summit in Addis. It is hoped the recommendation, to be presented by President Kagame, will sufficiently address the critical problems of the AU. Hopefully the reform will galvanize the institution to become a more committed and visibly competent voice of not only the African states, but also the people at large. One should realize that non-stop bureaucratic maneuvering and continuous angling for positions, by meddling politicos, is a sign of a feeble and corrupt organization. AU must abandon these futile weaknesses if it wants to survive, let alone thrive. We hope the reform will take precedence over the election of the new AU head so that the new system can kick in without undue interference from erstwhile routines.

At the end of the day, a resilient socio-economic alternative is what Africa must strive for, particularly given the severe climate change that is clearly upon us. To this end, a new dynamic and forward-looking leadership is a must. The current crop of African leaders (state or otherwise) are hardly capable of grabbling with our precarious predicament subsumed inside a complex global reality, with a view to foster a resilient development strategy outside the overwhelming but confining logic of the globally dominant and yet destructive ‘techno-sphere’! Be that as it may, instead of silent desperation, we should probably cling on to the late Pan Africanist’s slogan (who was cut short on ‘Africa Liberation Day’): “Don’t Agonize, Organize!” Dr. Tajudeen Abdul-Raheem  (1961-2009). Good Day!

Massive greed and the COVID 19 pandemic

COVID-19 economic crisis to pull 32 million people back into absolute...