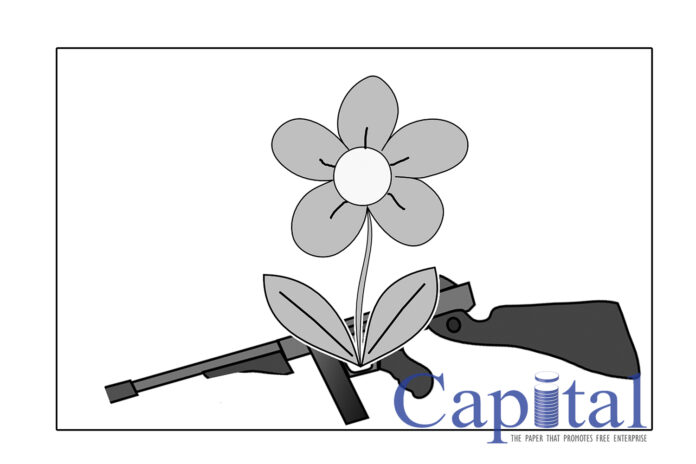 In late modernity, global dominant interests are trying hard to establish a general motto for all human societies. One can capture this maxim, willy-nilly, as: ‘anything goes and nothing matters.’ The implied message being; at the end of the day, not much matters and one must just accept this fact of life and deal with it. Of course, this fatalistic and sinister ideology goes against the grain of history, and yet, the power that be wants to make it the premiere global religion, at this late our! Undoubtedly, it has its important strategic use for the rulers of the system. The most important being; the complete pacification of the sheeple (human mass), while at the same time bestowing an aura of invincibility to the parasitic elites and their deep state. History is always on the move, whether one notices it or not. ‘End of history’ is as absurd as humanity without its languages, but we digress!
Trying to elevate insincerity to one of the highest form of civilized values cannot be taken seriously, even by the zombified sheeple of our planet. Sooner or later, this farce will be exposed for what it is; a scheme to shut off all critiques based on rational thoughts. Nonetheless, the DS (deep state) and fellow travellers, maybe out of desperation, believe the trick might work if followed through. We beg to differ! So far, the doctrine of insincerity has managed to leverage the relativeness of human social constructs to establish certain legitimacy in some circles. However, by continuously banging on this path, the DS has initiated widespread suspicions. To recall; we have defined the deep state as the military-intelligence-industrial-banking-media-complex of empire. For instance, what is being portrayed as ‘woke culture’, to some extent, is a reflection of the not so rational strategy employed by the global power that be. Even though we have nothing against the aspirations of many who claim to uphold all that is spewed by the ‘woke culture’, there are some issues that still need interrogating. Here is the observation of the first mixed race president of the US on ‘wokism’. “I get a sense among certain young people on social media that the way of making change is to be as judgmental as possible about other people. If I tweet or hashtag about how you didn’t do something right or used the wrong verb, then I can sit back and feel pretty good about myself because ‘Man did you see how woke I was? I called you out!”
The innate enemy of insincerity is sincerity, a no brainer; but the implication of this is not trivial, as it can dethrone everything that has been based on the ideology of insincerity. Sincerity underlies all science, therefore, unless science is ‘made’ insincere by hook or a crook, i.e., pseudoscience, the current system of banal ‘wokism’ might not hold for long. In our complex world system, science is no more a straightforward replicable affair. Myriad factors come into play when, for example, a complex experiment is scientifically attempted to verify claimed findings. Complexity necessitates big science and big science can be used as an effective obscurant in the ascending woke culture of the descending empire. Since big money commands big science, public/state universities have become, literally, corporate labs or campuses at the service of transnational capital. As a result, transnational capital is playing a significant role in derailing kosher science while empowering pseudoscience! It is no wonder individual researchers, not in agreement with the logic of capital, are treated as aliens from yonder!
When science is represented by big science/paid science, facts and truths tend to give way to fancy fanfares devoid of substance, which can only portend the coming of another era of darkness! Before long, the ‘witch hunt’, ‘human sacrifices’, etc., might be reincarnated in their modern equivalents. Luckily, we still have some individuals still committed to the tradition of enlightenment, always seeking scientific truth. Unlike the trashy science of the dominant interests, which is propagated by the DS/Davos crowd, here is (see the article next column), for instance, the ‘Facts on Covid-19’ from the same country of Switzerland, but by the credible Swiss organization, Swiss Policy Research. See also the articles on page 52 & 53. Inquiring minds probably know something about ‘The Lancet’ (UK) and the ‘New England Journal of Medicine’ (USA). These are probably the two most prestigious medical journals in the world. Now get ready for the real shocker!
“The case against science is straightforward: much of the scientific literature, perhaps half, may simply be untrue. Afflicted by studies with small sample sizes, tiny effects, invalid exploratory analyses, and flagrant conflicts of interest, together with an obsession for pursuing fashionable trends of dubious importance, science has taken a turn towards darkness.” Robert Horton, editor in chief of ‘The Lancet’.
“It is simply no longer possible to believe much of the clinical research that is published, or to rely on the judgment of trusted physicians or authoritative medical guidelines. I take no pleasure in this conclusion, which I reached slowly and reluctantly over my two decades as an editor of The New England Journal of Medicine.” Dr. Marcia Angell, editor of ‘The New England Journal of Medicine’. Good Day & Good Year!