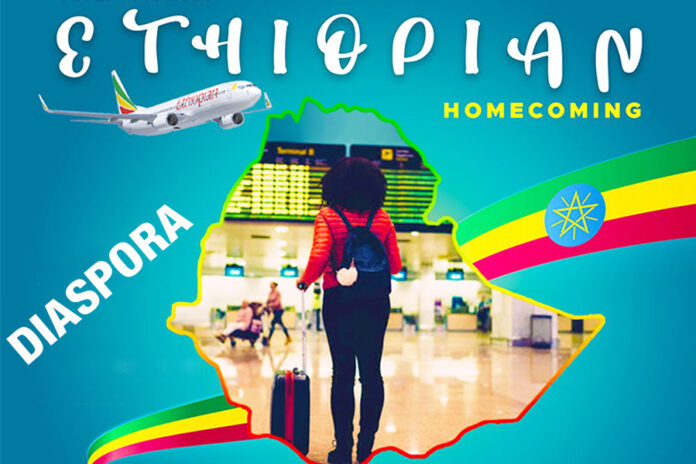 Around 100,000 Diasporas respond to the Prime Minister’s call for the great Ethiopian home coming challenge within a space of one month.
Aimed to minimize the increasing pressure of the western governments on the government in connection with the war in the country, Prime Minister Abiy Ahmed called Ethiopians and friends of Ethiopia to visit Ethiopia for the Ethiopian Christmas and Epiphany after completing the first phase of the war.
As reports from the government officials shows, a hundred thousand Ethiopian Diasporas and friends of Ethiopia responded to the challenge within the short period of time with the organized events reeling in success.
Throughout the month, the government hosted various events to engage the Home Comers in the reconstruction process and peaceful protests against unnecessary external pressures on the country and different events have likewise been held by the private sector.
Some of the notable events include those by the likes of the Ethiopian Investment Commission which promoted various investment opportunities, the grand dinner hosted by the diaspora agency and diaspora community, amongst other different exhibitions.
“The home coming challenge has four goals; diplomatic, economic, political and social affairs,” said Wondwossen Girma, Public Relations Manager at Ethiopia Diaspora Agency, adding, “The home coming challenge has been successful as one of the main goals is fundraising and support for the reconstruction as well as aid for the war victims.”
Many of the participants who have already arrived have brought very useful medical consignments that are to be used to equip the hospitals and other health service providing institutions across Afar and Amhara. Moreover, as reports show, the Ethiopian government has earned around 800,000 dollar from the dinner.
“The Diasporas and friends of Ethiopia have been successfully defending Ethiopia’s stance in the international arena to dismantle internal and external enemies’ conspiracies,” said Wondwossen stating that the event shows government’s belief on its diaspora community to which the diaspora have reciprocated the same through their rise to the call.
As government officials inform Capital, around one hundred thousand of Ethiopians responded to the Prime Minister’s call. “The number does not really matter, the weight of the impact matters most and in our case we have seen the huge impact that it has brought,” said Wondwossen indicating that the agency has asked the Immigration Nationality and Vital events Agency for full information with regards to the exact figures.
This homeland exodus by hundreds of thousands of Ethiopians is not an ordinary home coming. The challenge takes place amidst the struggle that is being conducted by heroic Ethiopians and foreign nationals of Ethiopian origin here and in the diaspora as well as by the National Defense Forces and Amhara Security Forces, and by the entire Ethiopians against the terrorist TPLF.
The Great Ethiopian Homecoming Challenge from the onset aimed to draw one Million people home ahead of the Ethiopian Christmas holiday. This historic homecoming event is the first of its kind only seconded by the home coming event that was conducted during the Ethiopian Millennium celebrations. The Ethiopian Airlines, Ethio-telecom, private and government-owned hotels, and other service giving institutions announced discounts on their services to make the challenge attractive.
A huge number of tourists and Ethiopian Diasporas have thronged to the celebration of Ethiopian Christmas in Lalibela and in the historical town of Gonder to celebrate the colorful Ethiopian Epiphany.
As Wondwosen said at a future time, the agency will organize an assessment to see the economic impact of the event.