Ethiopia has become the first African nation to chair the global airfreight institute that promotes international air cargo.
The annual congress of the International Federation of Freight Forwarders Associations (FIATA), the global logistics association, has also approved the chairmanship of Ethiopia for its regional wing.
On the congress of FIATA held two weeks ago, Ethiopia was elected to chair one of the four FIATA’s regional wing, Region Africa and Middle East (RAME), and the Airfreight Institute (AFI).
According to Ethiopian Freight forwarders and Shipping Agents Association (EFFSAA), who is member of FIATA, two Ethiopians have been nominated by the association to chair the international associations.
It was stated that the competition to get the position for AFI was very tough since the interest from western countries was very high, while Ethiopia successfully secured the post with higher vote.
As a result, the former president of EFFSAA, Salahadin Khalifa, and the current vice president of EFFSAA, Dawit Wubshet have been nominated by the association for RAME and AFI respectively.
The local association that was formed in 1998 indicated that Salahadin, who is well know by his active involvement on the logistics issues and leader of one of the biggest logistics company in Ethiopia has been elected to chair RAME for two years. Before he came to the top seat, Salahadin served RAME as vice chairman.
Similarly Dawit, who has ample experience on the sector, has been elected to lead AFI for the coming two years. 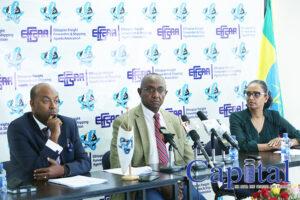 The assignment of Dawit at AFI was also stated as historical since he is the first chair from the African continent to lead the over five decades institute which has actively pursued its mandate to define, craft and promote the role of the forwarder in international air cargo.
AFI is inclusive of a wide spectrum ranging from non-governmental organizations, special interest groups, government bodies, regulators, carriers, shippers, consignors, customs groups, legal specialists, cargo risk underwriters and technology providers.
AFI’s has a proactive posture on issues which may impact the international forwarding community and has reputation within the global transport industry as the go-to group for consultation and action on air cargo issues.
The EFFSAA said that the latest development is indicated that the capacity of the two individuals, “it a big recognition for the association, who is representing the country to have a big role in the international arena.”
It is stated that the opportunity to lead the two logistics associations shall benefit Ethiopia to pursue the experience of others in the sector development, while it has also an input for the country to make it a hub for logistic services.
“The representation of Ethiopia on these higher bodies shall also facilitate the opportunity for the local association to promote and attract foreign direct investment, job creation and technology transfer,” EFFSAA said on the press release sent to Capital.