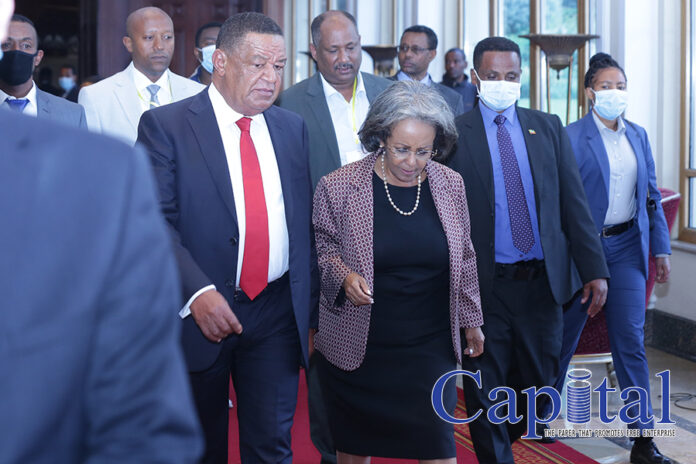 Entrepreneurial Forum for Peace and Development (EFPD) – a forum built on the foundation of engaging the business community in the peace process of the country whilst promoting peace and fostering development across the IGAD region has officially been launched.
On an event held on Monday August 1, 2022 at Sheraton Addis hotel with the presence of president Sahle-Work Zewde, former president Mulatu Teshome and different senior government officials and the business community, as well as representatives of embassies and international organization; the forum has officially kicked off .
The forum is a non-governmental organization headed by former President and Prime Minister of Ethiopia, Mulatu Teshome, and Hailemariam Desalegn and works towards the promotion of peace and development in Ethiopia and gradually to the IGAD region to promote peace and economic growth in the region. Also EFPD is expected to engage in a wide range of activities that will help foster job creation and investment in the region. “There is no sequencing between peace and development rather there is a nexus between the two,” said President Sahle-Work Zewde in her speech during the ceremony adding that, “We have to work on peace as we have vividly seen how lack of peace can have a downhill turn in the development of a country.”
EFPD Executive Board Chair and former Ethiopian President, Mulatu Teshome said that the private sector was at the receiving end of all the damages caused by the war in the country over the past years.
“The forum, by coordinating the business community, will work to resolve conflicts in Ethiopia and the region through peaceful means, to prevent conflicts from occurring and to carry out rapid rehabilitation after they occur, to continue economic and social development activities on a regular basis,” Mulatu elaborated.
EFPD General Assembly Chairperson, Belayneh Kinde said that the country’s current situation forces the private sector more than any other time to stand for peace.
He added that the business community is committed and determined to actively participate in the government’s efforts to ensure peace and sustainable development.