Oromia International Bank rebrands itself to ‘Oromia Bank’ changing its trade mark as well as its name. The bank reveal its updated name and new trade mark on Thursday December 2, 2021at Sheraton Addis luxury hotel with the presence of senior government officials including Yinager Desse, governor of the National Bank of Ethiopia, Shimels Abdissa President of Oromia Region, Adanech Abebie Mayor of Addis Ababa as well as chairman and president of the bank.
The bank has been using its name and trade mark for the last 13 years ever since its establishment in 2008. The bank took the past 20 months in re-branding its traditional logo to the new one which imitates a picture of a horse, and the bank’s president, Teferi Mekonnen, described the logo as an image that “represents all,” as the bank strives to reach upward in promise, outward in friendship, and forward in confidence. 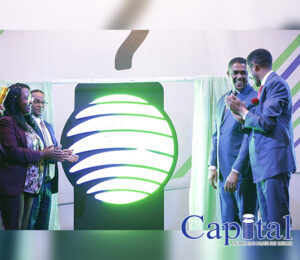 “The update was necessitated mainly for economical and global reasons and to keep pace with the current level of development and changing competition,” said Teferi on the inauguration ceremony. “Making the logo and trade mark more attractive and simple is also a reason behind the newly-to-be- unveiled adjustments. We focus on operational excellence and ground of typical sparkling culture of identity for reputation through which the bank is well known by others,” he added.
Including introducing Interest Free Banking-Financing (IFBF), the first of its kind to be launched by a private bank in Ethiopia, Oromia bank ticked out in full gear introducing new bank products to reach the unbanked society. Currently, the bank has more than 270 branches over the country including the capital.
“We are committed in providing a full-fledged and best quality commercial banking services within the pertinent regulatory requirement with due diligence to sustainable business while empowering the missing middle and discharging social responsibility by engaging highly qualified, skilled, motivated and disciplined employees and state-of-the- art information technology,” the president explained.