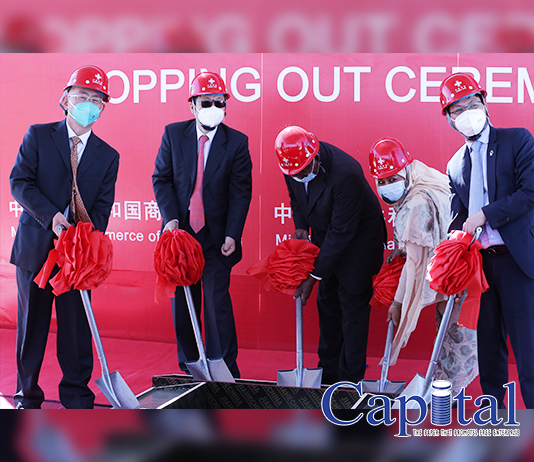 The Chinese aided African Union’s Center for Disease Control and Prevention (Africa CDC) headquarters building project commemorated it’s topping out ceremony at the project site on Friday November 26. The topping out ceremony marked the completion of the first phase of the project.
Construction of the headquarters began in December 2020 with the project completion scheduled in 24 months. The headquarters rest in an area of 40,000 square meters. After completion the facility will house laboratories, emergency operation center and offices among others.
Within a construction period of less than a year, 45 percent the project is completed consuming USD 20 million out of the total budget of USD 100 million. The project is fully funded by the government of China.
During the ceremony, head of China’s Mission to the African Union, Ambassador Liu Yuxi praised the partnership between China and the AU. 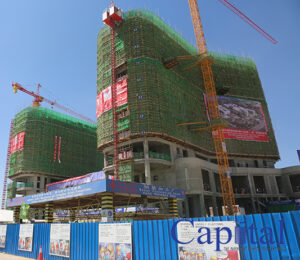 The implementation agreement on the Africa CDC HQs building project was signed in July 2020 between the AU Commission and the Ministry of Commerce of the People’s Republic of China.
The headquarters in Addis Ababa will be finalized by early 2023. Africa CDC has a plan of building additional five Regional Collaborating Centers in Egypt, Gabon, Kenya, Nigeria, and Zambia in the near future.
The Africa CDC was established in January 2016 by the 26th Ordinary Assembly of Heads of State and Government to improve coordination among health institutions among African Union member states in dealing with disease threats. African Union member states had first considered the idea of establishing a continent wide public health agency in 2013 at an AU Special Summit on HIV, Tuberculosis and Malaria in Abuja Nigeria. The idea was proposed by Ethiopia, then the Chair of the AU. The 2014 Ebola crisis accelerated the establishment of the Africa CDC, and also shaped perceptions of what its main purpose was to be and strengthened the importance of health emergency prevention and response. In July 2015, the African Union Ministers of Health meeting in Malabo had adopted the Statute of the Africa CDC, which called for fast-tracking the establishment of the institution. The agency was officially launched in January 2017.