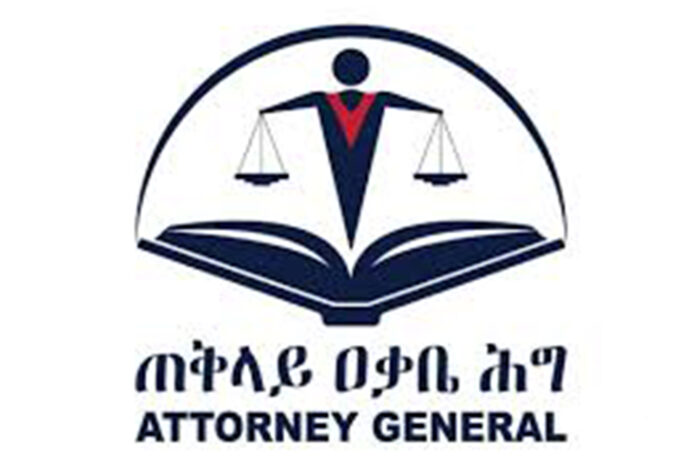 The Federal Attorney General (FAG) filed massive criminal charges on ten individuals and companies in relation to involvement with eight criminal acts including money laundering, financing of terrorism, illegally confiscating others property and illegal money transfer.
The charge was filed at the Federal High Court- Lideta Criminal Bench and indicated that seven individuals and three companies, have been sued on allegation of criminal acts that they did from 2016.
The individuals that were sued are Haregewoyne Tedla, Azeb Miretab, Efrem Mulatu, Temesgen Yilma, Adefres Habte , Daniel Tibebu and Mesfin Asmamaw. The companies included on the charge file are; JJ Properties Management PLC, TTH Trading PLC and Boston Real-estate.
The file indicated that the individuals were involved in an illegal act that entailed forceful confiscation of a seven floor hotel property owned by Cosmo Trading PLC. The property is located at Wolo Sefer, Bole and was confiscated as collateral for the compensation of a loan.
FAG’s charges stated as follows: Efrem (Defendant 3) had swayed Haileyesus Mengistu (plaintiff and owner of Cosmo Trading PLC) to take a loan from Azeb (Defendant 2) when he was faced with a liquidity crunch. The charge adds that Azeb (Defendant 2) stated the money needed would be availed to Cosmo Trading PLC by Haregewoyne (Defendant 1), who lives in the US. In June of 2016 a non-formal or traditional agreement between Haregewoyne and Haileyesus (plaintiff- ‘accuser’) was signed for the provision of 50 million birr with a nine percent interest. Azeb and Efrem (Defendant 2 and 3) were witness signatories to the traditional agreement. In addition, the collateral for the loan was the seven-storey building which has an estimated worth of 250 million birr, the charge stated.
According to the charge, whilst the two parties had agreed on a 50 million birr loan, only 3.2 million birr was transferred from Azeb’s United Bank account to Cosmo Trading PLC of the same bank.
The charge further states, that the defendants accused Cosmo Trading PLC for not paying the 50 million birr (of which they only gave 3.2 million) and as a result forcefully secured the property that the company placed as collateral. JJ Property Management PLC bought the company for 60 million birr, despite the company not having any legal registration.
Following this acquisition, Azeb and Temesgen (Defendant 2 and 4) got the right to administer Cosmo Trading PLC. Using this privilege, they received a 61 million birr long time loan from Awash Bank using Cosmo’s 7 storey building as collateral.
From the 61 million birr approved by Awash bank, 21 million birr went into paying the loan that the company had at United Bank (Friday, the 22nd of March, 2019). The remainder, 40 million birr, was wired to Cosmo’s account the following Monday. (25th March, 2019).
The charge indicated that on the same day Cosmo received the 40 million, from the amount 32.5 million was wired to JJ Property Management’s account. Azeb is a major shareholder and general manager of JJ property whilst Temesgen has the power of attorney.
According to the charge from the stated date of the first money transfer, several similar money transfers had been done to different accounts of individuals and companies from the remainder of the 40 million birr.
Some of the transfers on individual accounts are stated as money sent from abroad for different residents, which the Attorney General called as witnesses on the charge.
The FAG charge file claimed that the 2nd, 4th, 5th and 9th defendant conducted illegal banking businesses as well as involvement in money transfer that affected the foreign currency revenue that the government shall obtain.
Apart from the stated amount, an additional ten million birr over a draft short term loan was released by Awash Bank to the company in August 2019.
The charge claimed that in exclusion of the 21 million birr paid to the United Bank for the loan settlement by Awash Bank, the rest of the money was spent on unrelated businesses that were not in direct benefit to Cosmo.
The Attorney General’s charge has also claimed that the 2nd defendant gave a misleading testimony to the Federal Police in March 2017 on Police investigations in relation to the USD 1.8 million transfer.
FAG has called 35 individuals as witnesses who include well known individuals in the business community to testify the case besides 62 testimonial documents with 822 pages.
The case was filed at Lideta on September 25.