The Addis Ababa Cultural and Tourism Bureau plans to file charges against Muller Commercial Real Estate for demolishing the historical Ras Abebe Aregay House located at Adwa road near Aware. Muller is planning to build a G+19 apartment complex in that location.
The Bureau told Capital that the home was listed as one of the 440 historical houses in the city’s master plan. It sits on 1,800sqm and was constructed 70 years ago, and was used as a residence for Ras Abebe Aregay and his family.
Initially the famous athlete Kenenissa Bekele bought the house from Ras Abebe family. Then he later sold it to Access Real Estate. Then Access Real Estate sold it to Muller for 14 million birr.
Before the demolition Italians rented the house from Muller and used it as a restaurant.
Abebe Abera, a legal expert at the Bureau said Muller Real Estate was warned not to demolish the house.
“We received comments from people in the middle of the demolition and we wrote a letter telling Muller to cease and desist but they completely destroyed the place. As a cultural bureau we are responsible for protecting heritages and we have sent documents to Yeka Police to sue Muller,” he said.
Mulegeta Tesfakiros, founder of Muller Real Estate said the company passed through legal procedures before they demolished the house.
No procedure was overlooked before we began the demolition. We got approval for the construction and demolition of the house from the concerned bodies. We also received approval from the city which said the old house was not on the list of historical heritage sites.
“However, after we demolished the house the Wereda officials told us that the house actually was on the list of historical heritages when we began building the new apartment, so we received mixed messages” Mulugeta told Capital.
Under the current heritage proclamation in Ethiopia if somebody illegally demolishes a heritage site they may face up to 10 years imprisonment plus a fine.
Apart from the demolished house there are two old Ras Abebe Aregay homes found in Addis Ababa located in Arada Sub City.
Ras Abebe Aregay was a major leader of the resistance in Shewa against the Italians during the fascist occupation, and leader of the largest anti-occupation force in Ethiopia. Abebe Aregay was the grandchild of Menelik II’s loyal General Ras Gobena Dachi. As Balambaras Abebe Aregay, he had been commander of Addis Ababa’s metropolitan police before the 1936 occupation of the capital. After the Emperor’s departure and the Italian occupation, the then Balambaras Abebe Aregay was proclaimed a son of Lij Iyasu at Amba Aradam as “Emperor Meleke Tsehai” in 1938, and was given the title of Ras. However the young claimant died of an illness soon after, and Abebe Aregai returned to supporting the restoration of Emperor Haile Selassie. Emperor Haile Selassie again granted him the title of Ras legitimately, and he was among the guerilla leaders that escorted the Emperor back into Addis Ababa on Liberation Day, May 5, 1941. Ras Abebe served as governor general of Shewa, governor general of Tigrai, Minister of Defense, Minister of the Interior, Crown Councilor and Senator at various times. He was killed during the Imperial Guard coup attempt of 1960 and was buried at Debre Libanos Monastery. 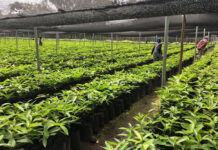