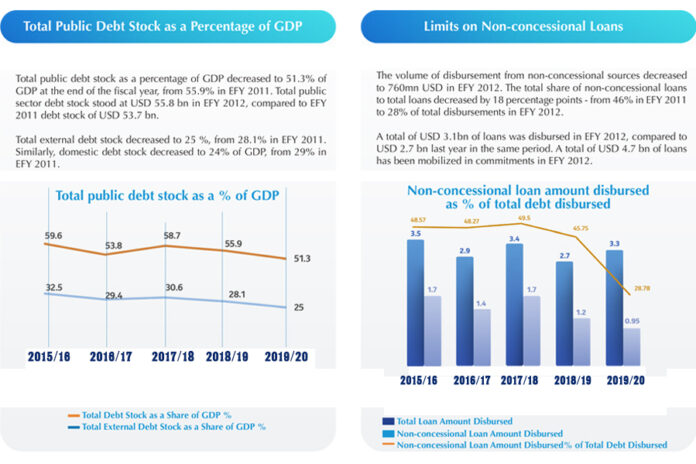 On its Home Grown Economic Reform Agenda (HGERA) progress report, the Ministry of Finance (MoF) average parallel market has shown reduction in the 2019/20 budget year; while it reveals that under medium-term debt management strategy (MTDS) it will introduce a cost-risk trade-off for composition of the government debt portfolio.
The report that evaluates the first year of HGERA that is during the 2019/20 budget year indicates that the country has got USD 2.5 billion worth of debt restructure. It further added that the government is looking for more debt restructuring that is worth over USD 1 billion.
The report that was issued mid this week stated that MTDS is currently under preparation and aims to revise the composition of the government debt portfolio through a cost-risk trade-off.
“The new MTDS will also incorporate a mechanism to manage the debt of SOEs, which provides a broader picture of the public sector’s debt portfolio and debt sustainability strategy. This is expected to be launched by the end of the 2020/21 fiscal year,” it added. The 2020/21 fiscal year ends on Wednesday July 7.
According to the report, the existing debt directives are under review to employ a more rules-based mechanism for contracting and guaranteeing public debt, and the consolidation of oversight over public debt. 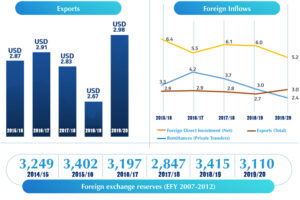 Since the coming of Abiy Ahmed as a premier his major task in related with the country debt burden was that lobbying foreign partners to ease the repayment of the country that was due.
Regarding the debt restructure, MoF said that USD 2.5bn in principal and interest payment has been postponed for five years by commercial creditors under the first external debt restructuring scheme.
“Negotiations are underway with creditors for the second external debt restructuring or re-profiling scheme, with an expected restructuring of more than a billion USD. The restructuring is expected to provide up to a six years grace period and ten years of maturity extension,” it added.
Besides the debt restructure aligned with direct negotiation, the country has been one of the eligible countries that got some official debt restructuring in connection with the presser of COVID 19 on the economy.
Under the G20’s Debt Service Suspension Initiative (DSSI) Ethiopia has benefited debt service suspension of close to USD 125 million.
MoF evaluation report indicated that measures to improve the country’s risk of debt distress from ‘high’ to ‘moderate’ were successfully implemented, “concessional loans were limited to ongoing projects, where the share of non-concessional loans to total loans decreased from 46 percent to 13 of total loans disbursed.”
At the end of the 2019/20 fiscal year total external debt stock decreased to 25 percent, from 28.1 in the preceding year. Similarly, domestic debt stock decreased to 24 percent of GDP, from 29 percent.
The restructuring has also included the domestic loans, “domestic central government debts have also been restructured by converting short-term bills to long-term notes and bonds.”
It explained that 192 billion birr NBE direct advance amount was restructured by converting the 15-year bond/ repayment period with a 10 year grace period, “149.3 billion birr old treasury bills were converted into long-term treasury notes. This arrangement improves the lending terms for the domestic creditors as well as lessens the immediate debt service burden on the government.”
Regarding direct advance it said it was notably minimized. The NBE net direct advance to the budget was maintained at 15.6 billion birr, showing a 61 percent decrease from the previous fiscal year.
The volume of disbursement from non-concessional sources decreased to USD 760 million in the reported period. The total share of non-concessional loans to total loans decreased by 18 percentage points – from 46 in 2018/19 fiscal year to 28 percent of total disbursements.
It added that the economy showed strong resilience during the past fiscal year in the face of the global economic downturn due to the COVID-19 pandemic. Growth was kept at 6 percent. The agricultural sector especially showed remarkable growth as it grew at 4.3%, while manufacturing and service sectors showed a slight negative trend after the second half of the fiscal year, when COVID 19 occurred. In the reported year exports showed a 12 percent increase after close to a decade of stagnant performance, while the foreign exchange reserves improved to USD 3.1 billion covering 2.5 months of imports.
As another success, MoF show that financing of the budget was managed through improved tax revenue mobilization, concessionary external finances, and raising funds from local markets, “tax mobilization increased by 16 percent, the budget deficit was maintained at 2.8 percent,” the report underlined.
It indicated that judicious monetary policy was pursued with contractions in broad money growth (maintained at 17 percent), along with notable improvement in the financial sector. A savings growth of 16 percent was achieved, while credits were expanded by 14 percent.
“Gradual measures are underway towards a market-based exchange rate regime, along with measures to improve and diversify sources of forex,” it said by adding that the average parallel market premium was reduced by 8 percentage points from June 2019.
The evaluation report of HGERA argued that private sector access to finance showed a positive trend, with fundamental changes undertaken to remove financial repression including the removal of the 27 percent bill and improvements in the financing of SOEs.
The private sector’s access to new credit increased by 20 percent – accounting for 64 percent of total credits in the fiscal year. The institutional frameworks for the establishment of capital markets are being finalized, which is expected to further boost the availability of finance in the economy.

Tax payers express frustration on the implementation of tax amnesty