Ethiopia’s new Navy will be based in Djibouti and the naval command head office will be in Bahir Dar. When Abiy Ahmed became Prime Minister, he announced that the country would rebuild its navy, redeeming its dissolution which occurred during the regime change in 1991 when the nation lost its water outlets.
Although the government announced they would resurrect the navy again its base had not yet been decided on. Assumptions were the location would be in Eritrea, Djibouti, or Sudan. A source following the case, told Capital that the government has decided to locate its initial base at Djibouti.
Sources indicated that during his latest travel to Djibouti on the third week of October the naval base issue was discussed by Abiy with Ismail Omar Guelleh, President of Djibouti.
France is helping the Ethiopian government rebuild the naval force and currently some of the naval personnel have already trained in France, a major power supportive of Ethiopia’s reforms.

Sources familiar with the issue say Ethiopia’s under formation navy has opened a temporary office at the facility which the Metal and Engineering Corporation (MetEC) uses as a head office around Mexico Square, separately from Ministry of Defense.
Sources said the naval command in Ethiopia will be based in Bahir Dar, capital of Amhara region. Brigadier General Kindu Gezu, is leading the reestablishment process in the position of Navy Force Commander, while the search continues for a formal Chief Commander, expected to come to conclusion in the coming weeks.
The military has been the pioneer of the reform agenda since Abiy came to power, he has stated that the reform should follow the dynamism of the world and the region.
A year ago Abiy said: “We built one of the strongest ground and air forces in Africa now we should build our naval force capacity.”
Since the separation of Eritrea, Ethiopia has become a landlocked country with the biggest population in that world that does not have sea port. However several recommended in this hostile region the country needs to have naval forces, for the last 28 years it has only had commercial vessels some of which are operated by former naval personnel.
Abiy’s first official visit was to Djibouti when the countries agreed on several things including swapping shares on enterprises in both countries and that Ethiopia would take stakes in Djibouti ports and develop a new port.
Before the PM came to power in April 2018, an Ethiopian delegation visited Obock, a small coastal town located on the northern shore of the Gulf of Tadjoura in Djibouti, to evaluate the area for a future port to be built by Ethiopia.
It is not confirmed if the naval base will be settled around Djibouti City like other bases or far from the capital.
Djibouti is connected with Ethiopia by two asphalt roads via Afar and Somali region and the modern electronic railway line to the major port outlet for Ethiopia. The country has already entertained big powers in the world including France and China to settle their military bases along its coastal lines.
Capital tried to get more information from the Press Secretary at the Office of the Prime Minister, the Ministry of Defense and Ministry of Foreign Affairs but was unable to do so. 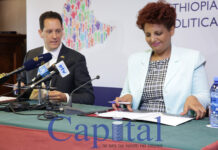 US to provide $30.4 million to support democratic elections

Crazy food prices to be investigated