As the global shortage of oxford AstraZeneca covid-19 vaccine deepens, the Ministry of Health has started effort to obtain 3 million more doses of Johnson and Johnson vaccine that could boost the sagging campaign to vaccination. Moreover, the Ministry of Health is considering continuing the use up of their stock of AstraZeneca COVAX vaccines as first doses on as many people as possible.
On March7, 2021, the country had received 2.2 million doses from 7.6 million quota of COVID vaccine made by AstraZeneca PLC – a British–Swedish multinational pharmaceutical and Biopharmaceutical Company supplied by the Serum Institute of India. But as the COVID-19 crisis in India spiraled, India restricted the export of vaccines as it grapples with a devastating resurgence of the disease. Through the COVAX facility the country was planning to receive its entire 7.6 million doses of vaccine until the end of April, 2021.
So far around 1.6 million people have received the first shot of the vaccine in Ethiopia, which leaves the country with less shots going into the second shot phase.
The WHO has repeatedly advised countries to use up their stock of COVAX vaccines as first doses on as many people as possible, rather than saving half of them for second dose.
Dr. Muluken Desta, an Advisor to the Ministry of Health and coordinator at the national COVID vaccination program, said it will be difficult to give the second shot for those who received the first shoot since the vaccine is distributed even to the sub strain health institutions including woredas and kebels. Several divisions had administered all the AstraZeneca vaccines they received, expecting new deliveries in order to give people their second dose. 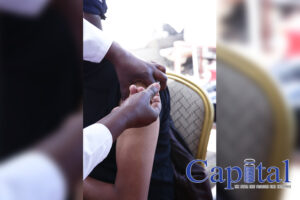 However, as he said to meet its need the government is considering several options to cope with the global problem. The first option is waiting for rich countries to share their vaccine to the COVAX facility.
On May 15 on press conference, Dr Tedros Adhanom, Director General of the World Health Organization urged rich countries to share COVID 19 vaccine doses to COVAX instead of giving shots to children. “Rich countries should reconsider and donate vaccine to COVAX since in some countries the vaccine is not enough to immunize health workers.”
As Muluken said the other option is supporting India to tackle the challenge of the pandemic and as soon as possible. As he said, the government is expecting to restart receiving the vaccines until mid-June based on its contract with the facility.
As its third option, the government is talking with the African CDC and the COVAX facility itself to procure additional vaccines. As Muluken said, the government is trying to procure 3 million doses of Johnson and Johnson vaccine through the facility and also the Ministry is talking with the Russian Embassy in Addis Ababa to get the Russian Sputnik 5 vaccine after checking it through the Ethiopian Food and Drugs Authority (EFDA) since the Russian Vaccine is not approved by the WHO COVID-19 vaccine for emergency use.
Dr. John Nkengasong, Director at the Africa Centres for Disease Control and Prevention recommended during a press conference on Thursday that if countries don’t receive doses of Oxford-AstraZeneca vaccines in time to give people their second doses, they should revaccinate those who received first doses of AstraZeneca vaccine with a second, single dose of the Johnson & Johnson vaccine.
The Johnson & Johnson vaccine was listed for emergency use by WHO on 12 March 2021.
As Muluken said, even if it takes long time, the interval time between the two shots will give time to import the second shots, perhaps the batch of AstraZeneca will expire in July which has to be used before the date.
China has also donated to Ethiopia 300,000 doses of the coronavirus vaccine developed by Sinopharm.

DARA in works to digitize vehicle and land transfer