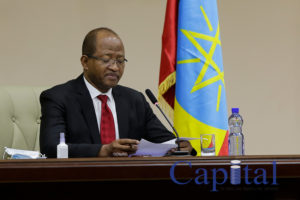 Tagesse Chafo, Speaker of the House, accepted most of the claims and said that changes are undergoing. He said that there are problems regarding ethics and protocol that are supposed to be solved. “The house has also shortage of staff that was in the process to fill but later suspended by the global pandemic, COVID 19, that also restricted most of the activities at the parliament,” he said.
Tagesse said that there were activities to hiring professionals but that was delayed due to the pandemic.
Meanwhile the parliament administration mismatch issue has taken several times at the discussion following the report of Shitaye Minale, Deputy Speaker, about the one year performance of the parliament.
The members said that differently the house has become powerful and independent compared with the past periods. “The freedom at the parliament now is different,” one of the members of the parliament said. But she expressed her concern that the freedom, which should be appreciated, sometimes went against the country’s culture and norms. “We observed that there were substandard debates and unethical phrases and arguments that did not fit the norm of the parliament,” she added.
Shitaye said that the construction of the new building for the parliament has commenced in the budget year. In the year 75 million birr has been allocated for the project and it is being carried out by initial payment of over 40.4 million birr, according to the Deputy Speaker.
This year the parliament ratified 58 proclamations.

Seed exports to be allowed in hopes of attracting international investors

UNDP signed MoU with Ministry of Innovation and Technology to support...