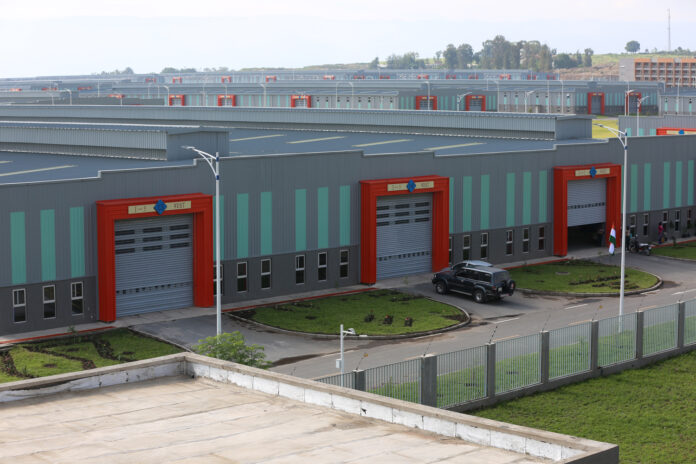 As part of the economic reform and privatization scheme the government is preparing to privatize governmental industrial parks as Ministry of Finance starts to study financial viability.
Regarding the revised economic reform the government of Ethiopia has announced its intention to privatize various government owned entities including sugar factories, airlines, logistics and the telecom sectors. In addition, the government has started to pursue a policy to encourage the participation of the private sector in the economic growth.
Similarly the Ministry of Finance has started to assess financial viability and profitability of privatizing the parks along with the development of market strategies.
According to Sandokan Debebe, CEO of Industrial Park Development Corporation, the Ministry of Finance is taking the lead on the initiative and a further task force has been launched from different stakeholders to study the viability and the profitability regarding the market policy, “The goal is to privatize some of the industrial parks to increase the income of the government and in that regards the valuation might be finalized in two months’ time,” he said.
In Ethiopia, industrial parks and special export zones have been actively constructed since 2017. There are more than 59,000 employees working in industrial parks.
Currently there are 13 governmental industrial parks of which 10 are fully operational including Jimma, Bahirdar, Bole Lemi 1, Adama, Diredewa, Hawassa, Jijiga Kombolcha, Debrebirhan, Mekelle, and two industrial parks Kilinto and Bole Lemi 2 are pre operational. Moreover Semera Industrial Park is under construction and the government is also planning to build Adama Huna Industrial Park in Adama.
According to the CEO, the plan is to privatize some selected industry parks accordingly which could help the government to get finance to build other new industrial parks.
Even if the privatization scheme in industrial park is in the process of study, as one part of its administration modalities, Jimma has been sold to the Chinese company Huajin, which operates a large-scale footwear factory in Ethiopia, after completion of construction. Huajin manages the industrial park and solicits other Chinese companies as tenants. Bahir Dar Industry Park was sold to a Hong Kong company and is expected to be occupied by a Hong Kong swing factory but still is administered under the IPDC.
Ever since the Hawassa Industrial Park, Chinese companies have dominated the entire share of contracted construction companies.
“The rapid pace of development of industrial parks is extremely critical to various political priorities, such as supporting the economic development of the manufacturing and export sectors, balancing international incomes and expenditures, and acquiring foreign currency, as well as directing the resulting revenue streams to local governments.”
Also in related news, the Public Enterprise Holding and Administration Agency /PEHAA/ is preparing to hire a transaction advisory firm to consult the privatization of eight of the thirteen state owned sugar factories as the Ministry of Finance has done the valuation process and all the technicalities to the privatization of the sugar factories.
The Ministry has carried out all the necessary work that are pertinent for a successful privatization transaction of the factories which are Welkayit, Tendaho, Kesem, Omo Kuraz-1, 2 and 3, Arjo-Dedesa, and Tana Belese.
As the document of the of expression interest shows, the transaction advisor is expected to prepare a comprehensive plan and recommendation for a successful privatization transaction, undertake the necessary market research and carry out a detailed analysis of alternative transaction approaches.
The advisory is also expected to assist the client in any activities subsequent to bringing a strategic investor on board.
Although Ethiopia disclosed plans to privatize sugar factories two years ago, no sugar factory has yet been privatized. So far, thirty companies have submitted their expression of interest to take part in the privatization process.
10 of the 13 sugar factories with the exception of the old sugar factories Metehara, Fincha, and Wonji, will be privatized.

Addis gets another mall

CROSSROADS OF SYMBOLS AND SUBSTANCE

How many of our beloved ones we lost to irregular migration?...