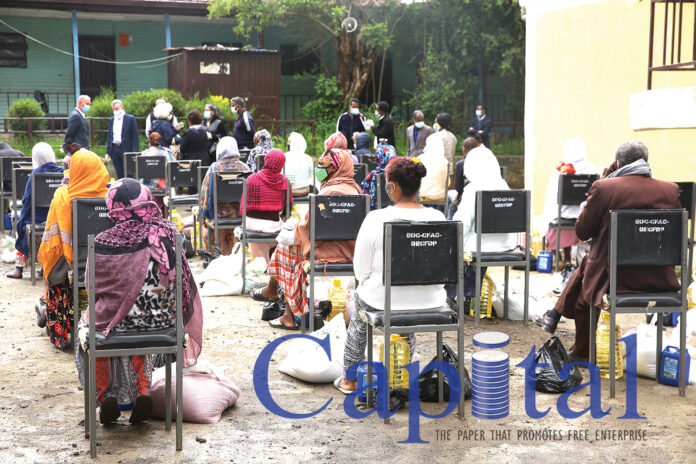 formed to strengthen cooperation and friendship between French and Ethiopian communities, launched a three-month food support project for disadvantaged students of Hizbawi Serawit School and their families.
The project that runs for three consecutive months will benefit 100 children in need of support at the school with their families. To realize this project members of SMLH, BGI Ethiopia, Capital Newspaper, Syscom Plc and other companies and individuals came together to contribute their part as their corporate social responsibilities.
For SMLH providing support for Hizbawi Serawit School is not the first time; few months ago the association has also inaugurated a tap water and hygiene facilities for the students. 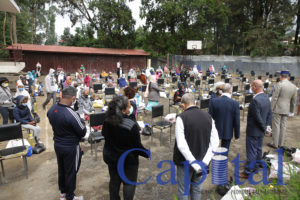 At the current stage SMLH has provided a basic need support for 100 students and their families aiming to alleviate the challenges that they face in relation to the COVID 19 pandemic. Previously these students were included in the City Government of Addis Ababa school feeding initiative. The initiative provides breakfast and lunch to children who go to school.
Teguest Yilma, President of SMLH-ONM Ethiopia, during the project launch said that over 500 family members will be beneficiary of this initiative. She said that the support will continue for the next three months. “On the basis that each student will have more or less five family members, the support we organized today will feed a family for one month,” she said.
She further noted that this initiative follows the call by PM Abiy Ahmed to help those in need in these difficult times. “We come forward to help these students and their families for food supplies for three months, this one is the first of the three rounds of help that we are committed to deliver,” said Teguest.
Students and their families will get basic food items like edible oil, rice, teff, flour and sanitary products for three months until the end of the rainy season.
During the launching ceremony which was held at the school’s premises on Saturday June 6, Dagnew Gebru deputy head of Addis Ababa Education Bureau said that these kinds of support will help the students and their families to pass these difficult times. “We are very grateful for the support SMLH provided today. This will also inspire others to do their part to help our students,” Dagnew said. 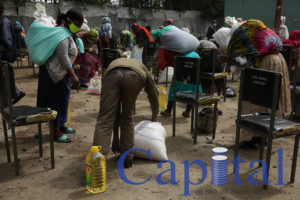 Several actions have been carried out by the members of the SMLH for the benefit of this establishment, in particular through educational projects.
Colonel Stephane Richou, devoted advocate of SMLH-ONM Ethiopia, addressing the gathering said “this corona virus pandemic, instead of dividing and scaring us, has rather brought us together, strengthening our solidarity between two old friends, France and Ethiopia, but also the world over.”
“The military mission of the French embassy is much attached to this school, because there are in this school several children of veterans of the Korea and Congo wars. Our parents and grandparents have fought together.”
“Today’s gesture where a lot of generosity was expressed is small compared to the formidable gesture that your parents and grandparents contributed for the fight for freedom,” he thanked the parents.
The Ethiopian section of the SMLH has supported the school in Addis Ababa which is located in a popular and historic sector north of the capital. Close to the French Embassy, this district, called “Farensaï”, was reserved in the 1960s by emperor Haile Selassié for the settlement of the families of the combatants who participated in the first peacekeeping operations in Korea and Congo. 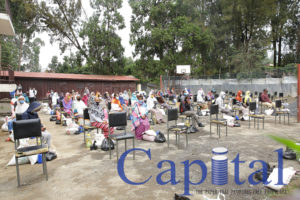 The association of SMLH – Ethiopia was formed in 2013 by the recipients of the French government’s award of the Legion of Honor in recognition of eminent services rendered to their country and the strengthening of franco-ethiopian bilateral relations.
This Section of the SMLH-ONM Ethiopia traditionally brings together the decorated of these two French National Orders living in Ethiopia, both French and Ethiopian nationals.
Since 2017 the section was joined as ‘Friends’ by those honored with French ministerial awards, mainly academic awards in arts and literatures as well as agricultural merit, maritime merit among others.