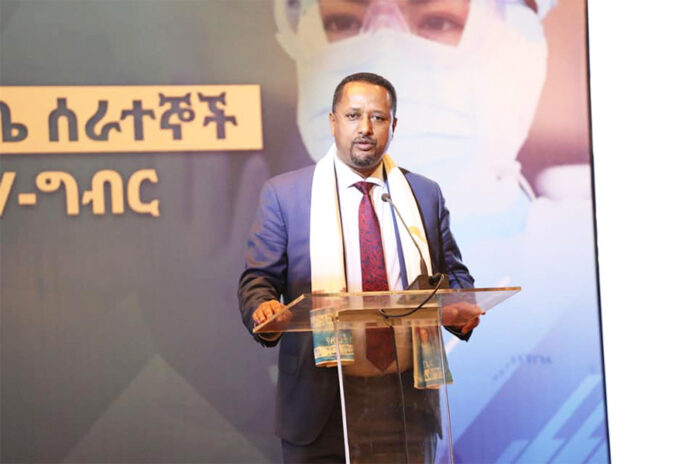 The manufacturing moguls back the National Defense Force with two hundred million birr in a single meeting, Capital learnt.
On the meeting chaired by Janitrar Abay, Deputy Mayor of Addis Ababa City Administration, held on Thursday July 22 at Sheraton Addis, well known Ethiopian investors were involved particularly on the manufacturing industry have vowed almost 200 million birr to support the law enforcement mission at the northern part of Ethiopia.
Sources who attended the meeting told Capital that the meeting was accompanied by full of allure opinion and sensational mood.
On the meeting investors promised that they will continue to support the government’s effort to cut the current challenge that the country faces in northern Ethiopia. The law enforcement measure was commenced when the outlawed and former central government political dominant TPLF ignited firing onto the northern command of Ethiopian National Defense Force (ENDF) late November 3.
One of the participants stated the meeting was very emotional.
Sources said that prominent business leaders including Sheik Mohammed Hussein Al-Amoudi, Sabir Argaw, Getu Gelete, Belayneh Kinde, Buzayehu Tadele and others have pledged millions of birr to support the mission.
“They pledged huge amounts of money happily,” one of the businessman who attended the meeting told Capital, “I, myself have contributed millions of birr. It is national issue.”
“We have contributed this sum because everything shall run smoothly if the country is peaceful. We will continue our contribution for our country,” another manufacturer told Capital.
Some of the investors have contributed 10 and more in millions of birr at the initial stage while on the day the contribution of Sheik Mohammed Hussein Al-Amoudi was very big as he contributed 100 million birr.
Sources said that the initiative will continue on other sectors and may have another round call to support the nation to prevail its peace.
It was recalled that recently Lieutenant General Bacha Debele, one of the top leaders of the mission, and Adanech Abiebie, Deputy Mayor of Addis Ababa City Administration, met with Ethiopian investors from different sector to brief them about the recent central government decision that took unilateral cease fire to open space for farmers in Tigray region to manage their harvest in this rainy season and to smooth humanitarian operation.

Only 49 percent of businesses renew licenses in Addis Ababa

Could Cable Cars come to Addis?