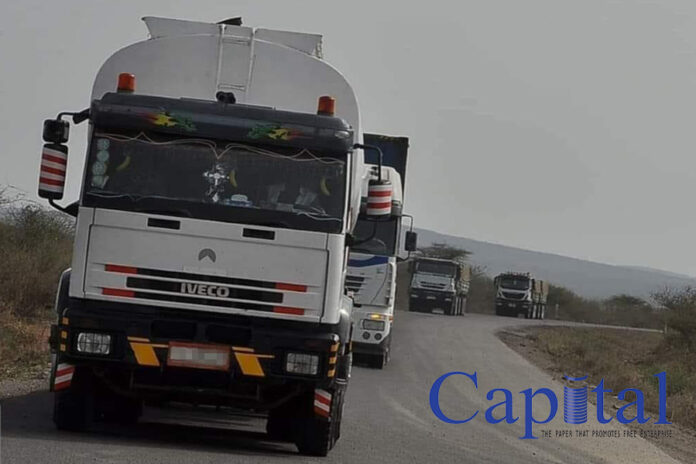 Two unforeseen incidents temporarily delay the flow of trucks that carried Ethiopian import cargos from Djibouti in the past one week, Capital learnt.
The information that Capital obtained from truck companies’ agents indicated that in the week, trucks have been stranded for days since the Djibouti Bureau of Ethiopian Customs Commission temporarily halted issuing a permit that required entering into Ethiopia.
One of the truck companies’ head told Capital that his company, which manage some of the trucks have faced delay for about four days due to the customs permit issue.
He said that it is a common occurrence for a delay of one or two days in Djibouti due to different reason that may not directly be related with customs issue, “But the current case is different and the delay has extended,” he expressed.
Agents told Capital that they have been informed by their representatives regarding the issues and was linked to the internet connection termination at the branch office.
Aliyi Abdella, Head of Djibouti Bureau of Ethiopian Customs Commission, confirmed the said problem had occurred in Djibouti which led trucks to be delayed for days.
Aliyi told Capital from Djibouti that the incident which transpired was unforeseen since the technical difficulty was in relation with the telecom service termination at his office.
“On Saturday March 13, in the afternoon, internet has been down for half day which has affected our activity but it was since then reconnected on Sunday,” he said.
According to Aliyi, he was informed by Djibouti Telecom that the problem had occurred on technical issues. “They know that our service is supposed to be active throughout the year for 24 hours a day but it was a technical problem that occurred on the internet connection to which they apologized for the interruption,” he said, adding that the problem extended for half day because the incident occurred on the weekend when some offices were not active when the incident transpired.
He declined for the rumor that the termination occurred in relation with unsettled bill. “Our telecom service is unlimited and the bill is paid at the beginning of the budget year for every year for the sake of uninterrupted operations on such kind of external issues,” he added.
The customs branch is open for 24 hours seven days a week to provide service for trucks that require getting a permit to transport the cargo to the country.
Mule Abdissa, Bureau Head of Ethiopian Customs Commission, told Capital another system interruption had occurred on Tuesday March 16 which affected the custom’s activity all over its branches.
“Tuesday’s incident occurred in relation to power interruption at the central network server of Ethiopian Customs Commission which affected the branches of the commission not only in Ethiopia but also in Djibouti,” Mule explained.
He said that the problem was resolved in the evening of the same day.
Aliyi has also given a confirmation that their activity in Tuesday had been affected because of the problem that occurred at the centre in Addis Ababa.
He said that his office in collaboration with Djibouti Customs is working day and night to accelerate the logistics activity and in transporting cargos to Ethiopia.
He reminded that meanwhile Friday and Saturday are a weekend at Ethiopia’s major logistics outlets; relevant logistics offices and ports in Djibouti are working in the weekends unlike other activities.
“Other regular offices like telecom may be closed on the weekend but the ports and other logistics offices are not closed all over the week,” he added.
According to the branch head, Djibouti Bureau is issuing a permit on average within five minutes time and drivers shall get service anytime in a day but mainly they are coming up to 10 p.m.
“From time to time we have accelerating our operations and up to 1,000 permits a day are given for cargos transported to Ethiopia,” he added.
Almost all of Ethiopian cargos loaded on vessels are transporting to the country via Djibouti that is connected on three roads networks and railway as well. Most of the ports in Djibouti are modern and some of them are recently built.