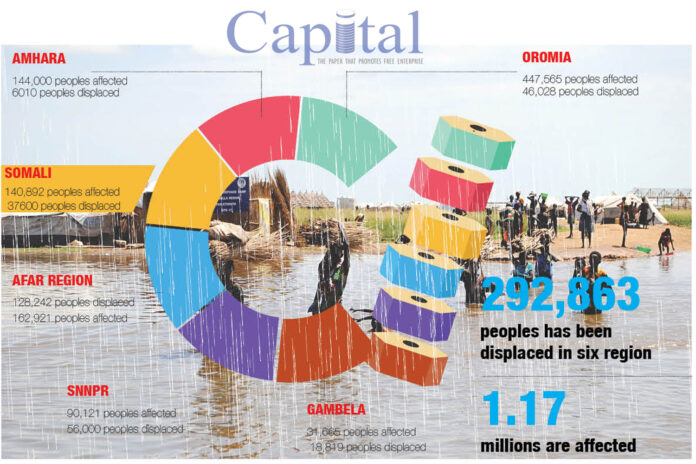 The heavy rainy season characterized by torrential rainfall and accidental floods has rendered suffering to 1.17 million people in six regions of the country.
According to the national disaster and risk management commission, the torrential rainfall that started in the middle of August displaced 292,863 people in six regions, and this ripple effect has gone on to affect 1.17 million people who are currently looking for aid.
In most cases, floods occur in the country as a result of prolonged heavy rainfall causing rivers to overflow and inundate areas along the river banks in lowland plains.
The backflow induced by Awash and Kesem rivers has resulted in accidental floods in the Oromia and Afar region, which is among the major river flood-prone areas lying along the upper, middle and down-stream plains of the Awash River. According to the commission, the flood has occurred in five woredas of Afar region, namely; Awash Fentale, Amibara, Dubecha, Gewane, Gelealo. About 128,242 people have been displaced and 162,921 people have been further affected in the Afar region. Furthermore, about 16,000 hectares of large farms in the two woredas are underwater.
In Oromia, three woredas, namely; Fentale, Merti, and Wenji weredas have caused 46,028 people to be displaced and an additional 447,565 people have been further affected.
Extensive floodplains surrounding Lake Tana and its major tributaries at times of heavy rainfall in Amhara region, East Gojam zone Fogera and Dembia woredas have also affected 144,000 people and an additional 6010 people have been displaced.
In Somali region more than 140,892 people have been affected, in which more than 37,600 people have been displaced courtesy of the overflow of Wabe Shebelle, Genale and Dawa Rivers
Moreover, in Gambela region, 31,665 people have been affected with 18,819 people being displaced.
Down-stream areas along the Omo and Bilate Rivers in the SNNPR region 90,121 people have been affected by floods with a further 56,000 people being displaced from their homes.
The general farming scene (Crops and animals) has also been tremendously affected in the areas.
According to Debebe Zewde Public Relations Director at the commission, so far there are no deaths reported from the flood. He continued to express that the government has been relocating the victims to safer places using helicopters and boats. “The government is trying to deliver food and nonfood aids including medical items, furthermore NGOs and individuals are chipping in to support the people,” said Debebe.
According to Debebe, starting from April the commission has been warning regions and risk prone areas based on the report of the national metrology and drainage development agency, however as he stated the heavy summer season has aggravated the situation. By definition, this type of flood is characterized by sudden onset with little lead time for early warnings and often results in considerable damage to lives, livelihoods and property.

The Role of Eurasia In The Global Economy