Currently there are more than a dozen private banks that under formation. From these banks one of them is Ahadu Bank. Tegabu Haileyesus Chairman of the Organizing Committee discussed with Capital how they are planning to enter the market and their strategy to successful years ahead. Excerpts;

Capital: Please tell us about Ahadu Bank and its organizers?
Tegabu Haileyesus: Ahadu Bank S.C. (Under Formation) is a conventional commercial bank to be established by Ethiopians and foreign nationals of Ethiopian decent. Complying with the country’s business law and National Bank of Ethiopia procedures, and comprising of a team of reputable professionals, veteran bankers and, prominent businessmen, have been gathered to make a foot print on the banking sector with a unique business model.
“AHADU BANK” coined its name from the “GE’EZ” alphabet which literally means “THE ONE” “THE FIRST.”

Capital: Considering the fact that it has been more than 100 years since the introduction of modern bank in Ethiopia, how do you see the overall growth of the sector?
Tegabu: The first bank in Ethiopia, the ‘Bank of Abyssinia”, was established in 1905 E.C. during the launch of the modernization effort of Ethiopia by King Menelik II. The banking business, in its long history, has seen a lot of development and changes since then. But the growth of the banking sector hasn’t been reflected by its age due to the varying financial policies that the country has been adopting in the wake of the prevailed ideologies.
Financial development in the banking sector can be measured by the growth of the financial institutions on annual scale, towards the financial market in terms of their accessibility, breadth of services and efficiency. To support the argument we can see the penetration as well as access to banks via the population size and coverage area. In both measurements it is an undeniable fact that there is growth or improvement, but as compared to where other countries have reached internationally as well as regionally Ethiopia has a long way to go and needs a very fast learning curve.
When we also see the technological usage in the sector, Ethiopia is still among the least in the world and also Africa according to studies by the World Bank.

Capital: What are the challenges and opportunities?
Tegabu: What I see as shortcomings of the banking sector are, undeveloped ICT infrastructure, poor customer service, low level of professionalism and integrity, not varying strategy, mixing ethnicity with the business which may affect corporate governance and the financial ecosystem not being designed for young people.
As opportunities: A steady economic growth, 110 M population, a big portion yet un-banked, with 75% productive youth, 2M Diaspora, 60+ Universities with more than 150,000 new graduates to get trained and get into the untapped business opportunities, Development of Industry parks, Increasing number of finance-starved small and medium enterprises, possible accession to WTO, signing of Africa free trade agreements are among those that are critical ones. However, in our views the opportunities outweigh the challenges in the sector and showing that there is still room for more banks.

Capital: As you see recently the formation of ethnicity and religion based banks are becoming common, do you think these kinds of formation can have positive advantage to the immature banking sector?
Tegabu: Yes it is seen that the private banks are having a formation base dominated by shareholders from certain ethnicities and recently religion. It is obvious that a country’s financial strength is based on the public financial capacity and consequently, these people are the investors in the banks to be established. However, it is human nature that, when people need to carry out any kind of team activity, they will primarily seek other people with similar shared ideals, status or from common origins to organize a company intended for a common goal, as the saying goes, “Birds of the same feather flock together.”
But you should keep in mind that the banks serve “ALL” and the deposit is made by “ALL” across the country, by all kind of nationality, race or religion. So the banks in effect do administer the wealth which belongs to the public at large and as a result they all are to be governed by the Country’s law of establishment and to be strictly controlled by National bank of Ethiopia.
Moreover, the share sales are to be floated to everybody with no discrimination allowing people from other sect to participate. We can see from those facts that it is only an issue of domination by certain section of the society during formation. It can be said harmful if only the bank exhibits discrimination in its business, customer or staff handling which is unethical. What is important is that the bank performs professionally to serve all equally and in a fair manner without losing its eye on the values and objectives of the very reason it is established for in the first place.

Capital: Do you think the emerging of new banks can make changes on the sector rather than strengthening the existing banks?
Tegabu: Ethiopian Banking industry is ranking low even in the East Africa region (5th out of 7) and IMF has put Ethiopia 142th in banking technology. Notwithstanding the modernization, it still has too much gap to fill in terms of the number of banks versus the population. The argument usually is the not-so-big bankable population which is the reflection of the economy. Ethiopia is doing great. Don’t get me wrong. As the future has a lot of bright promise in store for us we have to start now and get along with time.
So, yes the emerging of new banks may bring about positive changes by mobilizing domestic capital thereby enhancing public investment, be instrumental to increase hard currency through import/export business, create job opportunity, and contribute to the country’s growth by paying taxes.
When we see the issue of merger, the pros and cons of the objective itself should be carefully evaluated.
The main point should be the purpose of a merger if it is due to series incapacity to function at which stage those lagging behind may be doomed.

Capital: How can AHADU going to add value in the banking sector? And on what stage is the formation?
Tegabu: We believe having a harmonized environment is a key to a successful business through anchored positive cultural and societal values. And that is why our values start with having a shared vision among the families of AHADU who are Customers, Shareholders, Management, Employees and other stake holders. Having an unreserved service to all with a technology platform that has never been deployed through a competent staff that truly believes in the vision set we are planning to make changes using the Youth, vast manpower, the natural resources and the capital we mobilize in through unique products. AHADU will endeavor to use various mechanisms to best utilize the value added chain of agro processing for hard currency acquisition. 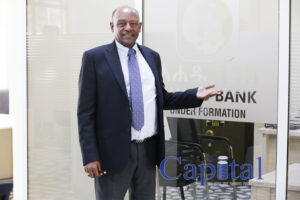 AHADU has been mobilizing shares in a pace that is beyond anyone’s expectation in this difficult time. Though the Covid- 19 crisis has slowed down the movement of people from place to place and has direct impact on the economic condition, we cannot disregard its impact on the mobilization of shares even further.
However, it has come to subscribe over 600 million Birr capital through over 6,000 Shareholders until now starting Ginbot 2012 E.C / May 2020/. It has planned to finalize the share sales until Meskere,m 30, 2012 E.C /October 10, 2020/ and proceed with licensing process assuming the state of emergency is lifted.
Parallels we are working on fulfilling the required studies, policies, procedures and manuals required as per NBE directive and other compliance requirements.
AHADU’s success will go farther and beyond gratifying profit to our shareholders. It is not just good earnings figures but in the contribution we will make to the development efforts i.e. in the number of youth we help get jobs, the public who have access to good quality life. It is when the community grows that AHADU will flourish as the public takes it as its own.
We are set to meet the future with flexible strategies, to get ready for the ever changing economic scenario like financial policies, inter-Africa trade zone and, incoming competitive foreign banks.
We have not made the business plan after we decided to open a bank just to have another bank. It is a gallant idea of the possibility to make changes with the youth if we can put our resources and wisdom into a concerted effort to do both profitability and getting out of poverty i.e., killing two birds with a single stone. This is ensued in the formation of AHADU BANK. This, I believe, is a very good chance not to be missed in joining this great bank.