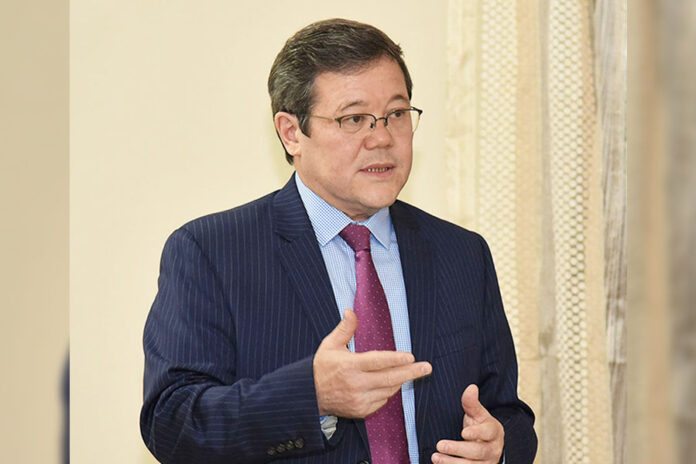 Kazakhstan is experiencing the heaviest unrest in its history recently. For a long time, Russia’s second most important ally in the post-Soviet realm was known as stable so what happened? Last week several hundred residents of Zhanaozen, an oil town in western Kazakhstan, took to the streets to protest high prices for liquefied petroleum gas, also known as autogas, a popular type of fuel. The protest wave has since spread across the entire country, with thousands joining street marches. Demonstrators have also taken to the streets of Almaty, the former capital. A presidential palace was torched. Capital sat down with Barlybay Sadykov Ambassador of Kazakhstan to Ethiopia to talk about the recent developments in Kazakhstan and what it means to the rest of the world. Excerpts;

Capital: How do you describe recent events in Kazakhstan?
Barlybay Sadykov: First of all, protests started in Western Kazakhstan were of an economic nature. It is important to note that there were no clashes between the police and civilians. The police did not use any force. All persons detained during unauthorized protests were released.
Unfortunately, peaceful demonstrations in Almaty, the biggest city of Kazakhstan, have been hijacked by terrorist groups and bandits seeking to undermine law and order in the country. Their criminal activities led to riots, robberies, rapes and mass violence. Almaty was attacked by almost 20 thousand armed groups and terrorists trained outside the country. They destroyed administrative buildings and military facilities, seized the airport and took foreign passenger and cargo planes hostage. This indicates a high level of readiness and coordination of the actions of criminals.
To deal with the national security threats, to protect countries’ sovereignty and integrity, protect people lives and property of citizens President Tokayev ordered to launch a counter-terrorism operation starting from January 6, 2022.

Capital: What was the main goal of the people involved in the unrest?
Barlybay Sadykov: We need to differentiate them. Those people how organized the riots in Kazakhstan are definitely terrorist groups. Their armed, coordinated and aimed to coup the State power by military means.
And we also know, that people peacefully participated in the protests are ordinary citizens. That is why all persons detained during unauthorized protests were released. The main goal of peaceful but unauthorised demonstrations, started on January 2, 2022, in the Mangystau region of western Kazakhstan was against the increase in retail prices of liquefied petroleum gas. The protesters demanded for prices to be reduced to the previous level, and requested a solution to some other socio-economic issues.
Following instructions from President Tokayev, the Government of the Republic of Kazakhstan promptly responded to the demands of the citizens and took measures to reduce gas prices, and imposed a moratorium on price increases for socially important food products, fuels and utilities.

Capital: It was said some of those arrested came from outside, who are those that are involved and where did they come from?
Barlybay Sadykov: The analysis of the situation showed that Kazakhstan was subjected to armed aggression by well-coordinated terrorist groups trained abroad. According to preliminary information, there are persons among the attackers who have experience of combat participation in «hot spots» on the side of radical Islamist groups. Currently, law enforcement agencies are investigating as part of a counter-terrorism operation, and all internal and external participants of the armed attack will be identified.
While the initial rallies in Western Kazakhstan were peaceful and accompanied by demands of a socio-economic nature, the participants in the subsequent mass riots did not put forward any specific economic or even political demands. They had no intention to negotiate with the authorities, and instead aimed at violently overthrowing the constitutional order.

Capital: How did the government not see this coming?
Barlybay Sadykov: Terrorist groups appeared due to the activation of the so-called «sleeping cells». Unfortunately, the law enforcement agencies of Kazakhstan were not ready for such massive and coordinated attacks in the different regions of the country simultaneously.
President Tokayev has instructed law enforcement agencies to form an investigative group to conduct a large-scale investigation and bring all those responsible to justice. The results of the investigation will be presented to the international community once ready.
At the same time, due to the sharp aggravation of the situation, President Tokayev assumed the post of Chairman of the Security Council of Kazakhstan, dissolved the Government and declared a state of emergency until the situation will be fully stabilized.
In this situation, Kazakhstan was compelled to seek help from the Collective Security Treaty Organization (CSTO), which has deployed a peacekeeping force totaling approximately 2,500 personnel to assist in the stabilization of the situation. The mandate of the peacekeepers included the guarding of strategic facilities and providing cover-up for Kazakhstan’s forces. It is important to note that the main combat operations against terrorist groups are conducted by the law enforcement agencies and armed forces of Kazakhstan.
Now the counter-terrorism operation is continuing in the country. The police, the National Guard and the Armed Forces are carrying out large-scale and coordinated actions to neutralize terrorist and criminal groups. However, peaceful protesters are not subjected to any persecution. Since situation is under control, on 13 January 2022 CSTO started withdrawing peacekeeping troops from Kazakhstan.
All that happened is a huge tragedy for us, the relatives of the victims and the entire Kazakh people.
It is important to emphasize the unity of the people of Kazakhstan at this difficult time. Citizens support the measures taken by President Tokayev to restore peace, and have established communal groups to protect social facilities.

Capital: What will the future hold?
Barlybay Sadykov: The large-scale counter-terrorist operation will be completed in the near future and there is a lot of work ahead and lessons to be learned from the tragic events.
After the New Prime Minister Alikhan Smailov has been appointed by Parliament on January 11, President of Kazakhstan, Kassym-Jomart Tokayev set a number of tasks for the reform of the country’s law enforcement agencies. All measures to reform and strengthen law enforcement agencies and the armed forces are aimed at protecting the population from external threats. To radically reform the law enforcement agencies, President gave instructions to increase the combat readiness and equipment of law enforcement agencies in general, and Special Forces in particular. The legal protection of the police will also be strengthened. In addition, President emphasized the importance of strengthening the border service and intensifying work to counter religious extremism.

Capital: Do you want to add something?
Barlybay Sadykov: The tragic events in our country highlight the problems of democracy and human rights in a new way. As stated by President Tokayev, only law and order can guarantee the wellbeing of all civilized states, including Kazakhstan.
As Almaty tragedy demonstrates, violence and anarchy, unlawful actions of criminals and terrorists not only undermine the security of civilians but also lead to violation of fundamental human rights.
Democracy is a work in progress and we continue learning from experience. We are defending our democracy and Constitution from Islamist radicals and terrorists. Kazakhstan remains committed to the protection of fundamental human rights and freedoms.
We have come a long way to building our state from scratch. And will do all it takes to protect our democracy and our people from any unlawful interference both at home and abroad.