Somali Region is in the path of marvelous changes since the political reform was introduced in the country some two years back. For this massive change the leadership of the region took the lion’s share. This new political administration in the region is led by MustefeMuhumed Omer, Deputy President of the Regions and one of the youngest and well accepted leaders in the country. Mustefe was exiled from his home country in 2007 fearing for his life. Because of his active political participation his family members including his youngest brother were killed and abused by security forces in the region. Before he came at the change leadership Mustefe was deputy head of UN mission at Abu Dhabi, UAE. Capital has sat down with the Deputy President of the region to talk about the changes in the region. Excerpts;

Capital: Since you came to the leadershipof Somali region what areas are you focusing and what did you achieve?

MustefeMuhumed: We received almost a failed region. So we have focused on reforming the government structure and the security apparatus in a way to be responsible for law and serve the public. To have a political stability we have facilitated dialogue in the society and others who have claims in the political space.

In the education sector in the past one year we have constructed 540 schools, which is very unique for the region and of these 77 are high schools. Since we came we were engaged in the development of 11 hospitals, of which three are new, expansion on five, and the rest are upgrading projects from lower health centers to hospitals. In the health sector 200 more ambulances are added that are crucial for the region that does have a poor road network. We hope it will improve maternal death.

Now we have allocated 2 billion birr for water projects relaying on the actual demand and focusing on towns.

Currently we are constructing over 1,000km gravel road in all over the region, and in the four main towns 24 km asphalt road is under construction.

In the job creation 200,000 new jobs have been created for the youth in the region. 35,000 of them are at the formal system of public offices.

Regarding agricultural development 13.8 million quintalswas harvested in the past season that is half of the demand for the region. In the agriculture sector the region will get more achievement but lack of technology barred to useus our full capacity. 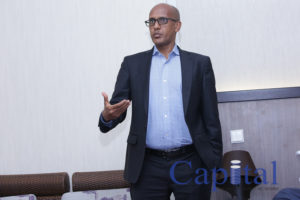 In agricultural mechanization to use our potential we are discussing with the federal government. For instance in relation with COVID 19 we have targeted to produce additional 166,000 quintals.

Capital: What are you doing to improve agricultural mechanization?

Capital: In what level is the federal government supporting you?

Capital: A delegation you led that includes Somali region elders was in Addis Ababa to express sorrow for the assassination of singer HachaluHundenssa. At the same time your region was not stable in the past. How do you see the situation in your region and what is your view about the current situation?

Mustefe: Peace in our region is restored. By the way in our region it might not be the assassination of high profile people like Hachalu to curb the political change process, but in the past two years there are sabotages in our region to create clan based conflicts and instability in towns. These sabotages more or less distracted the pace of our move in our development. Since our region is wide and share long boarders with Somalia some attacks were happening by external powers and those who want the region to be unstable. Those who oppose the current reform are focusing on our region but they will not win. We have strongly worked in the reform, in the security and the capacity of the security system so due to that excluding minor incidents they will be no more danger in the region.

Capital: There are claims that some part of elements that work for the former president of the region Abdi Ille are still active and even some of his network enabled to enter in your administration. At the same time the network of the core group in the former federal government pressured your administration. What is your comment?

The former federal government leaders, who were removed because of the reform, are engaged in propaganda war as if we are not from that society that we just came for the sake of others interest. Those, who were indirectly ruling the region by Abdi Ille to suppress the public in the past are now unable to go behind the reform. But we and the people in the region will continue on our development path. There is no power that will challenge the region. 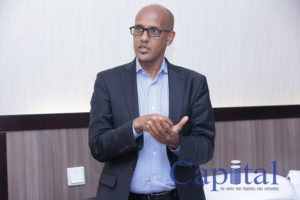 But before the reform the military leaders based in Harar had been doing whatever they want in Somali region. Those, who are now engaged on the allegation of the current federal government, have been assigned incapable and socially rejected individuals in the last 27 years to lead and terrorize the people and the region.

Capital: How is your government’s capacity to restore the region’s peace and abandoned the rampant corruption for the last three decades? How is the process of confiscating the property that was illegally accumulated by individuals?

Mustefe: Regarding corruption we are now focused on changing the attitude in the region. Confiscating properties that was illegally earned by regional political leaders and their chain is under process in collaboration with the Federal Attorney General. By chance most of the regional leaders, who abused the region’s resource are arrested and some disappeared from the country. The case is under legal processes.

We have given ourselves as an example to change the public in the region to fight corruption. In the past particularly in the last ten years before we came to power the word corruption is not known in the region, although it is endemic not only in the region but in the country. It was dangerous talking about corruption, even though the former regional president and his family abused the region’s resource.

For the past two years we have registered significant change in this regards. The regional auditor general report indicated that we are in good progress. Independent and strong regulatory bodies and leadership is crucial to get adequate result in the area. We are also working to create that. Now the region’s leadership will not tolerate a corrupt leader,and that is why we removed 7 cabinet members and about 40 woreda leaders that are now facing prosecution.

Detecting corruption fully may take time since strong leadership and institutions are required.

Giving public money for families and others that were common in the past have now been fully stopped, but improving the contract administration still has a gap. At the same time changes at lower staff is also expected to be done under the civil service reform.

Capital: Creating strong and developmental investors is one of the gaps in Somali region. What are you doing to change this?

Mustefe: The business community is responsible for working capital formation and use the opportunity to be investor not only in the region but as a nation.

As a government we are trying our best to leave the economy for the business community in the aim to separate the politics and economy that was a major challenge in the previous leadership.

In the past the government leaders controlled the political leadership and the business at the same time. Abdi Ille was engaged from bottled water business to khat trade, from dollar business to businesses like imported foods besides controlling public contract.

It has made the private sector incapable to come as a strong competitor, which is now free.

In the investment sector better environment is created and property right has now been recognized that will allow investors to invest in the region confidently. We are working with investors to invest in the region that has massive potential. The other point we raised is expanding access to finance that might be filled by forming a bank. If they form a bank they may fund their projects easily. Currently the region’s investors don’t have similar access like other investors because of religious issue and institutional systematic discrimination.

But now they have opportunities and we also seen some changes. For instance the construction industry, development of hotels and agricultural investment including green house based cash crop development is growing in the region and we are also creating friendly environment.

Capital: Regarding tax collection your region is expected to perform well. What is your performance in mobilizing the public revenue?

Mustefe: -previously the tax collection was very poor. At AbdiIlle’s time it was arbitrary that was imposed on very small business that supposed to be relived. But those that have relation with the government and have huge activity and laundering millions of birr were not taxed. We reviewed this.

In the 2018/19 budget year we have achieved 75 percent of the target and in the past budget year 3.8 billion birr was expected to be collected and the actual performance is 82 percent or 3.1 billion birr.

We have conducted an assessment in the tax collection and identified that there is a potential to earn more than five billion birr but capacity enhancement is needed to achieve it. For the current budget year the region has targeted to collect 4 billion birr. In the past two years we focused on regional security and stability now the tax area will be the other point, which is fuel to support regional developmental projects.

Capital: How is the interest of investors from other parts of the country?

Mustefe: We invited investors to invest mainly in the service sector. Besides that we have been working to facilitate a telethon to undertake organized campaign to attract investors, while the coming of corona virus forced us to hold it.  We expect investors’ engagement from other part of the country soon.