The Ethiopian Industrial Parks Development Corporation (IPDC) was established in 2014, as one of the public enterprises. Inspired by the full support of government, IPDC has become in recent years the engine of rapid industrialization that nurtures manufacturing industries, accelerating economic transformation through promoting and attracting both domestic and international investors.
Challenges owing to the country’s current situation have led to some of the parks located in the northern parts to face significant damage and destruction which has affected operation to some extent with termination of the Africa Growth Opportunity Act adding salt to injury.
Capital caught up with Sandokan Debebe, Chief Executive Officer of IPDC, for an inside look of the challenges, way forwards and initiatives being pulled by the corporation to ensure smooth operation resumes. Excerpts;

Capital: What is the severity of the damage?
Sandokan: It is too early to tell the estimation but the terrorist group has committed robbery and caused damage in the park.
Certain facilities and infrastructures in the park were almost completely looted, a variety of product companies which produce both raw materials and finished materials were completely vandalized with both materials looted.
A good example of these significant damages is of Carvoco Company- a firm that invests more than 90 million euros in the textile industry which has suffered the extensive damages and looting following these events. We will officially announce the weight of these damages after finalizing our comprehensive analysis on the situation.

Capital: What initiatives are you doing as a corporation to get them back to operation?
Sandokan: Apart from assessing the damages we are working round the clock to resume full operation. Investors on their end are also eager to resume manufacturing as it was before. Furthermore they have asked the government to support them and we are working on this end with the different stakeholders to rehabilitate the parks within a short time.
Currently, more than 80 percent of services are back to operation which will enable us to start basic operations.
Also the terrorist group has destroyed all governmental offices in the park including banks, and we are working to rehabilitate them.
Additionally, investors are also working to export some products which are intact remains from the destruction caused by the terrorist group. In this one month window period, we look forward to have full re- operation of the parks.

Capital: How is your communication links with investors? Are there any investors who have made a claim for compensation?
Sandokan: For the time being the damage that is being assessed is on Kombolcha industrial park since there is no information about Mekele. Moreover, investors on their part are assessing the damage on their own company.
As a corporation we have the fundamental principle of giving support more so to investors who believe in the government and its people. Thus it should not be a matter of claiming compensation but rather the act of providing support in this crucial time.
When the companies carry out their assessment we will work towards authenticating the results and we will look into the best options of supporting them. 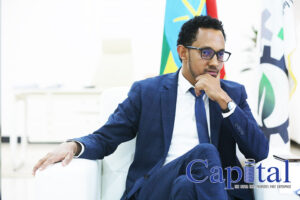 Capital: Regarding Ethiopia’s termination from the Africa Growth Opportunity Act /AGOA/, what are the initiatives you are putting in place to minimize the impact of the country’s departure? What was the reaction of beneficiary investors?
Sandokan: AGOA is a risk we take voluntarily. We have 13 industrial parks over the country and 10 of them are specialized on the textile and garment sector. Through process and time we have been able to reel in improvements from using the free trade chance. As seen in figures from 2016, Ethiopia’s export through AGOA was less than 13 percent but from the latest data the figure reached to 70 percent, showing wide margins in use of the opportunity act.
About 35 anchor companies in industrial parks are engaged in the garment and textile sector of which about 80 percent of their products are exported to the US market using the AGOA scheme and the termination of the act will have an adverse effect on them.
Here investors will have two options, which is finding optional markets or staying competitive in the US market buy paying tariffs and duty. So what the government is trying to do is identify certain options for investors to stay competitive, such as law improvements, structural and system improvements and minimizing bureaucratic system, subsidy, and some other interventions. Therefore there is a long detailed list of interventions by the government which different stakeholders have also set. Thus the macroeconomics’ team is working to harmonize them together and in a few weeks’ time we will get to hear of the decisions that have been made.
Regarding the reaction of investors following the termination of the act, of course panic is naturally expected since they are highly reliant on the scheme but the instability of the country bothers the investors more than AGOA.
In a stable and peaceful environment companies can work by their full capacity which helps them to find alternative markets and can minimize the effect of the AGOA termination.
The other thing is ensuring product diversity in industrial parks, encouraging other relevant investments in specialized industrial parks for mixed use.
Diversity help us in finding new and alternative markets, such as the Chinese government which recently announced that it has plans to source about 300 billion dollar worth of agro processing products from developing country such Ethiopia. So to be a beneficiary from such schemes we have to turn our faces, and stay positive.

Capital: Describe to us the last five months performance of IPDC as well as the overall 10-year plan of IPDC?
Sandokan: The last five months performances of industrial parks were very remarkable and better overall in comparison to the same period last year.
Of course there were lots of challenges mainly stemming from instability and also termination of AGOA amongst the pressure of surpassing our set targets. During this period, companies were working aggressively to use the AGOA scheme before its termination.
With regards to our 10-year plan, its strategic targets have been stretched to 8 goals, including; employment opportunity, increasing export, import substitution, market linkage, and technology transfer and so on.
For example in terms of employment opportunity, we are planning to create 700,000 direct employment opportunities in parks which are now about 85,000. Regarding export earnings at the end of the ten year period Ethiopia should earn 19 billion dollars from industrial parks.
The other core element is ensuring financial viability of the corporation and making it a world class industrial park operator and developer.
When looking into increasing the number of Industrial parks, last year we have done research to identify locations and capacity enablers to industrial parks in Ethiopia to which we found that the country has a capacity to build 107 various kinds of industrial parks within 20 years. So in our ten years plan we are planning to build 6 more industrial parks.