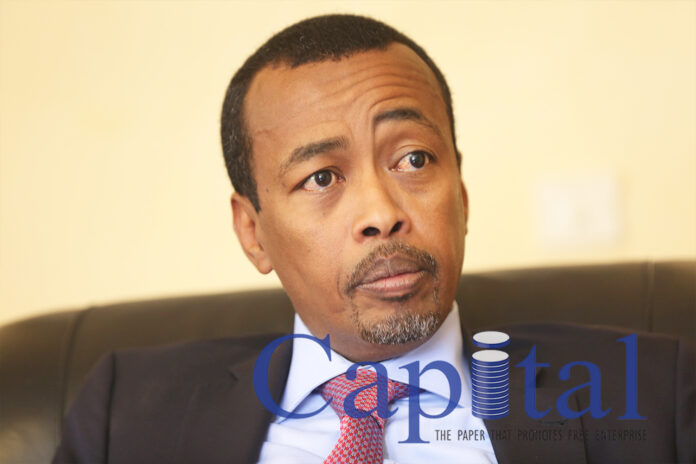 The government of Djibouti closed its land, air and sea borders on March 18, 2020 following the rapid spread of the corona virus in Africa. Djibouti is one of the first to close its boarders and announce general lockdown except for some essential administrative and port related services sanctioned by the government.
Djibouti Ambassador to Ethiopia Mohamed Idriss Farah talked to Capital about the situation in Djibouti and what his government is doing to tackle the pandemic as well as what strategies are put in place to ensure the smooth transfer of goods between the two countries in this uncertain times. Excerpts;

Capital: How is Djibouti coping with COVID 19 pandemic? What are the challenges and the response from your government?
Amb. Mohamed Idriss Farah: The government of Djibouti quickly made an important decision to close its land, air and sea borders on March 18, 2020 followed by general containment of the population in order to fight this pandemic. Our strategy also consists in carrying out a nationwide screening of the population in order to quickly detect those infected by COVID 19 and immediately take care of them to avoid loss of human life. This is the reason why several thousand Djiboutians and foreigners living in Djibouti are screened and will continue to be screened in the days and weeks to come.

Capital: Your country is repatriating Ethiopian migrants back, what are the reasons and why at this time?
Mohamed Idriss: The Ethiopian migrants living in Djibouti are migrants who came wanting to go to Yemen, and because of the closure of the maritime borders of the Arab countries they are stranded in Djibouti. They wish to return home to Ethiopia, and this issue of voluntary return of Ethiopians is directly managed by the International Organization for Migration (IOM) and they are therefore awaiting repatriation in complete agreement with the Ethiopian authorities.
Indeed, despite the closure of land and sea borders, migrants have never stopped coming to Djibouti in the hope of reaching the other side of the Red Sea. Some of them want to return to Ethiopia and others want to stay in Djibouti.

Capital: How is the Port of Djibouti operating in these difficult times?
Mohamed Idriss: The activities of the ports of Djibouti operate normally and practically at the same rate as before the pandemic. The number of trucks entering and leaving our ports is the same as before the crisis. This demonstrates the total commitment of Djiboutian ports actors, in the remarkable work done despite the risks associated with COVID 19, to ensure that Ethiopia does not have any repercussions on its import both in terms of oil as well as any goods dispatched to this friendly country. 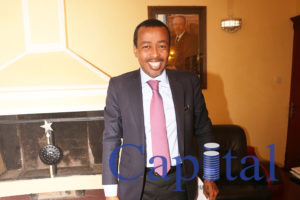 Capital: What are the preparations undertaken at the port of Djibouti to prevent the pandemics?
Mohamed Idriss: The Djibouti Ports and Free Zones Authority (DPFZA) has implemented a number of health protections to operate normally, that is the implementation of the measures recommended by the World Health Organization (WHO) so as to limit as much as possible the risk of COVID 19 spreading.
Furthermore, the activities of the ports and free zones of Djibouti were not impacted by the general lock down adopted by the government, in particular to ensure that Ethiopia is not to be affected in any way by our quest to protect our population from COVID 19.

Capital: Your country recently reported the first corona virus death and the number of positive tests soars rapidly. What is the worst case scenario that will inflict on your economy.
Mohamed Idriss: The impact on the Djiboutian economy will be real just as the whole world’s economy. This health crisis will unfortunately be followed by an unprecedented financial and economic crisis for the world economy but especially for the economies of developing countries, and in particular the African continent.

Capital: Recently there were reports that Djibouti banned a food cargo bound to Ethiopia. What really happened?
Mohamed Idriss: It is completely false to claim that Djibouti has stopped the supply of food to Ethiopia. This information is slanderous and unacceptable for our country because it is disseminated in social networks by malicious people. There has never been any question in Djibouti of blocking any goods belonging to and going to Ethiopia.
I also emphasize that despite the general lockdown of the population and the interruption of all commercial and economic activity, the President of the Republic Ismael Omar Guelleh has given clear instructions to the government that port activities and trans-shipment of goods are in no way affected, in particular to ensure that Ethiopia’s supplies are delivered on time. Over 1,200 Ethiopian truckers cross our borders every day to gain access to the various ports of Djibouti to supply Ethiopia despite this severe pandemic of the corona virus. This demonstrates, if need be, the total commitment of the Djiboutian authorities to satisfy the Ethiopian market.
In addition, a joint committee co-chaired by the Ethiopian Deputy Minister of Transport and the President of Djibouti Ports and Free Zones Authority is set up within the framework of COVID 19 to ensure that there is no supply delivery interruption on the one hand, but also to limit the risk of the pandemic spreading.
Meanwhile, the Djiboutian authorities have asked local importers to plan a strategic three months stock of essential products. This does not affect Ethiopia’s supplies but rather concerns the local Djiboutian market because of the risk of economic slowdown which could impact the Djiboutian national market. 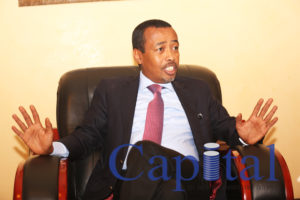 This decision by the government to provide for a strategic stock of basic necessities does not affect Ethiopian importers. Consequently, there is nothing strange in the decision of the government of Djibouti to sanction the establishment of a three months strategic stock in these uncertain times with the supply of essential products by Djiboutian importers to think of their compatriots.
To this end, the Ministry of Foreign Affairs and International Cooperation in Djibouti has made an official statement in order to clarify the situation and reassure the citizens of our two countries.

Capital: Any final comment?
Mohamed Idriss: I would like to take this opportunity to acknowledge the role played by the Ethiopian Embassy in Djibouti in collaboration with the Ministry of Foreign Affairs to clarify these false statements circulating on social networks.
The multidimensional relations between our two countries remain excellent, based on mutual respect that can even be considered as an example in terms of economic integration in Africa.