Ethiopian Airlines has started services to Chicago as of June 10, 2018.
The inaugural flight to Chicago was announced at a colorful ceremony held in the presence of US Ambassador to Ethiopia, Michael Raynor, members of the diplomatic corps, Ethiopian executive management members, and invited guests.
Group CEO of Ethiopian, Tewolde GebreMariam said “The flight will further boost the growing economic and people-to-people relations between the U.S. and Africa in general and Ethiopia in particular by enabling greater flow of trade, investment and tourism,”
Ambassador Raynor, for his part said, “The US Government and the American Embassy in Addis Ababa will continue to support the growth of the airline.”
Chicago is Ethiopian fourth destination in the U.S. and the seventh in the Americas.

75 years after Auschwitz – UN honors memory of the victims...

A TALE OF THREE SUMMITS 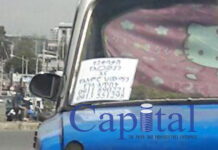