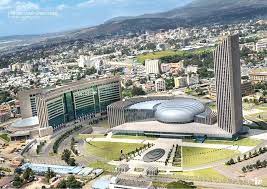 Westin Hotels and Resorts takes over the management of the new African Union Grand Hotel with an agreement being signed with Midroc Ethiopia PLC on Friday November 12, 2021.
Officials from Midroc Ethiopia PLC inked a deal with Marriott International for the African Union Grand Hotel located adjacent the African Union headquarters in Addis Ababa to operate under its Westin Hotel brand. Starting from 2012 Westin Hotels and Resorts has been negotiating with MIDROC Ethiopia to manage the hotel when the hotel was still under construction in the compound of the headquarters of the African Union.
Jamal Ahmed, CEO of Midroc Investment Group and Yasin Munshi, Director of Lodging Development East Africa for Marriott International signed the deal.
“As we build on our long-term relationship with Marriott International, we look forward to bringing the Westin brand to Ethiopia,” remarked Jamal Ahmed, CEO of Midroc Investment Group.
Yasin Munshi, Director of Lodging Development – East Africa for Marriott International commented, “we are delighted to strengthen our relationship with Midroc Ethiopia and further enhance our footprint in Ethiopia with this landmark project.”
The Hotel was expected to launch operations staring from 2013 during the 50th anniversary of the African Union.
The hotel which has 14 stories is located in the premises of the African Union head quarter. The speed of the construction project was as a result of a loan grant of 850 million birr, by the Commercial Bank of Ethiopia. The total expense of the construction of the hotel is estimated to be about 1.2 billion birr.
The design of the hotel calls for a complex, multipurpose and standard construction that is designed for presidents, diplomats and business travelers. It is expected to include meeting rooms, suites, swimming pool and spa, restaurants and bar, grand club, multipurpose ballroom, business center and parking.
Westin Hotels and Resorts brand which will take over is an international hotel brand and an American upscale hotel chain owned by Marriott International, part of Starwood’s Hotels and Resorts Worldwide since it was acquired by Starwood in 1994. Recently Westin has focused on expanding global market, owning 250 locations in 40 countries over the world.
Marriot International has also the management of Sheraton Addis hotel with its most global brand within the Marriot portfolio which also is owned by Midroc Ethiopia.