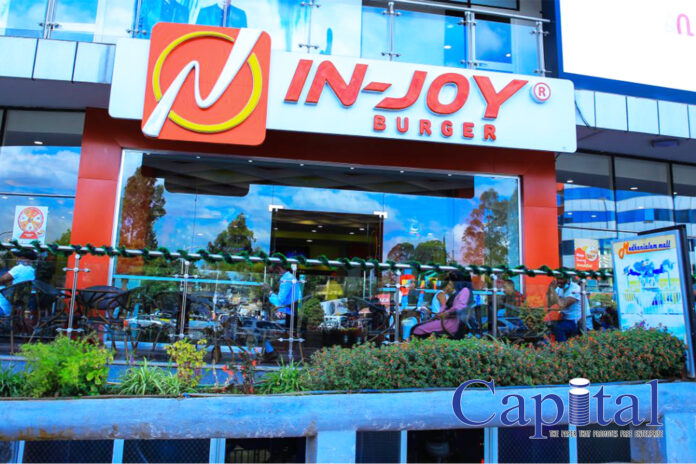 Continues to cost the country

Yet another Ethiopian company which used the trademark of In-N-Out Burger has lost the legal battle in its dispute with the US Company over its trademark. However, Molalign Melese, Lawyer of In-Joy said the verdict of the High Court is not fair and added that the case was not about the trademark.
In December 2014, the US fast food chain In-N-Out Burger had filed a charge on the Ethiopian company, which recently changed its trademark to In-Joy Burger, on the claim that the Ethiopian company is using its brand illegally.
After a six year battle, the Federal High Court Ledeta Civil Bench has given a verdict in favor of the US Company which has operated the business and trademark since 1948.
“As per the country law we were using a trade name that we got a certificate from Ministry of Trade and Industry, which is our legal right,” Molalign argued.
“We did not use the trademark of another company, meanwhile in the middle of legal battle the company issued a trademark that is registered at IPO,” Molalign says and reminded that the trade name has also been changed recently.
“The international company did not file the charge in relation with trade name so the decision of the court is not acceptable and the fine of 150,000 birr is not appropriate. Due to these two reasons we will appeal for the case,” he told Capital.
According to the information Capital obtained, the US company trademark has been registered at Intellectual Property Office (IPO) in 2011, while the Ethiopian company claimed that it registered the trade name at Ministry of Trade and Industry. However the Ethiopian company revoked its trade name and changed it to In-Joy recently before the delayed final verdict come out this Thursday December 31, 2020.
The local company has also been fined for using the brand without the permission of the trademark owner.
It is not the first case for Ethiopian companies to lose their legal battle in this regard. In the past couple of years, Intercontinental Hotel of the US brand had defeated two Ethiopian hospitality firms for sharing its hotels brands.
Regarding In-N-Out the American franchise lawyers have approached the Ethiopian business operator to change before the case is pushed to legal process. However, the Ethiopian company which had a business license from Ministry of Trade did not come up with expected response until recently.
The Ethiopian company that has got well acceptance in the market and expanded its chains in different corners of the city changed its name to ‘In-Joy’ mid 2020 after a ten year operation with the former disputed name.
At the time, it has been reported that one of the reasons to change the name was that there is another international brand on the same trademark and that would create dispute and will be a challenge for the expanding business of the Ethiopian company that also targets to expand its shops in the region besides the country.
Experts in the legal sector said that Ethiopian’s are not alert on the issue that costs the country besides them, while these days there are improvements.
For instance, the trademark that was registered at IPO by foreigners about two years ago was over 11,000 but Ethiopian companies’ trademark that was registered would not reach a quarter of the foreign companies.
“This shows how Ethiopian businesses are not vigilant for trademarks while due to recent aggressive advocacy operation it is improving,” a legal expert on the sector told Capital.
“Our market importance is very immature for instance in Kenya over 150,000 trademarks are registered; even when it comes to Ethiopia trademarks from Kenyans or Tanzanians are registered in here,” the legal expert added.
The expert recommended the trade bureau or Ministry of Trade and Industry to work jointly with IPO on the registration of trade names and trademarks, otherwise the problem will continue in the future and will direly affect the economy and the country. He reminded that the way to join World Trade Organization (WTO) would also come up with another crisis for Ethiopian businesses that are functioning foreign trade names and trademarks.
He advised local businesses to focus on improving their operation and services besides crafting genuine brands than using other brands for their businesses.
Most notably private banks in the name of rebranding are spending millions of birr on their brands that are copied from foreign sources.