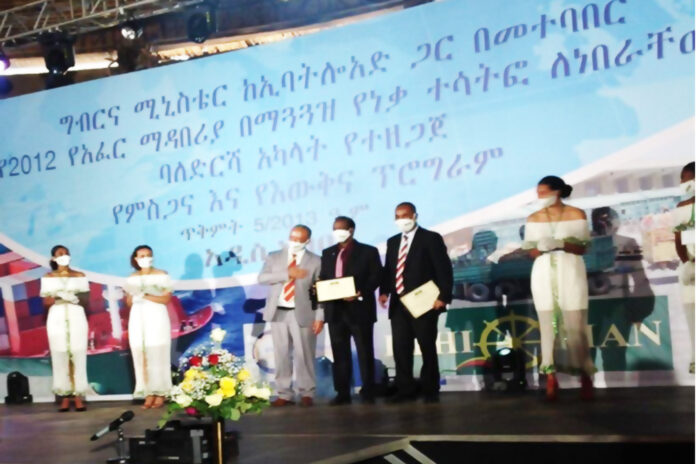 By our staff reporter

Doraleh Multipurpose Port (DMP)/Port of Djibouti SA (PDSA) received recognition from Ethiopian Shipping and Logistics Services Enterprise (ESLSE) for its performance on handling agricultural input and deliver it on time for farmers in Ethiopia.

On a ceremony held on October 15 in Addis Ababa, ESLSE has awarded a certificate of recognition for the port’s numerous performances at the end of the 2019/20 budget year that DMP/PDSA achieved.

During the ceremony Roba Megerssa, CEO of ESLSE, presented a certificate of merit to Djama Ibrahim Darar, Director General of Ports PDSA /DMP in the presence of the President of the Ports and Free Zones Authority Aboubakar Omah Hadi, Minister of Finance Ahmed Shide, Minister of Agriculture Omer Hussein, officials from Ministry of Transport and all the main players in the logistics chain, transit companies, carriers, banks and other. 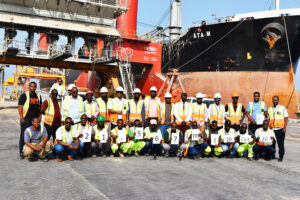 “Indeed, DMP, an essential link in the transit of bulk goods, has made it possible to deliver strategic products intended for Ethiopian farmers on time, with a record of 20,000 metric tons of products unloaded per day and per ship,” the port facility states.

The strategic product mainly fertilizer reached farmers before the beginning of the past agriculture period with tuff and combined effort of ports in Djibouti and Ethiopian side.

DMP, which also connected with the electric railway system that stretched up to the heart of Ethiopia, is the modern ever multipurpose port in the region with massive capacity of port handling.

The day after the ESL certificate was handed over, the Commercial Director Ms Habon Abdourahman has reported again a new milestone of a new discharge of bulk cargo from a WFP vessel called MV ATA-M. The Port recorded a new record performance, unmatched in our entire region, estimated at 21,567 mt in 24 hours.

According to the information Capital obtained from DMP, on October 16 the port managed to unload a bulk cargo of wheat with record performance per day.

“Indeed this complex, recorded a new record of unloading of 21, 567 metric tons of wheat in one day from a vessel chartered by WFP MV ATA-M transporting 40,000 metric tons of bulk wheat,” the statement said.

The unloading fully accomplished within two and half days from the vessel due to fast operation conducted with record performance, according DMP information.

“This performance obviously demonstrates the will of the management of this complex operation, combined with the efforts of the managerial and an operational team of DMP / PDSA,” the operator says adding, “the DMP/PDSA port platform continues to increase its dynamism in the logistics and transport sector.” 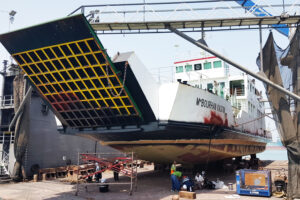 According to the information that the port sent to Capital, similar fast operation will be undertaken for other coming vessels with bulk cargo.

In related development the PDSA port equipped with the latest generation floating dock with a lifting capacity of 1,750 tons provides upkeep and maintenance for boats in Djibouti but also in the region.

To this end, the engineers of the Marine Services Department Directorate have finalized the maintenance work on the main ferry Mohamed Bourhan Kassim by refurbishing the submerged structure of the ferry to resume its activities in complete safety.

During the Covid-19 period the boat was stationary and had not sailed for several months, now because of the advanced services of the PDSA, the vessel flying the Djiboutian flag resumes the crossing of the Gulf and ensure the movement of goods and people in all serenity.

The Port of Djibouti has implemented an aggressive marketing strategy aimed at becoming the center of excellence in terms of ship repair in the region. In this regard, PDSA, constantly selling its marine services to the countries of the region, dispatched to the Port of Mogadishu, from October 11 to 15, 2020, a team of engineers from Maritime Service Department composed of electricians, mechanics and welders specializing in marine structures for a technical diagnosis of their naval equipment.

This important visit resulted in an agreement in principle on technical assistance in accordance with the win-win strategy and a request for immediate repair of three of their tugs.

The French navy is also convinced of the expertise and professionalism of the PDSA in terms of naval repair, has now partnered and benefited since the beginning of October 2020 from a refurbishment of their main landing building.

The future of telecom