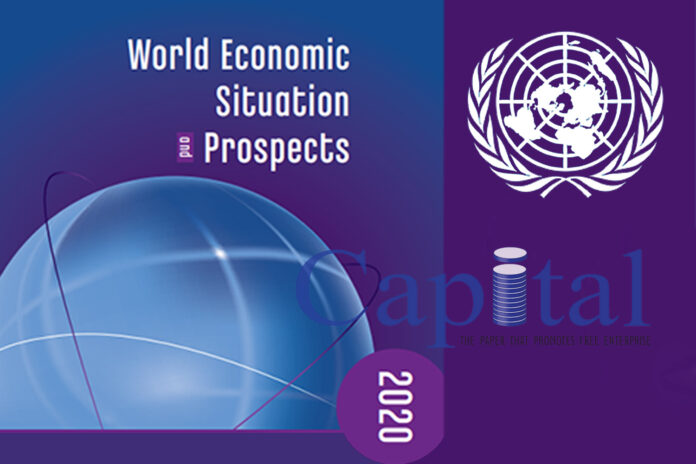 A report made by the United Nations’ Department of Economic and Social Affairs predicted that Ethiopia’s economic growth looks promising in the coming two years. The 2020 report titled ‘The World Economic Situation and Prospects’ serves as a tool that explores and explains global economic trends and transitions of the given year. The annual report was released on Thursday, January 16th 2020.

Zooming into Ethiopia, the report showed that economic growth for the East African country is predicted to surpass 7.0% in 2020 and 2021 due to an increase in “private investment, robust public investment and growing business confidence.” On the other hand, setbacks in Ethiopia’s economic growth include a low level of foreign reserves and currency shortages. High levels of debt and an elevated current account deficit are also contributing factors.

While a slight hike in worldwide economic activity is predicted for 2020, the overarching theme of the report showed that global economic development has been monotonous with a decline seen in most parts of the world.

The global economy endured its lowest growth in a decade at 2.3 percent in 2019, at the cornerstone of this decline are continuing global trade disputes, the report stated. 2020 could see growth of 2.5 percent if risks are curtailed, alternatively, the opposite end of that scenario could bring forth a decline to 1.8 percent in 2020.  According to the report, the overall decline is a result of several roadblocks, namely trade disputes, policy uncertainty, geopolitical tensions, the climate crisis, food insecurity and poverty.

“These risks could inflict severe and long-lasting damage on development prospects. They also threaten to encourage a further rise in inward-looking policies, at a point when global cooperation is paramount,” said UN Secretary-General António Guterres in the report.

A magnified look into Africa showed that while GDP growth has seen a slight increase, it does not meet the development needs of most sub regions. Mirroring the insufficient progress is the GDP per capita, which has remained stagnant over the last decade, the report stated.  Extreme poverty continues to be the Achilles heel of African countries as the Democratic Republic of Congo, Ethiopia and Nigeria sit among the five countries in world with largest populations living in poverty. Eradicating this issue calls for a “substantial acceleration in economic growth” the report further stated.

The glimmer of hope for Africa is found in East and North Africa with both sub regions showing signs of improvement and growth, the former being the fastest growing sub region in the content. The Horn of Africa’s recent peace deal signed between Ethiopia, Eritrea, Djibouti and Somalia is one of the contributing factors to East Africa’s rise. The deal is said to open the door for new investment, trade and business promotions.

Consistently in the lead are countries in East Asia, as the region remains the world’s fastest growing region. The United States is experiencing a lull as GDP is predicted to decrease from 2.2 percent in 2019 to 1.7 percent in 2020. The European Union will see a “modest growth in GDP from 1.4% in 2019 to 1.6% in 2020.”

“Amid growing discontent over a lack of inclusive growth, calls for change are widespread across the globe. Much greater attention needs to be paid to the distributional and environmental implications of policy measures,” said Elliott Harris, UN Chief Economist and Assistant Secretary-General for Economic Development.

The report concluded that 1 in 5 countries will see a stagnation or decline as a result of the aforementioned setbacks for economic growth.