The second telecom license bid document may also be issued with some crucial policy revision of the government with the consideration of independent infrastructure investment and mobile money.

The investment teaser released in association with MoF’s announcement for expression of interest (EOI) for the 40 percent share acquisition at Ethio Telecom, the century and quarter telecom monopoly, stated that the enterprise’s total equity and liabilities is over 79.8 billion birr.

“Business valuation that includes the turnover of the company, services and their value and the total generation in the coming years is critical rather than total asset to measure the value of a company,” one of the sector actor closely following the partial privatization process told Capital. 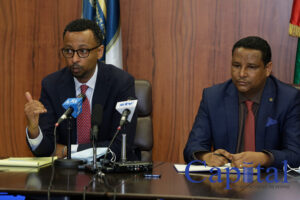 It explained that from the balance sheet the mobile network equipment is the largest non-current asset class constituting 42 percent of property, plant and equipment as at 31 December 2020.

Ethio Telecom has over 7,400 tower sites (700 plus sites in Addis Ababa); of which 96 percent are greenfield towers and remaining are rooftop towers with the length ranging from 2 metres to 102 metres and an average height of 36 metres, while it has 7,777 real estate properties.  It has over 21,000 km of fibre network spread across Ethiopia and about 85 percent is buried.

The bulk of the non-current liabilities related to promissory notes, which pertained to vendor financing agreements that Ethio Telecom has with its suppliers for the telecom expansion project (TEP) and next generation projects.

The TEP is mainly involved on improving network service quality, increasing coverage and capacity on mobile service through purchase of high-speed fibre optic capacity and increased networks maintenance. It added that Ethio Telecom was in a positive net asset position throughout the analysis period.

The investment teaser indicated that as of April 2021, Ethiopia’s telecom sector was largely characterized by low tele-density and mobile penetration (53.5 percent and more than 50 percent, respectively) compared to 90 and plus percent in major African economies, and low mobile broadband penetration rate (3G and 4G subscribers accounted for 46 percent of total mobile subscriptions, and 4G penetration rate stands at a mere 2.6 percent).

“The low tele-density, mobile and internet penetration offer a huge untapped potential for the telecom investors,” it explained.

It is to be recalled that Ethio Telecom hired KPMG East Africa, asset valuation of the enterprise, to conduct its business valuation.

Experts in telecom sector explained that matching of the two consulting firms’ valuation may indicate the common value.

The telecom giant with 127 years of experience which has registered over 28.4 billion birr revenue in the first half of the current business year is the most profitable public enterprise.

Early last week MoF issued EOI that interested stake buyers on Ethio Telecom to submit its proposal up until 14 July 2021.

The government has decided to sale 40 percent of Ethio Telecom state to interested international buyer on the way to privatization besides opening up the sector for two more players.

The consortium of Vodafone Group, has already secured the license on the initial liberalization bid, while the second bid is expected to be retendered.

Brook Taye, Senior Advisor at MoF, said that the government will undertake some policy revision for the retendering of the second license. The policy revision is expected to open up some of the sectors that was closed or left for Ethio Telecom in the previous bid.

Brook preferred to state the change as government policy revision than taking areas in detail but hinted that the mobile money policy is one of the changes.

However, experts confirmed that the government will also allow to opening up the sector for infrastructure developers to invest in the country.

On the first bidding process on the consultations potential companies have been insisted the government to allow infrastructure developer to invest in the country, while the initial stage the government had targeted to open the market for such companies but later it decided to suspend the plan for unspecific period.

Closing the mobile money service and companies on infrastructure investment was stated as one of the factor since the government was unable to get the offer as per its estimation of USD one billion for a single license.

The government was paid USD 850 million by Vodafone’s consortium for the first license.