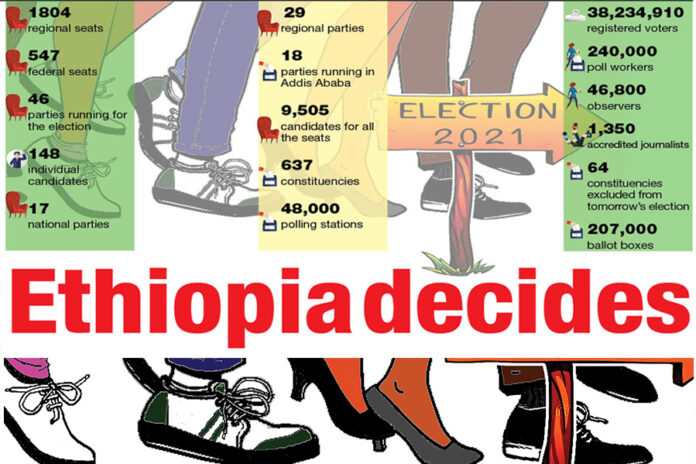 The National Electoral Board of Ethiopia has said there is no fear of security in the first schedule of the sixth general election which will be held tomorrow Monday June 21, 2021.
The board vow to hold fair, credible, and free election however there is still widespread apprehension among the public, given the jarring electoral violence in the country which has been witnessed in the past.
General elections were supposed to be held in Ethiopia on the 29th of August 2020 but were delayed, supposedly due to the pandemic. In May the house of people’s representatives had voted to postpone the election to 2021.
After six years of power the house of representative has opened the door to the National Electoral Board of Ethiopia to take over the stage for the preparation of the six general elections, which both Federal and regional council elections will be held at the same time all over the country.
In late December 2020, the National Electoral Board of Ethiopia had stated that the sixth general elections would take place on 5 June 2021, however just a month ago after discussing with political parties, the election board had announced a new date for the long-waited election to be haled on Monday June 21, 2021. The new delay was needed because of logistical woes related to tasks like training electoral staff and printing and distributing ballot papers.
The logistical challenges have been a great factor in this election which have caused delays alongside other factors such as staff shortages. Places where voter registration has not started, due to security concerns, locations where voter registration has begun and been terminated, areas where complaints have been lodged during the voter registration process or where the board has decided to investigate a significant irregularity in the voter registration process, are some of the hurdles that NEBE has had to endure to provide a credible election.
Throughout the year the election board which is led by former politician Birtukan Mideksa has experienced lots of blocks. Beside the pandemic, the board has been tensioned by the national security and instability. Through the year several parts of the country have been undergoing instability, including the conflict in Tigray region.
The election is roofed by various insecurity and logistic distresses, error in the ballot papers threatened the twice delayed national poll officials but amidst all these, the government still speculate that, this will be the most credible vote in Ethiopian history.
According to Soliana Shimes, communication advisor of NEBE, the board has expressed no fear of security on the voting date. “As we have excluded the conflict areas from the first schedule of the election, there is no fear of security and the board is not concerned on the first scheduled election,” explained the advisor.
With currently almost 15 percent of constituencies unable to participate in the June 21 elections due to insecurity and other challenges, 40 constituencies were said elections cannot take place due to security reasons and voters’ registration irregularities.
According to the election board there are 673 constituencies all over the country. The 6th general election will be held at all of the constituencies in Addis Ababa, Diredewa, Gambela region and Sidama region. 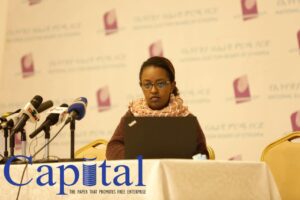 Where it is not safe are in parts of western and southern Oromia, which are racked by armed insurgency. Fierce fighting in these places, as well as in the neighboring region of Benishangul-Gumuz, and Amhara Region has stopped the voting process scheduled but the delay to voting also applies to the Somali and Harari regions, which have been beset by legal disputes as well as mishaps such as misprinted ballot papers. The referendum in Southwest Ethiopia was also scheduled to take place on June 21 with the general election, but due to security concerns, some constituencies will not be able to cast their ballots so the election will be held on September 6, 2021.
On security matters, the Ethiopian Security authorities say a reliable security arrangement has been made for a peaceful election in the country. Federal and regional security authorities had an evaluative discussion regarding the security situation in the country.
Director of National Intelligence and Security Services, Temesgen Tiruneh, said that the security apparatus at different levels have made preparations needed to ensure that the sixth general election is peaceful.
The security authorities do seem to have a positive assessment this time around. In a statement issued after the discussion on Monday, authorities encouraged Ethiopians to go out in large numbers and vote on June 21.
Also, Ethiopian Human Rights Commission has also urged law enforcement agencies to act impartially during the election, to respect and uphold the rights of citizens, and to ensure accountability in the event of violations. Similarly, the commission has conducted consultations on the election process starting from June 2 to June 5, 2021 with law enforcement in all constituencies being held with intermediaries from Adama, Jimma, Bahir Dar, Hawassa, Gambella, Assosa and Semera police and judiciary.
For the 547 federal seats and for the 1804 seats in the 10 regional councils including Sidama region according to the election board there are about 46 parties running to power.
According to the board a total of 9,505 candidates from the 46 parties and also 148 individual candidates has registered and run for the race all over the country.
From these 46 parties 17 of them are national parties while the rest 29 are regional parties, meanwhile 18 parties are running to get the vote in the capital, Addis Ababa.
Through the past year the board has been preparing for the election and 48,000 polling stations has been established under 637 constituencies over the country. 38,234,910 voters are said to have been registered throughout the registration period. As the board has been facing problems which also has been affecting the voter’s registration the number doesn’t include voters in Hareri region and some parts of Somali region.
Since January 2019 in an effort to reform NEBE the house of people representatives enacted a new proclamation that reduce the management. To this end, 240,000 poll workers will monitor the voting process while over 46,800 accredited observers and 1350 journalists are accredited to be involved in the election process, that is, those who have passed the accreditation process of the National Electoral Board of Ethiopia.
Beside the security issues due to errors on ballot papers the board has stated that there are problems with 54 constituencies which were found to be in need of re-printing of ballot papers. Among these constituencies, the number of polling stations that have problems with voting is now 27. Accordingly, voting in these 27 State and House of Representatives constituencies will be held on September 6, 2021.
The board mentioned that some of the errors were human made and some done intentionally and some happened in the process work related errors. “The board has taken administrative measures on its employees which is up to prohibition from work for those who are responsible for the error in the ballot papers by mishandling data due to their neglect,” said Birtukan Mideksa, chairwomen of the board on press briefing given on Thursday, June 10, 2021.
The board announced that these constituencies affected by ballot paper defections will take place on September 6, 2021 alongside with the 40 constituencies. Likewise, the second round of election will be held on September 6, 2021, and a total of 64 constituencies will hold their election on the second round election while the expected voters in those areas are still able to cast ballots before a new parliamentary session begins in early October.