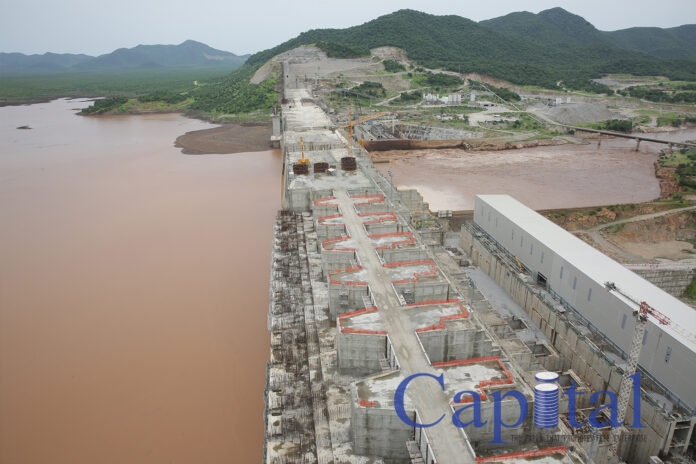 Ethiopia starts the first phase of filling the Grand Ethiopian Renaissance Dam (GERD) on Wednesday July 8, after years of waiting.

Sources at the construction site told Capital that the dam starts catching water mid this week and expects to be filled to some level in few weeks for the first phase.

Prime Minister Abiy Ahmed this week told parliament that it is impossible not to start the filling in this season.  According to sources the primary stage of filling will supply a level of 560 meters above sea level along with the “early generation of electricity”.

Satellite images also show that the catchment area is being filled with water. The filling stages that ensue will see a release based on the hydrological conditions of Abay.

GERD is a 6,000 MW hydropower project nearing completion on the Abay is located about 30 km upstream of the border with Sudan. It will be the largest hydropower project in Africa. Owned and operated by the Ethiopian Electric Power, the 145-m-tall roller-compacted concrete gravity dam will flood 1,874 km2 at a normal pool elevation of 640 m, and will have a tributary catchment of 172,250 km2. With a volume of 74 km3 (of which 14.8 km3 is dead storage), the reservoir can hold about 1.6 years’ worth of average flow of the Abay – 48.5 km3/yr – at the El Diem gage station, just below the border in Sudan.

The GERD project is a majestic hydroelectric plant, which was born in the 60s concerning a vast and far-sighted plan to exploit the Abay potential for hydroelectric purposes and improve management of this huge water resource.

The concrete faced rockfill (CFRD) saddle dam is 60 m high and approximately 5 km long, with an embankment volume of 15 million m3. Its composite cut-off, made up by grouting and plastic diaphragm panels, was conceived to fulfil two different requirements: permeability and erosion control.

The river diversion system, designed to discharge up to 14’700 m3/s, includes four culverts for discharging during the dry season and a temporary stepped spillway structure located in the central part of the dam, for dam overtopping during the wet season.

A system of three spillways safeguards the project against the Probable Maximum Flood (30’200 m3/s peak and 18’000 m3/s routed discharge): the main service gated spillway, located on a saddle area; the aforesaid free-flow crest spillway on the overflow section of the main dam; the side channel un-gated emergency spillway.

The main dam is crossed by sixteen penstocks (8m diameter), two of which at lower elevation committed to early generation during reservoir impounding.

The two outdoor powerhouses are located at the main dam toe on the right and left riverside housing 10 Francis turbine units and 6 Francis turbine units respectively, with 375 MW each. The step-up transformers, erected in the yard between the main dam downstream face and the powerhouses, are connected through overhead lines to the 500 kV switchyard, located on right bank.

The project was made possible to the vision and ambition of the late PM Meles Zenawi, who resolved to fulfil the ancient dream of past emperors. He decided to build the plant directly to its maximum expansion, not in stages.