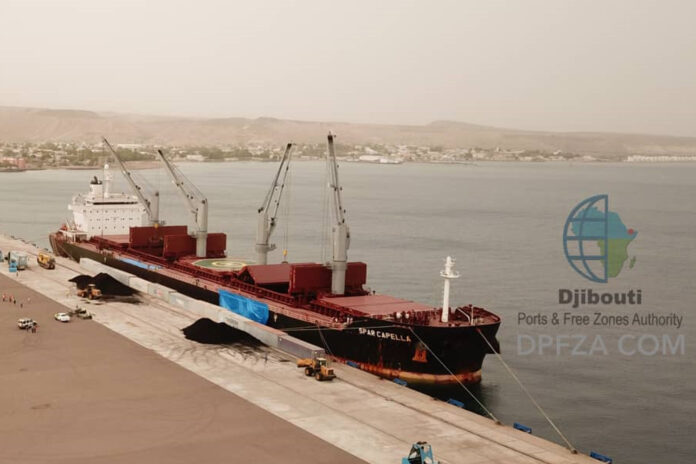 Ethiopian Shipping and Logistics Services Enterprise (ESLSE) announced that it started using Djibouti’s Port of Tadjourah, which received the first vessel on July 17 with Ethiopian cargo.
Roba Megersa, CEO of ESLSE, told Capital that the port, which was idle for years, has now started giving service for Ethiopian cargo.
He said that the vessel with cargo of coal arrived on July 17 and is transported to Ethiopia.
Initially the port has been developed in the aim to transport mainly potash from Ethiopia’s Afar region, while the mining is not yet developed. Besides that the port has a potential to provide for northern Ethiopia.
Roba said that the road from Tadjoura to Balho, a border town, is high standard that is also preferred by drivers. The road that is 120 km and consumed USD 156 million was inaugurated late last year.
The coal imported for cement factories is 50,000 metric tons and is transported by Spar Capella vessel, which is sailing under the flag of Norway, from South Africa.
Compared with the traditional route from ports in Djibouti via Galaffi, the current road from Tadjoura to Balho is high quality and shortens the driving hour significantly, according to the CEO.
“The major share of the 120km road from Djibouti to Galafi is damaged, which forced drivers to drive up to 8 hours to cross the border, while this side may take only two hours,” he added.
Trucks that crossed the border will come at the center via Dechato town of Afar region.
He said that other vessels will also use the port in the coming period as an alternative. “It is a good alternative when ports surrounded Djibouti as the main town is crowded,” he said.
“Ethiopian vessels will use Tadjoura Port since they are equipped with gear, which is a support to unload cargos from vessels, and don’t need crane at the port,” he explained.
Roba said that on a daily basis up to 4,000 tons of cargo can be unloaded, which is very big for the new port and even high compared with the performance in other Djibouti ports.
“For instance on Friday July 24, 2,000 tons of cargo was unloaded and transported by 50 trucks, while in the past days 100 trucks that carried 4,000 tons of coal has been transported,” he said.
Spar Capella is a bulk carrier that was built in 2011 and is sailing under the flag of Norway. Its carrying capacity is 58,000 tones DWT.
The Tadjoura Port, which consumed USD 90 million, has been built to mainly focus on general cargo, such as potash and has a depth of 12 meters with 2 berths of 435m length. This facility is well positioned to serve hinterland and could accommodate vessel of up to 80,000 DWT.
The Tadjourah-Balho road financed by the Kuwait Fund for Arab Economic Development is the third road corridor besides Djibouti-Galafi-Dicheto and Djibouti-Dewalle-Dire Dawa connecting Ethiopia.
In related development Djibouti Shipping Company, formed under Djibouti Ports and Free Zones Authority (DPFZA), has received its first vessel a week ago.
Djibouti Shipping Company’s first ship (African Sun) arrived at Djibouti on 19 July and is set to target to reduce transit time for merchandise travelling from different route.
The ship that targets to bolster regional trade arrived from the Port of Mersin, Turkey and will make regular journeys to Mogadishu, via Djibouti, Berbera and Bossaso. Africa Sun has a capacity of 1,108 twenty foot equivalent units (TEUs).
According to the statement from DPFZA, in addition to import-export traffic, Djibouti Shipping Company will also offer redistribution services for transshipment containers in Djibouti, by major shipping lines and intended for ports in the region.
“Africa Sun is the first step in a major national project to become a key player in the shipping industry,” DPFZA said in its statment.