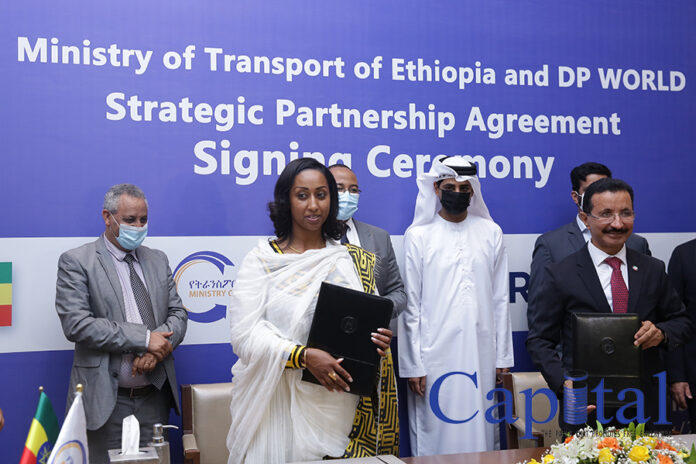 One of the leading global logistic solution providers gets to Ethiopia to develop the Ethiopian side of the road linking Ethiopia to Berbera into one of the major trade and logistics corridors of the Country’s international trade routes.
On May 6, 2021, the Ministry of Transport signed the first Memorandum of Understanding (MoU) on the logistic service with DP world to determine the potentials for developing logistics infrastructure and the provision of end to end logistics services along the corridor to unlock major economic benefits for Ethiopia. Dagmawit Moges, Ethiopia’s Minister of Transport, and Sultan Ahmed Bin Sulayem, Group Chairman and CEO of DP World have signed the agreement.
“Utilizing the Berbera corridor will surely have a potential to make Ethiopia a front runner in logistics operations since the industry is expected to play the leading catalytic role to the national growth,” said Dagmawit Moges Minister of Transport, adding that, “Ethiopia aims to diversify its port access facilities and services to improve its trade corridor access routes. Perhaps the development of this Corridor will not only meet with the growing demand of Ethiopian’s international trade, but it would also enhance our Nation’s capacity in utilizing our existing major corridor both in terms of volume of trade and efficiency.”
By investing up to 1 billion dollar, over the next ten years in developing the supply chain infrastructure along the corridor it is proposed that the Parties would establish a joint venture logistics company to perform logistic operations from origin to destination, DP World will offer services from Ethiopia up to Berbera Port, while for imports, from the port of loading to the delivery of shipments in one of the dry ports in the hinterlands or the final destination of the consignees.
Services include dry ports, silos, warehouses, container yards, cool and cold chain depots, freight forwarding and clearing activities and infrastructure developments including implementation of the IT infrastructure and technology.
“The development of the port will create new jobs, attract new businesses and investment along the corridor, as well as diversify and strengthen the country’s access to international trade by having a direct, seamless and efficient link between Ethiopia and Berbera Port,” said Sultan Ahmed Bin Sulayem, Group Chairman and CEO of DP World.
The road infrastructure that will connect Berbera Port to Wajaale at the border with Ethiopia, funded by the Abu Dhabi Fund for Development and the UK’s Department for International Development, is expected to be completed by the end of 2021. The road will link the existing modern highway on the Ethiopian side and will further position Berbera as one of the key trade gateways in the region and will be one of the fastest and most efficient routes for Ethiopian transit cargo.
DP World has committed to investing up to US$442 million to develop and expand Berbera port, with the first phase nearly completed. Further work is already underway on expansion of the quay to 1000 metres which will increase capacity to two million TEUs, operated by 10 quay cranes.