HomeNewsIMF projects a recession for sub-Saharan Africa in 2020
News 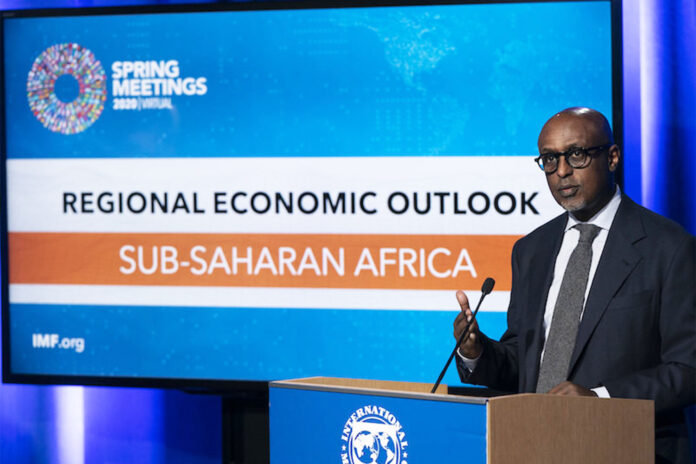 The effect of global outbreak of COVID 19 will contract Ethiopia’s real GDP growth to 3.2 percent in 2020 the IMF Regional Economic Outlook predicts.
The country that in the past 15 years registered higher economic growth particularly in the involvement of public projects, is expected to be highly affected by the coronavirus pandemic that also put the sub Saharan Africa region on serious economic challenge.
The IMF Regional Economic Outlook published in October 2019 forecasted that the country’s real GDP growth will stand at 7.2 percent in 2020.
However as many other countries in the region because of the effect of the virus the economic growth will sharply decline by over half than the previous projection.
In the latest outlook published in relation with the joint spring meeting of the World Bank and IMF with member countries the real GDP growth of Ethiopia will be limited to 3.2 percent for the year.
Even though the growth rate projection for the year is lesser than the previous forecast it is still one of the biggest growth in the subcontinent.
According to the IMF projection in the sub continent the biggest economic growth will be registered by South Sudan, Benin, Uganda and Rwanda.
The latest outlook indicated that the stated countries real GDP growth will stand at 4.9 percent, 4.5 percent, 3.5 percent and 3.5 percent respectively and Ethiopia and Senegal will follow by 3.2 and 3 percentages respectively.
The sub continent regional outlook projection indicated that Ethiopia’s real GDP growth for the year 2021 will be at 4.3 percent that mean it will show slight improvement but it is very far compared with the previous growth path.
IMF Regional Economic Outlook published in October 2019 forecasted that Ethiopia’s government debt in 2020 will be 54.4 percent of the GDP from 59.1 percent in 2019. Meanwhile the latest projection increased the debt share of the GDP to 56.9 percent for 2020 and that will also reach 57.6 percent in 2021.
The overall fiscal balance including grants for the year 2020 will stand at -3 (negative three) percent.
The latest report added that Ethiopia’s external debt will jump to 29.9 percent in 2020 that was expected to stand at 28 percent of the GDP in the previous IMF projection.
In its recommendation IMF advise countries that fiscal, monetary, and financial policies should be used to protect vulnerable groups, mitigate economic losses, and support the recovery.
“Once the crisis subsides, fiscal positions should return to sustainable paths,” it said.
Ethiopia is allocating huge amount of resource to fight the spread of the virus besides the private sector, which is highly affected by the situation, which is putting its effort to mitigate the virus effect.
So far employers are ordered not to lay off their employees and real estate owners are also cutting office and shop rental fees that will have direct effect on the tax collection.
IMF stated that the real GDP in sub-Saharan Africa in general is projected to contract by −1.6 percent in 2020, the lowest level of growth on record. This is about 5.2 percentage points lower than envisaged in the October 2019 Regional Economic Outlook for Sub-Saharan Africa.
The sharp downward revision largely reflects the fallout from the spread of COVID-19 and lower-than-expected commodity prices. In addition, idiosyncratic factors, such as continued structural constraints (South Africa), policy adjustment (Ethiopia), and climate and other natural shocks (such as the locust invasion in eastern Africa) have also contributed to the downward revisions.