The ten year plan that would have a shift on commodity export from agriculture to industry has been ratified.
By 2030 the country revenue from tax is expected to reach to 3.5 trillion birr.
The ten year plan, that will be implemented in two-five years period revealed that the country export goods will have a shift from the traditional agricultural commodity to the manufacturing sector.
The development plan matrix that was officially issued early this week indicated that by 2030 the export share of industrial goods will have a share of 48.4 percent from the total export. As of last budget year the manufacturing sector export contributed only 13.3 percent of hard currency earnings for the country. The new plan will boost the manufacturing export share by more than 3.6 folds from the base line of last year.
In contrast, the agriculture sector contribution will be contracted to 36.4 percent from the existed 77 percent, which is more than a double reduction. The mining sector that has received higher attention by the current government is also expected to take the share of 11.3 percent from the total export from the existed 6.9 percent.
The export of commodities is targeted to grow by six folds at the end of the planned year reaching USD 18.3 billion, while the share manufacturing industry will contribute USD 9 billion, agriculture USD 6.7 billion, mining USD 2.1 billion and electric and others USD 0.7 billion. 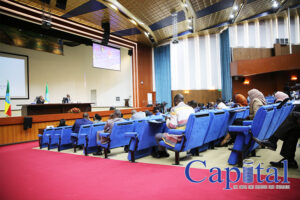 In the fiscal policy development, the government has targeted to register an average 26.1 percent annual growth on gross government revenue in the coming decade reaching 3.9 trillion birr from the past year’s 395 billion birr.
The tax revenue share will be 3.5 trillion birr by the growth of over 11 folds compared with 317 billion birr of last year’s performance.
The tax GDP ratio is expected to climb to 18.2 percent from 9.2 percent of last year.
The government expenditure will also reach 4.5 trillion birr at the end of the planed year from 480 billion birr of the 2019/20 budget year, while its share for GDP will be 23.4 percent. However, the budget deficit is projected to continue at 3 percent in the first five year period and 2.9 percent in the second five year.
On the other hand the country’s debt will stand at 48.6 percent of the GDP by 2030.
At the end of the ten year development plan, the share of agriculture for GDP will be 22 percent from the existing 32.7 percent, industry from 29 percent to 35.9 percent, and the service sector share will be increased to 42.1 percent from 39.5 percent.
In addition, the manufacturing sub-sector from industry sector is expected to register massive growth and share from the current 6.9 percent to 17.2 percent at the end of the ten year plan.