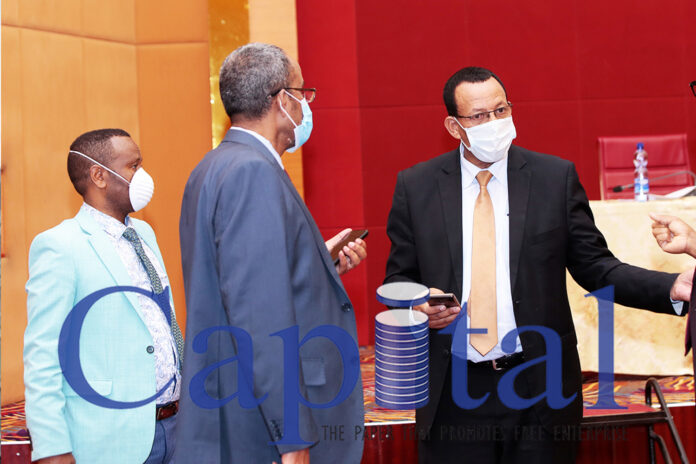 The Ministry of Trade and Industry (MoTI) criticized some basic commodity producers for abusing the situation, meanwhile it has promised to provide adequate support for those lacking input to continue their operation in full scale.
On the discussion that was held with local edible oil pressers, millers and related product producers, Abdulfetah Yusuf, head of the Addis Ababa Trade Bureau, stated that there are companies that played their role to mitigate the challenge and supply their products on fair price with adequate quality.
But there are producers that are abusing the system and trying to use the opportunity to amass significant profit, according to Abdulfetah.
“We have evaluated producers engaged in mega hoarding, fixing price with wholesalers, production of substandard products like hand sanitizers,” he said.
On his presentation on the discussion that was held on Thursday April 7 at Intercontinental Hotel the bureau head said that some producers offered highly volatile price and are not interested to supply products like consumers association, and some of them force consumers to buy one product to sell another.
“Producers are providing their products for limited wholesalers on the aim to escalate the price and the price is determined by very few actors that distribute the product for responsible retailers like consumers associations,” he added.
He has mentioned companies like oil pressers, millers, pasta and macaroni producers that are engaged on illegal activity.
He said that the price of some basic commodities increased in relation with the outbreak of COVID 19, meanwhile the revenue of significant part of the society declined because of the situation.
During the discussion local companies also claimed that even though they have the capacity to produce in bulk that stabilize the market they do not get support from the government to access foreign currency for raw materials.
Tewodros Tadesse, Communication Head of Shemu Group, said that despite his company’s huge capacity to press edible oil at the plant at Dire Dawa it is not getting adequate attention from the government.
He said that Shemu has 850 employees with the capacity of 220 tones production per month but now it is running with the production of ten tones per month.
He told Capital that currently the company is undertaking expansion which they so far accomplished 90 percent and expand the production to 870 tons per month but the company is continuing under its capacity that he said is almost nothing compared to its capacity. Currently Shemu is producing only 10 tons of oil per month because of lack of input.
“We are not getting foreign currency to import crude oil for the production of edible oil, while finished products importers are supported by the government,” he said.
Representative of East Africa Holding that also has oil presser at Harar claimed that his company is facing similar challenge to produce the basic commodity.
Some pressers have also called the government to subsidize companies to get raw material from local market on reasonable price that would lead for lower price for end products.
At the meeting Eshete Asfaw, State Minister of MoTI, said that the local supply on edible oil for instance is very high than the demand but the price went up significantly.
“Some supermarkets observed this week are selling 5 liter oil with 500 birr but the total cost for imported oil is less than 300 birr,” he said.
“We have also evaluated the local pressers trend; it is similar regarding price hike without any proper reason,” Eshete said.
Eshete appreciated the effort of companies like Shemu and East Africa and promised to give adequate attention.
Tewodros said that they are delightedly and expect a quick response from the government.