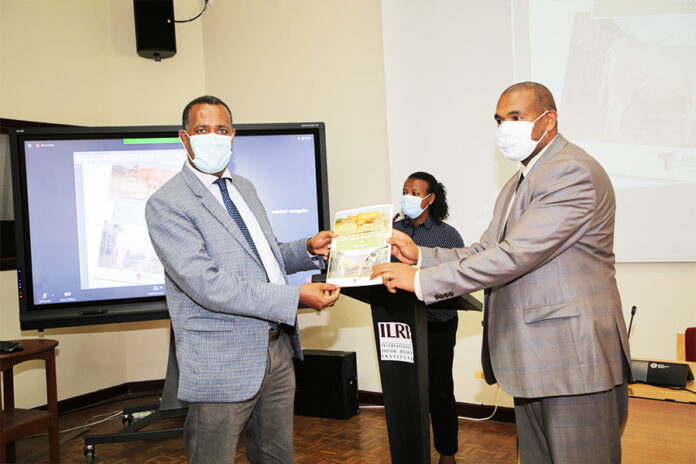 Ministry of Agriculture targets to triple the dairy production in the coming decade to 10.4 billion liters, while access to improved genetics in the sector has acquired prior attention in the strategic plan.
On similar developments, the first dairy animal parade was held early this week which was organized by the International Livestock Research Institute (ILRI) and the National Animal Genetic Improvement Institute (NAGII).
During the parade held on Tuesday March 30, it was disclosed that the farmer-feedback systems which assist farmers to improve their productivity was piloted successfully.
The information of ILRI indicated that milk production in developing countries, including Ethiopia, is dominated by smallholder dairy farmers, each keeping 1-3 dairy cows. Majority of these farmers are not currently extracting optimum benefits, because herd and cow production, and productivity levels remain low. 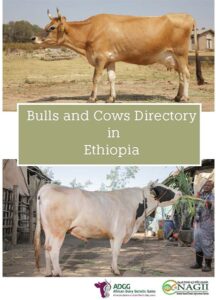 It explained that in Ethiopia, African Dairy Genetic Gains (ADGG), farmer and country-focused ILRI-led project, is jointly working with NAGII, and other domestic and international partners. To this end, the program objectives are to establish performance recording and sampling systems in Ethiopia and Tanzania. The information and samples will be used to develop systems to select crossbred bulls and cows of superior genetic merit for artificial insemination (AI) and natural mating; pilot farmer-feedback systems that assist farmers to improve their productivity; and establish public-private, non-government organizations, and producer partnerships necessary for funding and scaling the on-going ADGG program into a regional platform.
Under the pilot program that took five years, the very best males were selected to provide semen for AI through national and regional AI centers in Ethiopia. “This way, the genetic variability among and within cattle breeds in Ethiopia are being efficiently exploited, while at the same time a population of resilient yet productive dairy genetics is slowly being built,” the ILRI document explained.
The project routinely captures herd performance records of individual animals, their production environment and genomic information. The data generated is used to identify appropriate dairy genetics, including crossbred bulls of superior genetic merit for increased milk production, fertility, longevity, and resilience. ADGG is operating in 98 districts in Amhara, Oromia, SNNP, Sidama, and Tigray, regions, and Addis Ababa.
Elite animals have been certified and promoted to AI centers, the top 3 locally adapted crossbred bulls were transferred to AI center for wider national use.
Asrat Tera, Director General of NAGII, said that the new initiative has its own roll to reduce the demand for foreign currency for the import of semen.
MoA has targeted to expand the market oriented milk product and productivity for the growing demand in the country.
Fikiru Regessa, State Minister of Agriculture, reminded that the country is endowed with large population of cattle but the product and productivity of milk is low in terms of fulfilling the existing demand, “It needs to be linked with improved genetics, animal health, feed, and husbandry practices.”
He told media that the ministry projects to boost the milk development to 10.4 billion liters by 2030 from the current four billon liter.
Fikiru, who is also a molecular biologist and a genetically engineering scientist by profession, said that to attain the goal MoA is working with NAGII in collaboration with international partners to expand and improve animals in the sector, from the current poor level.
He said that from the targeted milk production, the cattle sector will take the major share, while camel and goat milk is the other product.
In Ethiopia’s livestock sector, improving the genetics has been conducted for many years for breeding purposes. For the last seven decades, the country had imported semen for breeding with local animals for better output. However, there was some initiative for the assessment of required and actual data was not properly registered regarding the production of milk, health and breeding value at the farmers’ level.
Under the current program, it has been covered on selected sites alongside an organized database for the identification of best performing animals.
According to experts, the program has achieved ‘identifying the expected results.’
The ADGG program supports Ethiopia’s national dairy recording center to operate a digital data capture platform that has enabled more than 70,000 dairy herds and 110,000 animals to be registered and their pedigree and performance data recorded.
Genomic information is captured on a sub-set of the animals and all records are appropriately analyzed to generate breeding values that are used to rank animals.
Currently, about 3 million of the total cattle population is included on improved animals in Ethiopia, while the total number is 61 million. “We select the top performing bulls to provide semen for AI through national and regional AI centers in Ethiopia and circulated to the farmers. It replaces the cost of foreign currency allocated for the import of improved bulls,” Fikru said.
“This way, the genetic variability among and within cattle breeds in Ethiopia are being efficiently exploited, while at the same time a population of resilient yet productive dairy genetics is slowly being built,” the ADGG document explained.
“It will also scale up the scheme since farmers would get information about the current initiative,” the State Minister said.
Improved cows give about 15 liters of milk per day, while local cows’ average milk production is 1.5 liter per day.
“We have to focus on production based husbandry practices than increasing the number of animals,” Fikru explains, “the ten year strategic plan has also given main attention to the expansion of improved animals coverage.”
The 14 AI centers will manage the plan with different breeds. According to Fikru, synchronization and scaling up will be the next mission and facilities and infrastructures requiring empowerment have got attention by MoA to fill the growing demand.
He added that the private sector as investor and public private partnership will also be part of the initiative. “Currently, the involvement of the private sector in related with improved animals’ development is concentrated in urban areas but that is supposed to be expanded and grown, thus the government will have different initiatives to attract the private sector,” he expounded.
In the aspect of giving attention for improved breeds, the government is further looking for feeds for the animal as per the demanded level. 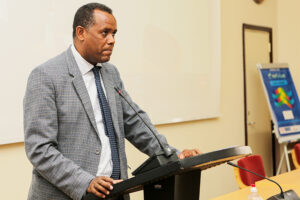 “Currently, the feeding center like open grazing land have deteriorated thus farmers are now alert and prefer to focus on quality than quantity of cattle which boosts the demand for improved animals,” the State Minister said.
Presently, there are four animal feed sources; open grazing land, which is highly reduced because of urbanization, crop agriculture mixed that dominate the mid and highland areas, whilst the third source is improved animal feeds and multipurpose trees that shall accommodate as alternative at densely populated areas. Fourthly, industry wastes are also an alternative which have been used in commercial farming.
“Improving the sector would not have any positive result without giving focus to the feeding system thus animal feeding has got proper attention, however, there are certain challenges,” Fikru stated amplifying the commitment of his ministry.
The dry season irrigation based harvest from mainly the wheat production that includes the low land will expand the feed security for not only the sector in general but also for pastoralists.
The first Ethiopian dairy bulls and cows’ directory that was stated as a milestone for the sector was also launched at the same event. In addition, the dairy animals’ catalogue application was also introduced.