On Friday, March 13, Minister of Health Lia Tadesse confirmed Ethiopia’s first Coronavirus case, and since then, cases have risen to nine, with the government launching a manhunt for several others who may have come into contact with the patients.
Following the numerous deaths and several cases of infection throughout the world, the World Health Organization declared the Covid-19 virus a worldwide pandemic.
Several countries have been forced to close their borders, declaring nationwide lockdowns as a way to combat the deadly virus.
Ethiopia’s economy nose-dived ever since the first victim of corona virus was announced.
The increasing demand of health care expenditures and food items results an increase on the price of daily consumed goods. The fight against the pandemic will have a direct impact on the fiscal space. It will increase the cost of health care provision, in the form of costs for prevention, testing, identification, isolation and care.
According to the Ministry of Trade and Industry, it has formed a national task force to control the situation, “nationally the task force took measures on more than 3000 traders who were inflating price of goods illegally,” and also to help the public the government has prepared handmade sanitizers and distributed it in the capital.
In three days the number of victims has reached four and on Monday March 16, 2020 the government has decided to close schools across the country, including higher education, gatherings and sporting events for two weeks. However, in the next few days people were seen scrambling to get their hands on some sanitizers at public pharmacies.
The virus which started at the end of December 2019 in Wuhan, China has shocked the world with its high spread which the World Health Organization (WHO) categorized the virus as a global pandemic.
Countries are closing borders, restricting mobility, instituting strict surveillance measures, establishing and operationalizing quarantines. 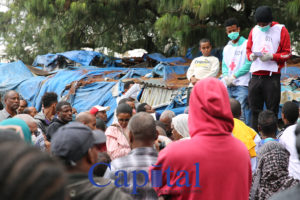 As an import dependent and supply constrained economy, one major channel through which the pandemic will be affecting the economy is through affecting imports. As of now, China, the manufacturing hub of the world and the number one import sourcing country for Ethiopia, is stuck. Middle Eastern countries, European Union and North America have also imposed their own flight restrictions. This means that importers could no more travel to make orders, freight forwarders could not effectively facilitate trade and transistors could not do the facilitation as they would normally do. Shipping lines will also be affected by the travel bans and it will take more time for cargo to be transported due to new protocols in terms of certification.
PM Abiy in his last remark stated that through the high spread of the corona internationally, the country’s dependence on imported items is difficult and to import needed items through this can cause delay and additional cost on projects and exporting rate of the country is declining, “the last few month growth rate of the country was good, but it may not continue” the economy remains weak he added.
Inflation has lately been increasing so fast that the annual inflation stands at 21.8%.
Real GDP growth slowed to an estimated 7.4% in 2019 from 7.7% in 2018, caused by social unrest and fiscal consolidation to stabilize the public debt.
In light of this, the COVID-19 pandemic will have multiple channels through which it will impose a burden on the economy.
Service providers are highly affected, in fear of the virus most of market centers and malls closed their doors for the coming couple of weeks. At the end of the week the prime minister has ordered night clubs and bars to be closed. Due to the sharp decline in travel, meetings and summits internationally and also nationally are cancelled, the hotel and tourism sector of the country is affected as anyone who enters the country from now on will be quarantined for 14 days.
Even if much of the negative effects of the virus relies on the weeks ahead and the struggling economy of the country although, it is affecting other aspects of the nation, including the religion and cultural aspects.
In his latest announcement the prime minister said due to the fear of the virus religions and religious activities held by gathering of people should be considered as one of the means of transmitting the virus. “They {religious leaders} should coordinate their acts towards preventing the spread of the virus,” he added.
On March 7, 2020 the government has announced that it has allocated 300 million birr to the fight against the virus. Also other private and public stake holders are also providing their effort to support the government but this seems to be small, compared to the risk related to the pandemic.
As the prime minister stated if the corona situation continues, the coming election may not be held at the planned time, “the board will study and assess the situations to give the right decision,” he said.